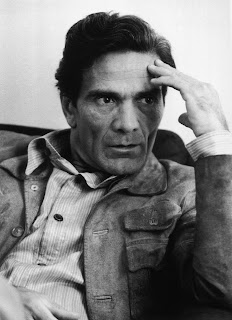 s at us with a look of intolerable victory: its verdict is that all we have ever loved shall be taken from us forever. »
Pasolini’s most famous essay is entitled: “the power vacuum in Italy”, although it is more often referred to as “The disappearance of the fireflies.”
Pasolini, with his hybrid of Catholicism and Communism, his deep sense of peasant culture and his sexual alienation from same, was one of the great post-war observers. To observe is to synthesize. He noticed the hardest thing to notice – because the hardest thing to notice is the change that happens all around us, and not at geological speed either, but in human time. For instance, he noticed the death of a culture that went back around 4,000 years. Rural idiocy was replaced, rapidly and completely, by techno-idiocy. And its effects were to move mountains, literally. We no longer have to have faith the size of a mustard seed – mustard seeds are definitely obsolete. We just have to have faith in our ones and zeros, our synthetics, our gene splicing, our Glyphosate, Atrazine and Lambda-cyhalothrin, our Parathion, Malathion, our Chlorpyrifos.
The price we pay is to lose any sense of the longterm. The memory palace has been looted. The ancestors have fled, and we all calmly accept that our grandchildren will be living near dead marshes, sunken cities, on a planet that has heated up, in spots, to Martian temperatures; a planet in which the Gulf current is extinct; a planet in which the glaciers no longer store our fresh water, and we have no substitute. The short term is now fully incorporated into the get-it-now economic system, and that is that. We’ve signed in blood.
In his essay, Pasolini used, as a central mark of the changes that had been wrought in Italy during the Demo-Christian era, the disappearance of the fireflies:
“At the beginning of the sixties, the fireflies began to disappear in our nation, due to pollution of the air, and the azure rivers and limpid canals, above all in the countryside. This was a stunning and searing phenomena. There were no fireflies left after a few years. Today this is a somewhat poignant recollection of the past—a man of that time with such a souvenir cannot be young among the young of today and can therefore not have the wonderful regrets of those times.
The event that occurred some ten years ago we shall now call the “disappearance of the fireflies’”.
Since Pasolini’s murder, in 1975, the disappearance of the fireflies has become a recognizable trope. Sciascia’s famous polemic on the Aldo Moro kidnapping begins with a reference to a firefly that Sciascia sees – and his memory of Pasolini as someone who understood the massive corruption of power in Italy. In 2009, Georges Didi-Huberman wrote a book, the Survival of the Fireflies, that took up the political meaning of the exaggerations of Pasolini, and makes the case against the apocalyptic turn.
Well, in 2009, it might have seemed like the Occupation moment would surely lead to something. In 2018, that looks less likely; this is why I found this article on a recent survey of insect life in Germany so interesting not only in terms of our seeming inability to stop ourselves from destruction, but also our inability to even see it.
“A study published last fall documented a 76 percent decline in the total seasonal biomass of flying insects netted at 63 locations in Germany over the last three decades. Losses in midsummer, when these insects are most numerous, exceeded 80 percent.
This alarming discovery, made by mostly amateur naturalists who make up the volunteer-run Entomological Society Krefeld, raised an obvious question: Was this happening elsewhere? Unfortunately, that question is hard to answer because of another problem: a global decline of field naturalists who study these phenomena.” 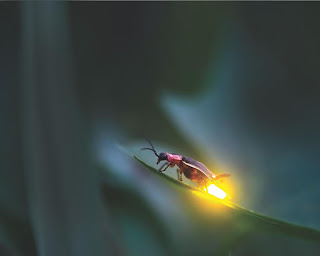 For those who have read Pasolini, there is something eery about the way articles such as this one illuminate the double loss that he raged about: the loss of the Holocene and the loss of the sweetness of human life, up to an including the knowledge of nature. Not knowledge simply as an act of monetizable genesplicing - knowledge as love for its object.
Pasolini’s poetic-literary approach brings together natural and human history in one enormous stroke. The disappearance of the fireflies is not simply a fact of concern for naturalists – it is a fact that has a bearing on memory, on the bonds of one generation to the other, and even on the enormous invisible losses that come with ‘creative destruction’ and that refuse to be registered by the political forces that express themselves day after day, and now minute after minute, in the media. By noticing the fireflies, Pasolini breaks out of the parochial discourse of blame and offense in which both the hegemonic party and the oppositional movements in Italy were stuck, like flies to flypaper.
Pasolini’s words became famous, but the signal he sent out died. Nobody ever formed a firefly party. The machine did not stop. The treadmill of production and consumption continued to roll over the planet, producing the routines that make it really impossible to notice that there are no fireflies, that you can’t see the stars at night, that the elms are disappearing, that there are no bluebirds in the garden. Making it impossible to see where you live and what has changed.
Perhaps just as the disappearance of the fireflies marked a cut in the Holocene humanness of Italy, and the disappearance of insect diversity in Germany marks the end of an environment that has existed for the last 14,000 years in that part of Eurasia, we can also mark the appearance and population explosion of other insect, animal and vegetable species, who, like humans, are cleaning up in this short period of time. For instance, the bark beetles in North America.
The bark beetle has a pretty simple lifecycle. The adult beetles dig into the bark of trees, and lay eggs there, as well using the cover of the bark to survive the cold weather. Many of the pupae that hatch from the eggs die off, due to cold temperatures. Some, however, survive, enough that another generation of pine beetles will again lay its eggs.
This simple lifecycle has been sped up by the last Conquista – the conquest of the atmosphere. In terms of the lifecycle of the European movement outward, the first conquest was that of the Americas, the second the partial conquest of Asia, and the third that of Africa. The fourth seizure is of uninhabited atmosphere, which is “free”, and which has been laid claim to by Western industry and now global industry. Just as the conquest of the Americas was accompanied and made possible by a mass dying – the mass dying of the Amerindians, due to the diseases carried by the Europeans – the conquest of the atmosphere is also leading to a mass dying, from which the descendents of the Europeans are averting their eyes.
“From the mountainous Southwest deep into Texas, wildfires raced across parched landscapes this summer [2010], burning millions more acres. In Colorado, at least 15 percent of that state’s spectacular aspen forests have gone into decline because of a lack of water.
The devastation extends worldwide. The great euphorbia trees of southern Africa are succumbing to heat and water stress. So are the Atlas cedars of northern Algeria. Fires fed by hot, dry weather are killing enormous stretches of Siberian forest. Eucalyptus trees are succumbing on a large scale to a heat blast in Australia, and the Amazon recently suffered two “once a century” droughts just five years apart, killing many large trees.”
The natural history of the Americas and the political history of the moment are, it seems, joined in ways that are a mystery – or rather, that are made a mystery. We actually register these things, but out of the corner of our eye.
And this is the political party we need to form: a corner of the eye party. A firefly party. An aspen party. The treadmill of production is deafening, but perhaps we can plug our ears enough to look around. Look around and recognize that the unemployment we face and the massive inequality of wealth that has seized the developed world with the implacable and mechanical force of a bark beetle infestation and that infestation itself are all parts of one thing: the politics of the Holocene. These are the stakes. And if we lose the Holocene to the hedge funders or the coal plants or oil companies or offshore money, we lose everything.
“But for the natives…God’s hand hath so pursued them as, for three hundred mile’s space, the greatest part of them are swept away by smallpox, which still continues amongst them. So as God hath hereby cleared our title to this place…” John Winthrop