Roger Gathmann January 24, 2023
I am a great admirer of Wolfgang Schivelbusch’s “History of Train 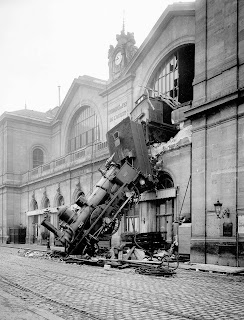 Rides: on the industrialization of space and time in the 19th century.” It is through Schivelbusch’s history that I grasped a social force that has continued up through ChatGPT: that the “modern era” is defined by a series of perceptual shocks and absorbances. Schivelbusch began researching the early response to the train and found that the speed at which trains travelled had a definite effect on the sensorium of the early riders.
In the twentieth century, instruments were often dubbed the “extensions of man”. It is against this organic notion that Schivelbusch writes, since his sense of the industrial complex sees “man” divided up into different specializations: here’s the customer, here’s the conductor; here’s the coalminer, here’s the economist; here’s the victim of the accident, here’s the insurance company.
The power of steam was distributed over a number of industrial branches - perceptual shock and absorbance is detectable in all of them. The early users of steamboats were impressed by the way these boats could proceed in straight lines, as opposed to the continual manoeuvring of sailboats against and with the wind and the tide. The Titanic was by no means unusual as a boat disaster: the day before June 16, 1904 – Bloomsday – the General Slocum caught fire and sank in the New York City harbor, killing 1,000 some people, an event that is submerged in the stream of all events in Ulysses. However, the Titanic making its straight line into an iceberg bore mythic proportions in relation to the original marvel of the steam engine, its disregard for “eotechnics”, as Schivelbusch puts it. The railroad train is an even more obvious monument to the end of a certain seemingly timeless perceptual reign. As writers of the time commented, the passengers on a railroad train were cut off from a former primal assumption: that travel and distance over land can be measured in animal exhaustion. Going at some ten to fifteen miles per hour, the passengers on a coach could very well see that the miles travelled equalled the animal energy expended. This was absolutely not the case with the railroad. Mechanical exhaustion was of an entirely different order. And this order was in disjunct with the perception of speed.
After quoting a Saint-Simonian, Constantin Pecqueur, about the railroad’s ability to “bring the provinces to Paris”, Schivelbusch notes:
“The idea that a French provincial city would find a place on a Parisian street communicates with the fact that the alteration of spatial relationships through the speed of the railway train is not a simple process of the ‘shrinking’ of space, but a double one of the shrinking and expansion of space. The dialectic of the process is that the shrinking of the temporal dimension brought about by transportation is, as well, the expansion of transportable space. The bringing together of the nation and the metropolis appears, inversely, as the expansion of the metropolis… The epoch of the suburb, that countourless growth of the once enclosed cities, into the countryside begins with the railroad.”
Schivelbusch’s book is what I turn to when I read about some great new technological leap. The current leap – the ChapGPT – is being processed in terms of a perceptual shock that will, of course, lead to a perceptual absorbance, in the same way we have absorbed the death of the camera and the birth of the phone camera. The noticing, here, is particularly acute by academics, who are well aware that mechanisms that automatically write text are going to be jumped on instantly by students. In fact, anybody who thinks about it knows that teaching is based, very much, on automatism – you teach primary kids the alphabet, reading, adding, multiplying and dividing so that as they go on in life they will absorb these things as a second nature. That a machine can reference another machine – Google – find relevant references (a carrying out of Grice’s program of implicature) and organize these things in texts is not a real leap. It is, at most, an after leap from the skip-rope of algorithms we already all know how to do. My gmail offers me replies for emails, and I can imagine a whole correspondence of “yes” and “no” between my email and a correspondent in which neither of us actually look at the email.
A nightmare is still a dream. We are long past the point in which our environments are not half machine dream. Is this a bad thing?
Like
Comment
Share