On the ending of novels 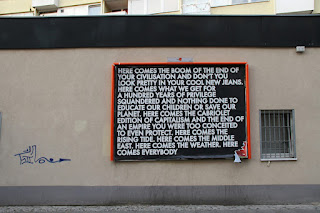 Like the groundhog in Pennsylvania who sticks his head out of his hole every February to check on his shadow,  Viktor Shklovsky survived from the beginning to the Brezhnev stagnation by sticking his head out at the right time, understanding how the shadows fell, and finding just the right burrows to hide in if it was killing season. In 1978, he gave a series of interviews to an Italian Slavicist, Serena Vitale, who fled Moscow with her tapes after being pushed around by the KGB. The book was published in Italian and translated into English (Shklovsky: witness to an era), and it is as aphoristic as fuck, just like you’d expect.

There’s a passage about the problem of ending, a perennially fascinating topic.

-SV “So on the one hand, the impossibility of knowing the future makes it so that a writer can’t “finish” his novels; on the other, it seems like the great novels you’ve been talking about contain some sort of prophecy of the future.

-S: The fact is that the writer “predicts” the future, but doesn’t know what his role in that future will be. He struggles with the future, he’s afraid for himself . . . You see, he has to be very naïve to delude himself into believing he can bring something to a conclusion. And I myself, with all the love I have for novels, I prefer to doze off before the denouement. About epilogues—Thackeray wrote that they’re like the lump of sugar left at the bottom of the cup. That’s it—the conclusion, in the novel, is a cloying additive.”

Shklovsky thought in terms of jumps, of knights moves, of instinctive connections, or synaptic disconnections, or run-arounds, work-arounds. He could make up an argument as well as any intellectual – an intellectual can be defined as a fabricator of arguments. If there is such a thing as a pseudo-intellectual – a term that I think is meaningless, since it applies to all intellectuals and to none – the mark of the pseudoness is an inability to make an argument. However, Shklovsky saw beyond his own intellectual position, saw how an argument limits our view of the world.  The question is, of course: how can one write an essay, a criticism, a discourse, a text, without an argument? Isn’t that bound to become a boring association of thoughts?

The solution is to make the thoughts striking, interesting in themselves.

What is interesting is opposed, on one plane, to what makes one “doze off”. The interesting is insomniac, the end, to use Shklovsky’s image, is narcoleptic – or the maker of narcolepsy in others. Man without Qualities and In search of Lost Time literally don’t end – Finnegan’s Wake ends by throwing the reader back to the beginning. Thomas Mann’s Magic Mountain seems not to end – it seems like it could just keep going on. War and Peace was meant to begin with the book it never became, the Decembrists. Perhaps every novel, or every novel of a certain personal canon, is haunted by the ghost of the ending it never achieved. Ghosts stalk the insomniac and the narcoleptic, just in different ways.

In another way, the interesting leads, by its own complexity, to sleep not insomnia. In this sense, dozing off is just the right ending for a novel – the one provided by the reader.