N: THE FIRE THAT CLINGS TO EVERYTHING - PART 3 THE END 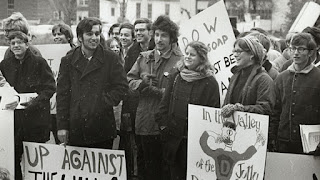 -         In 1966, a  campaign against the manufacture of N. began in Redwood, California, a harbor town on the San Francisco bay. Standard Oil Company, the enterprise that had built the test Japanese and Germany structures for the War department in 1942 applied to the town council for a permit to sublease their facility to United Technologies, which plans to produce 100 million pounds of N. there. Protestors gather together a number of professionals – engineers, English professors from Stanford – to block the permit. They fail. However, the protests against N. are widely reported. Ramparts magazine, a leftist Catholic periodical, published an article (January, 1967) about N. used in Vietnam by William F. Pepper,  with color photographs of children among the burn victims.

-         In January 1967, in the Ladies Home Journal, Martha Gellhorn published a report about her visit to hospitals in Vietnam. There, unlike a number of physicians on the payroll of the military, who had been quoted as saying that there was no record of Vietnamese children burned by N., she found them. “N had burned his face and back and one hand. The burned skin look like swollen, raw meat; the fingers of his hand were stretched out, burned rigid. A scrap of cheesecloth covered him, for weight is intolerable but so is air.”

-         Other countries, other stockpiles of N., other wars. The 1967 war – Israel and Jordan. The war against Amazonian tribes – Brazil. The war against the campesinos, 1960s – Bolivia. Falkland Islands war – Argentina. Afghanistan – the Soviet Union.

-         “On the afternoon of 1 June 1982, a prisoner of war work detail under the supervision of an Argentine officer and guarded by three British solders was engaged on the task of moving ammunition from near the sheep-shearing shed when there was a loud explosion. A very fierce fire began and although rescuers managed to pull the injured clear one prisoner of war was seen to stagger back into the flames. Attempts to reach him failed and a sergeant of the British forces, who had, over a period of some minutes, been repeatedly driven back by the heat and flames and who thought the prisoner was beyond assistance but still alive and in agony, obtained a rifle and fired three or four shots at the man.”

L., according to family myth, was an angry man during the last years of his life, because he couldn’t sell his gun designs to the Americans. He dictated insulting letters to Woodrow Wilson. My grandmother, his secretary, would take down his words and then throw the letters away. Safest that way. At least, this is one version of family myth. L. was apparently obsessed with guns.  L. made a shot at alerting the U.S. population to its vulnerability – one in a long line of such warnings, all leading to more weapons, better weapons, more research money, more interventions, invasions, coups – on August 22 1915. It was advertised on the front page of the NYT: “We need Unsinkable Battleships: L., Inventor of Famous Gun, Explains New Invention offered to Our Government.” This must have been a sweet moment for L., as the New York Times was in the cabal of those who declared his earlier gun invention “a failure”. He did venture a paragraph that might, in retrospect,  have been intemperate:

“Unsinkable battleships are no mere figment of inventive imagination. Germany has such ships already. I know because I myself furnished the designs.”

L.’s opinion seems to have been that the U.S. should go it alone, arm itself to the teeth and wait to see what was left of Europe.  Instead, Woodrow Wilson “betrayed” him and the U.S. entered the war on the allied side on April 6, 1917. I could imagine that every day after that was a headline followed by an apoplectic fit. He died on June 4, 1917.

- After the war, the family decided that Germany had stolen certain of L.’s designs. The stories that came down to us, the grandchildren, were confusing. Was it the Germans or the American government that was to blame? Did Congress take away L’s patents? Did he really have as many as Edison? Family stories tend to grow murky around the detail’s edge. Only recently have I researched L.’s record. The heirs sued both the U.S. and the German governments for patent infringement. In 1924, the claim that the U.S. government used a technique for processing dried gunpowder using an L. patent without permission was rejected. Then, it  seems his heirs – my grandfather among them -  sued Germany for 100 million dollars. The case failed. According to the International Court, “both prior to and since the World War American inventors have been entitled, on taking the measures prescribed by the German statutes, to have issued to them letters patent protecting their inventions. On the failure the patentees, or those claiming under them, to pay the German Government the annual fees required by these statutes, the rights acquired under the patents are lost.” Judgment recorded, March 19, 1925.

- L.’s face: a drawing of him in old age, with a goatish beard, hiding behind mad scientist spectacles. The very image of the crankish professor, although to my knowledge, he never had a degree. American inventors in the 19th century did not have time to attend university classes.

- In the post-Vietnam downer, as the mission wound down and Saigon fell, the military began to realize that N. had become a bad take. The ashy trail it left behind, the photographed, the televised pain, it all became a voodoo curse, penetrating even the buzzcut mindset of the Generals. Even the movies had turned against them! And so one of the great tools of graduated reprisal had to be put back on the shelf, so to speak.

- So to speak – because it turned out not to be so easy to get rid of the stocks of N. that had accumulated during the war. There were “33,800 aluminum canisters [stored] since 1972 at the Fallbrook Naval Weapons Station.” The Fallbrook station had been “commissioned” in 1942, the year of big projects, and was located next door to Fallbrook, at that time “a sleepy agricultural town” in the northwest corner of San Diego County. It was part of the network of military sites that helped drive San Diego in the postwar period, until these sites became a less obvious good – encroachment on potentially valuable real estate.  In 1983, the Navy, with the encouragement of Southern California’s Congressional delegation, began to search for a  permanent disposal of the by now notorious weapon. However, due to N.’s PR – at one time as a uniquely fearful weapon against the Communists (good), at another time as a uniquely criminal weapon that “sticks to kids” (bad) – it was not easy to find a community that would welcome this particular business. In 1983, still not gauging the need to win hearts and minds in America, the Navy contracted with Bud’s Oil Service of Phoenix to get rid of its bad luck. The Navy underestimated the common newspaper reader’s reaction to something called “Bud’s” disposing of weaponry so lethal that we were just a truck accident away from an explosion. It is as if Bud had been called upon to dispose of America’s extra ICBM’s. In the event, Bud could not handle the job. It failed to build a “special system” to break the N. down into its components, stripping it out of its shells and returning it to the Continent of Synthetica out of which it came.

- The battle of Bud’s was the first engagement in a long process of publishing specs and waiting for bids, only to have communities rise up against N. coming anywhere near their kids. Battle Creek, Michigan  didn’t want it. Encinedo County didn’t want it. Chicago didn’t want it. Meanwhile, San Diego Congressmen Ron Packard and Randy “Duke” Cunningham, hawkish down to their drawers, were on the Navy to find a disposer. There was 3 million gallons of N., there. It was leaking out of the cannisters. The evil eye was stewing, stewing in the Southern Californian paradise.

- Finally, in 1998, a peace treaty was signed among Congressmen. Texas congressman Tom Delay agreed to shepherd the process that would bring the N. to Houston – specifically to GNI Group, a Texas hazardous-waste firm. The price had gone up from Bud’s time – Bud had bid 380,000 dollars to take it off the Navy’s hands. GNI Group charged 9 million. GNI’s group intended to take the N. and blend it  “with other industrial byproducts, creating an alternative fuel for cement kilns.”

- “Ain’t gonna study war no more”, sang Pete Seeger. “I’m going to lay down my sword and shield.” L., however, has the last word in this story: in 1916, proposing a flying aircraft, he wrote: “The flying machines now used in war are first rate in their way. For scouting purposes they serve admirably. But aircraft that can really fight are lacking.

They will soon arrive.”