tag the text, flee from the text 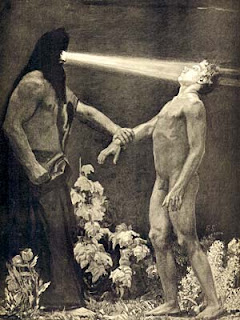 First things first. Me, my posts are all feints and fidgets, lately. If you want to read something good instead of my debauched stews - go to Rough Theory, who has been writing about the Grundrisse. As always, Marx, in her hands, begins to seem like a Henry James character - if James had only created a character with his own genius, instead of the subpar strivers from the upper class who never quite live up to the authorial voice in which they are caught. RT's Marx is a man who is hyper-aware of epistemological traps, including the trap of thinking that there are just too many epistemological traps to make broad and monumental generalizations.

More notes in and around Totem and Tabu

1. Lawrence Goldman and Michael Emmison, in a 1995 article on Huli children’s games (the Huli live in New Guinea), lament the paucity of cross cultural studies of children’s games and play. In a brief survey of the field, they find Brian Sutton-Smith’s work, outside of the American-European context, to be too developmentalist. Sutton-Smith, in the seventies, did make some cross-cultural studies of children’s play, but imposed upon these cultures a certain story of upward development – like numerous anthropologists of the sixties, and like Freud – in which a society, as it became more “complex”, showed more complex play patterns among its children. Sutton-Smith was sensitive to the fact that, under the peasant or nomadic order, children were workers in a sense in which they were not in the developed economy. But he was also very attracted to the scale, that totem among comparative ethnographers of the Cold War period. As Goldman and Smith put it, cross cultural studies seem inevitably to quote some archetypal studies of children at play, like LeVine and LeVine’s study of a Gusii community in Kenya, as support for the “low or non-existent status of representational play” in many cultures.

Yet, I find in Totem and Tabu, which I have been reading this week, a double movement – on the one hand, the construction of the story of “mankind” since the “first feast of mankind” – that feast in which the sons eat the dead father; on the other hand, the creation of certain concepts, notably ambivalence, projection, and the “omnipotence of thought”, which operate to create a series of counter-correspondences, counter-generalities that put the neurotic at the center of the modern. Our representative neurotic. And that, applied to the ‘scientific’ world view, question its latent layer of narcissism, its own “omnipotence of thought.”

3. I’ve been using Sutton-Smith’s notion of children’s play to shake up our notion of this thing and what it is about. At least Sutton-Smith is coherent – if civilization is the development of more complex forms of life, captured how you will (by modes of production, by levels of science, by some notion of technology), then surely the same process will apply to children.

4. And I’ve been using my own memory of my dreamlife. For I do remember my five year old dreams. I do remember the monsters in those dreams. I do remember the strategies – the hiding in closets and peeping out. The hiding under the bed. The hiding behind a tree. And the need I had, in order to get rid of the monster, to wake up. I had to wake up and decide to kill the monster, and then go back to sleep and do it – although often I didn’t have to. Merely waking up and making that decision allowed me to return to a monsterless sleep. But the difference in modes – dreaming/waking – corresponds to another of Sutton-Smith’s findings: the general inability of children, before the age of 9 or so, to play games of “complex” perspective-taking – that is, games in which defense and attack are mixed. Instead, the attackers correspond absolutely to one side, and the defenders correspond exactly to another. It is always the tagger, and never the tagged.

5. There’s a rich layer of this in farce. Think of Chérubin in Beaumarchais’ The Marriage of Figaro. He is always hiding. And by hiding, we know – through a dream logic – that the Count is a monster. But, in farce, the level of a five year old’s thinking (and Cherubin’s androgyny is certainly on the sexual level of the child’s idea of sex) is imposed upon by adult thinking – society’s opinions, which come in the form of a monster. Thus, the Count is continually finding him.

6. It is crucial to Freud’s vision of the first feast of humanity that, in some ways, it is a defeat. Not only do the brothers feel guilty about killing and eating a father that they love, as well as hate, but none of them occupy the father’s place. That place is, as it were, forever banned. It is the ultimate monster place.

7. I must begin with projection. Next post, I will write about projection.

Anonymous said…
LI, I'd like to hear more about what you call a "double movement" in Totem and Taboo. I also have a question. In the concepts you mention - ambivalence, projection, omnipotence of thought - that create a series of counter generalities in the text, must one not also include the "concept" of "identification"? The question of identification is, after all, one Freud's insistent preoccupations in Totem and Taboo - and in many other texts. And doesn't the question of projection involve that of identification?

Roger Gathmann said…
My last sentence in my comment is obscure. What I mean is that a thing can serve as a substitute only if the original that it is a substitute for has been the object of a process of identification. Which gets us to the well known paradox that the original is defined as such only by a process that erodes its status as the original - rather than being the original by revelation, by the glorious force of its immediacy, it is the original as a result of the process of identification. This is the paradox, if you like, of the shifter - you know how much I love shifters! The shifter, by which the speaker establishes an original relationship with language, only functions if someone else can use the shifter to establish an original relationship to language. Similarly, the original relationship to Mom, Dad, all are established by way of shifters. In the first case, the rules of substitution are purely linguistic - in the second case, they are social.
6:51 PM

Which makes identification a rather strange scene or stage. And how to exit it for the normal, stable, social world, when per Freud the process of identification is indeed intrinsic to the social?