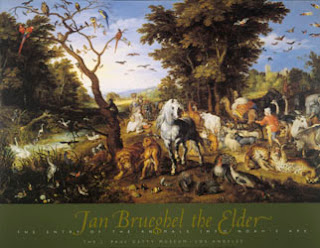 The Werepoet has posted the conservopedia entry on kangaroos, which brought a tear to my eye – for in the end, if I am for anything, I am for surrealistic science. Apparently, the conservopedia operates like a huge vacuum, scouring the web for the most ridiculous information that it can find and putting it in presentable form, suitable for LGF commentors and the like. I am so into this!

So this post is dedicated to the latest scientific investigation of Noah’s ark. Science has always found Noah’s ark a puzzle. On the one hand, God’s word says Noah built an ark and assembled all the animals, two by two – so we have some firm facts to go on. But how did Noah feed the animals, and keep them from eating each other?

The answer may come from “S.A., crypto-suspended animation in inverterbrates by Dr. Axel Kroeger and Dr. Nicalaus Swiboda in the Acta Oto-Biblica Vol. 10, issue 4 (2006), the premier journal of Bible based natural science out of Uppsala, Poland. Kroeger and Swiboda reproduced ark-like conditions by sealing off the Olympic sized swimming pool at the Holiness Temple College (where they both work in the endosynchrology department) and building a beaverwood structure to float on the pool. The two captured insects, perhaps the most difficult animal Noah and his family had to deal with. Using a simple to construct dry ice machine, using lumber from Mount Arak’s famous balsa trees and a simple combination of ice, sulphur, copper, tooth enamel, dew and fire, Drs. Kroeger and Swiboda demonstrated conclusively that the insects could be put into a state of suspended animation for up to two weeks. This, incidentally, made them much easier to stack. These results have been confirmed by scientists at M.I.T., Harvard and Oxford.

Please, readers, pass this around. LI wants to add a little something to the Conservopedia. One tiny step for an idiot, but a giant leap for the idiocy of all mankind!

Arkady said…
Roger, these are very special consumers. I won't see them ill treated. They pay top dollar for some of my more unusual stock, the descriptions of which make the very fabric of the internets blush guiltily. There are not many people who eagerly pursue their operant conditioning as a matter of moral virtue, and fewer still who can turn morality into something that's nearly as obscene -- and quite frankly disgusting, in some cases -- as the stock I carry. They've worked hard to be what they are. So please don't scare them.
7:40 AM

Anonymous said…
Your theory is fascinating but I still subscribe to the theory that Noah did not bring any food for the animals nor prevent them from eating each other. That's how the dinosaurs, unicorns, woolly mammoths and dragons became extinct - they were eaten by the tapirs, coatis and kangaroos.
4:21 PM

Roger Gathmann said…
Marius, this is actually more proof for the Kroeger and Swiboda thesis. You see, a tyrannisaurus rex was a fearsome beast. It is estimated that ten men equipped with ten elephant guns shooting a bullet a minute would take ... well, a heckova long time to put one of those babies down!

Unfortunately for our T.Rex friend, the suspended animation worked better on him than on our old friend, the army ant and various other myrmidons. Sometimes they would be roused - especially by one of those 400 foot waves that slopped over the ark. And nothing is hungrier than a sleepy ant! So they would chomp away at whatever looked good, thus reducing the sleeping t. rex to a skeleton. Mr. Noah of course was extemely angry when he found out, but what could he do - to feed the four million kinds in the ark, he and his family had to put in 20 hour days. No wonder that, when he put into port, he tied one on!

Some have objected that two army ants eating a 5000 ton t. rex would have to ear 12 pounds of flesh per minute to finish the creature off in the 40 day period. But, as Kroeger and Swiboda have helpfully pointed out, those critics are going to hell.
8:09 PM

Rod said…
Satisfying as the "going to Hell" conclusion may be, it is of little avail in converting the militantly heathen. Fortunately, I am making promising strides in my experiment to accurately recreate the antediluvial habitat of the army ant, which I believe contained "spiritual earths" (this is a term of art which it would be time-consuming to explicate) that accelerated their metabolisms to the level of tiny dinosaur Cuisinarts. My neighbor is graciously donating several hogs to the project (although in the actual antediluvium they would of course have fed on the remains of deceased nephilim).
8:20 AM

LumpenProf said…
I am doing my part to help spread these glad tidings of great joy: http://lumpenprofessoriat.blogspot.com/2007/04/noahs-suspended-animation.html
3:25 PM

Anonymous said…
Mr. LP
Thanks! I think we are all contributing to that day when some homeschooled, sullen boy dyes his hair jet black, packs his secret marilyn manson cds, runs away from home and starts the next exciting chapter of deathmetal.
- roger
5:46 PM

Anonymous said…
"Some have objected that two army ants eating a 5000 ton t. rex would have to ear 12 pounds of flesh per minute to finish the creature off in the 40 day period."

Those objectioners are either ignorant or being wilfully obtuse - there exist 18 different genera of army ants and Noah would, of course, have had a pair of each on board. Thus, each would have only had to consume a mere two thirds of a pound of dinosaur flesh a minute.

Roger Gathmann said…
These responses are heartening! Who says bible based natural science is a dead end! I believe even now scientists from the Holy Temple College are working on a stunning disproof of the global warming thesis by showing that it conflicts with Revelations - which should satisfy any patriotic American.
12:41 AM