personalism and the left: Morales and the coup 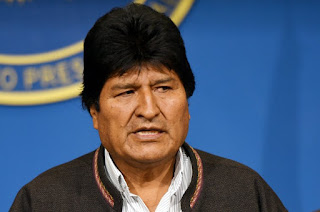 If we look at the Left from the the perspective of a 120 years, one anomaly really stands out: the curious case of personalism.

I’ve been thinking of the “cult of personality”since Evo Morales fled Bolivia. Of course, what the right is doing in Bolivia is a coup. There’s no doubt that the right has long sought to make Morales, a democratically elected president, into a ‘dictator” figure, something that is then pawned off on a compliant press in the U.S. and Europe.

What was “dictatorial” was Morales attempt to more justly distribute economic gains. Bolivia, unlike other primary products countries, has had a remarkable growth trajectory over the past 14 years, since he has been in office. His record is in shining contrast with his privatizing predecessors.
However, the real mark of political success, that is, the emplacement of a party that can robustly represent the interests of the workers, is structural. Here, Morales, like so many leftist leaders (one thinks of Castro and Chavez) has miserably failed. When he went into exile in Mexico, it was a loss for the Left. However, it wasn’t a loss for the programs he had nurtured. That loss, politically, came about because his vice president, Álvaro García Linera,  also resigned. In fact, all those in Morales’ party who were in line to become president resigned, thus leaving the post to a far right Christian,  Jeanine Anez.

A question has been lost in the reports about this coup-ish transition of power: why did the officials from the Movement toward Socialism party – the MAS – resign?

My opinion is: they resigned because Morales fled. They were more loyal to Morales than to Bolivia. This is what personalism is about.

Of course, it is an old story. When Lenin came to power in 1918, there was already abundant evidences of a cult. Lenin himself was an adroit politician, and surely thought of the cult as a tactic for imposing Bolshevik rule on Russia. It is, though, a dangerous tactic, with a tendency to take over the program entirely. When Lenin died, there was, briefly, an interval in which the party seemed to retract from the total monopolization of the political space – but this moment quickly ended. It was a moment attached, in true personalist style, to Trotsky, who lost to Stalin. Stalin’s personality cult was modeled on Lenin’s and Trotsky’s.

The more Bolivia descends, predictably, into a chaos that brings out the army and a decade of rightwing repression, the more one should think about the costs of personalism – and resist it. Because it sacrifices real advances for the working class to romanticism and a rather skewed individualism, with the individual being the leader.