On looking at Mont Blanc from our window 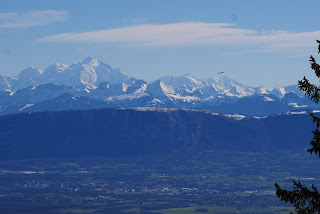 “… Mont Blanc was before us- the Alps, with their innumerable glaciers on high all around, closing in the complicated windngs of the single vale- forests inexpressibly beautiful but majestic in their beauty- intermingled beech and pine, and oak, overshadowed our road, or receded, whilse lawns of such verdure as I have never seen before occupied these openings, and gradually became darker in their recesses. Mont Blanc was before us, but it was covered with a cloud…”

Thus, Mary Shelley describing her trip with Percy through the French alps in 1816. We are in Divonne, a small town not far from where the Shelley party ended up staying in “Monsieur Dejean’s Hotel d’Angleterre in the fashionable suburb of Secheron” – to quote Richard Holmes invaluable biography of Percy Shelley, The Pursuit (I can’t think of any better way to approach Shelley than through his biography – no poet was less impersonal. The whole point was to cast off those Anglican shackles). That is about a 95 euro taxi cab ride away from us. However, like Shelley, we can see the “white fang” of Mont Blanc from our window, when the clouds are willing.

Given the occasion, I thought it would be a good chance to read aloud some of the Ode to Mont Blanc to Adam, thus boring him with a little literary education. One forgets that Shelley is the real thing. In larger poems – like the Prometheus drama – he becomes, to my taste, too much. But too much implies that there is some muchness to make an excess of, and that muchness is certainly in the Ode.

“I look on high; Has some unknown omnipotence unfurl'd

The veil of life and death? or do I lie

In dream, and does the mightier world of sleep

Spread far around and inaccessibly

Shelley, whose disbelief in God was meant as a sort of defiance of God – not a comfortable atheism, or the reactionary atheism of the “new atheists”, but a revolutionary atheism – was always flirting with a kind of panpsychism. Panpsychism is a not very avowed belief system. It is where William James ended up, in a sense meeting his father: Swedenborgianism with Swedenborg. The negative route to panpsychism is through the destruction of the idea of consciousness. Once this has been exposed, the mainstream path is a sort of gross materialism, which promises to reduce consciousnessness or thought of any kind to a material substrate. The panpsychic’s conclusion, though, is that matter, in its bad marriage to consciousness, is also destroyed when consciousness is destroyed. In its place is a monad that is reducible neither to consciousness nor to thinghood. The “mightier world of sleep” is, then, not a metaphor but a real description of the “universe of things” with which Shelley begins the Ode:

The everlasting universe of things

Flows through the mind, and rolls its rapid waves…

Mont Blanc would seem to be the least wavy of things, the least reminiscent of the Lucretian flow, though located in a landscape of flow and erosion. Holmes, though, quotes Shelley’s letter to Peacock, which shows Shelley’s eye for the endless slowness of the Lucretian drift: ‘One would think that Mont Blanc, like the god of the Stoics, was a vast animal, and the frozen blood forever circulated through his stony veins.’ Of course, Lucretius was no Stoic – nor was Shelley. But the imagery is important – it is through imagery that Shelley thought. This is not a kind of thinking to be despised: apparently, this is how Richard Feynman thought, putting himself in the position of a sub-atomic particle. Feynman, in his Nobel Lecture, expressed the discomfort felt by all his generation of physicists about the correspondence between mathematics and phenomena, the “universe of things”: “The fact that electrodynamics can be written in so many ways – the differential equations of Maxwell, various minimum principles with fields, minimum principles without fields, all different kinds of ways, was something I knew, but I have never understood. It always seems odd to me that the fundamental laws of physics, when discovered, can appear in so many different forms that are not apparently identical at first, but, with a little mathematical fiddling you can show the relationship. An example of that is the Schrödinger equation and the Heisenberg formulation of quantum mechanics. I don’t know why this is – it remains a mystery, but it was something I learned from experience.” Shelley’s romanticism was not opposed to science, but effused with the scientific glimmerings of the time – not as programmatically as Goethe, but in the same vein – and it still remains as a plausible attitude.

Shelley’s Ode is all the more today’s news as the landscape around Mont Blanc impressed itself upon him as one giant catastrophe. In the face of that long catastrophe, where was the relatively fragile human hope? What was the point of emancipation if we are going to end up on a dead planet, dead among the dead? Our ancestors and posterity, our sense of a human kinship, a clan that transcends time, is the strong point of religion. It is in fact the way I think and fear – think n fear – when I read about climate change and observe the vast political inertia and the quickening change that I might not live to see, but that I will be connected to by my infinite links to my species and to, well, the Holocene Earth. It is interesting to think through the texts of this time in the Shelley family – Frankenstein, on the one hand, and a number of Shelley’s greatest poems, on the other.

The headline graf in the NYT reads: “After days of rain and flooding made worse by climate change, firefighters and soldiers began clearing debris and unclogging roads. Electricity and telephone services remained inaccessible in parts of Germany.”

In counterpoint, this is Shelley:

… the rocks, drawn down

From yon remotest waste, have overthrown

The limits of the dead and living world,

Never to be reclaim'd. The dwelling-place

Of insects, beasts, and birds, becomes its spoil;

Their food and their retreat for ever gone,

So much of life and joy is lost.

But I refuse, irrationally, to think that this is our fate in this century. We will rise up.