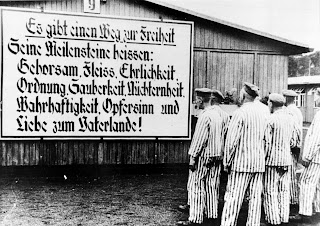 One of the oublis of the Nazi state was the accelerated construction of a slave economy – the so called “forced laborers” – Zwangsarbeiter.  There are various estimates of the number of forced laborers – by 1944 there were thirty thousand labor camps and over 8 million forced laborers. The extent of the slave system and the speed with which it was set up to intersect with every industry and service in Germany was astonishing. By 1941, 1.5 million Poles were slaves; 1 million French war prisoners were slaves. 2.5 million Soviets, by 1944. 50 percent of the Poles and Soviets were women.

The full awareness that this is what a slave state does – that what the Nazis did in 3 years were what the French, Portugese, Spanish and English did to West Africa for 300 years – seems to have been erased, or at least largely left aside, from the general discussion of slavery. There is a rhetoric among white nationalists in various countries that occasionally discovers white slavery, such as was enormously present in the Mediterranean slave markets of the early modern period; but the claim of ancestral victimage is really just a rhetorical ploy. The real enslavement of one’s grandfather/mother is not claimed, because, I think, the shame of it has a long effect.  The enormous generational shame of, for instance, the French slaves in Germany. The use of slaves everywhere, from the horrors of Peenemünde to the IG factories, is a difficult collective matter to comprehend.  Slavery operates not only as brute force, but a massive campaign to interiorize shame, to create, through beatings and yelling and the regime of humiliation, the untermenschen soul.

In the history books, the forced labor of prisoners is not generally described as slavery. There are many gradations between regimes of forced labor; prisoners of war in the twentieth century, and prisoners in general, are often made to work. The Soviet gulag was a grotesque monstrosity of forced labor. In the case of the Nazi regime, the “prisoners” were not given sentences – the idea that they could one day become, again, free laborers was not even considered by the Nazi legal system. To have a sentence, even a death sentence, is to be recognized by the state. The Nazi regime created a vast system of non-recognition – of social death. Forced laborers were once resistors, or were of the wrong ethnic type – gypsies, Jews, Slavs – and they were captured, herded together packed up and sent, by train or oxcart, to concentration camps, from thence being farmed out to tasks that brought no reward. More than that, ill treatment was often the larger point – forced laborers were marked for death at some point. Although Himmler apparently assured the other Nazi leaders that these subhumans would not be mixed with or seen by the German population, this soon became an impossibility. They went to places like the Heinkel Airworks in Oranienberg, where the population of forced laborers swelled to such an extent that they could no longer be housed impromptu in the cellars of the factory complex, and a camp had to be  built, since they needed at least the laborers to survive at least temporarily; or to Dora, in the underground, where the excavation of the tunnels went on in conditions that were freezing, dustfilled, dark, and low, a true hell into which a force of starved and beaten inmates selected from Buchenwald and tending, statistically, to be French, was jammed.  It was common, in Dora, for the slaves to be assaulted when they went into offices of the German functionaries there, who relaxed from their stressful days by stabbing them with scissors or pencils or beating them with broomhandles, whatever came handiest. Memos were written cautioning functionaries not to do this, since it increased the mortality rate, which thinned out the herd of slaves and impeded the pace of construction.

At some point, we will have to think of the KZ world – a world that overlapped with the extermination camps – and the world of the Gulags and the prison colonies that popped up all over beginning in the late 19th century as elements of the same general phenomenon. Emancipation, to my mind, is the model of what is positive about the Enlightenment – and the way the Enlightenment was financed, directly or indirectly, by slave labor is what made the Enlightenment a shaky ideological phenomenon. But emancipation does not happen all at once, in a decisive lightning stroke. It is revocable, incomplete, and easy to attack. Slavery is always just below the surface of even our contemporary politics. It is not far from us at all.