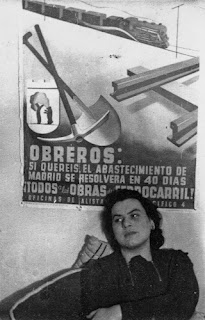 Muriel Rukeyser responded to the American jitters in a poetry collection published in 1938,  US1. The book is most famous for the “documentary’ poems known as the “Book of the Dead.” Like other artists at that time – I am thinking of Dorothea Lange’s pictures of Great depression miseries, or James Agee’s Let us now praise famous men - Muriel Ruykeyser saw in the Depression not only a great rebuke to capitalism, but, as well, to the modernist focus on a certain sort of subject – infinitely cultivated, infinitely melancholy – and sought to bring modernist shock tactics into the field, so to speak.

Modernist shock was out there in the tools and industry. The book of the dead is based on a typical bit of All American skunkery: a company, Dennis and Rinehart, hired miners in West Virginia to drill a tunnel under a mountain to divert a river to an electric plant. Discovering that there was a mass of silicate heavy rock under the mountain, the company – wanting to exploit the silica – had the men dry drill that rock in particular, instead of using water hydraulic drills, which were the legal standard. Dry drilling creates dust clouds of silicate, and silicate is inimical to human lung tissue.  A thousand or so died of silicosis, a peculiarly horrible condition that strangles you.

“-What was their salary?

Unfortunately the miners’ families, instead of being grateful that the U.S. wasn’t run by Stalin, actually stooped to lobbying to have the company investigated. Congress eventually investigated, and did nothing. The workers sued, and the courts decided a workers’ life is maybe worth a generous thousand dollars. Stalin, however, never ruled America, it should be pointed out. And Rukeyser, due to her “communist sympathies”, was duly attacked in the fifties, with the American Legion sponsoring a campaign in 1958 to get her fired as a “red influence” from Sarah Lawrence University.

The book of the dead poems are about an industrial accident. It is interesting to look across the divides – between, say, the aesthetic and the medical – and notice that industry in America, for the greater part of the century, was designed by white men trained in a certain way, among certain institutions – military, educational, corporate - while much of the countervailing work – the work of understanding the hazards of industry – fell to women who were often outsiders in those institutions. Muriel Rukeyser wrote a review of an autobiography by one of those women – the unjustly forgotten Alice Hamilton. In the obituary of Hamilton published in the NYT, it was noted that she and her two sisters were brilliant, each in their own field. Indeed, her sister Edith Hamilton is probably better known than Alice today – millions of American students got their knowledge of Greek mythology from her book on the subject. Rukeyser, in a famous early poem, rejected “Sappho” for “Sacco” – although that early gesture was not definitive of all her work. Still, I like to think that Rukeyser, the Hamilton sisters, and Rachel Carson form a mini-tradition of American dissent that truly did rage against the machine. Alice Hamilton was the first woman, I believe, to teach at Harvard; she was a pioneer of industrial medicine, and she was unafraid to campaign politically for workplace safety; she wrote to her friend,  Gerard Swope, the president of GE, about the dangers of asphalt as early as the 1940s; and of course she was investigated as a Red by the FBI.

Rukeyser’s on the road poems, unlike Kerouac later on, did not take the road as a natural given, but as a created thing, sprung from industrial design, equipment, materials and human body tissue. In her review of Alice Hamilton’s autobiography, Rukeyser expressed an aesthetic/political credo that I like a lot: that the work place is a “testing-place of democracy.” And Rukeyser saw, as Alice Hamilton did, the explicit gender terms under which the human product was turned out in the  treadmill of production:

“It seemed natural and right that a woman should put the care of the producing workman ahead of the value of the thing he was producing; in a man it would have been thought sentimentality or radicalism,” writes Dr. Hamilton. The manager of a big plant said to her that a man would see in his own workmen only a part, and a bothersome part of the plant’s machinery; but a woman would see them as individuals, as so many fathers and husbands and brothers.”  Of course, this grossly ignores the women who worked in the factories, from seamstress to the pecan shellers of San Antonio, whose strike in 1938 was a precipitating event in Texas’s history of anti-labor union law. However, the gendering of a view of the human as a “part” is an important, and missing element in the history of the American century that is falling to pieces right in front of our nose. It deserves some more sweeping treatment.