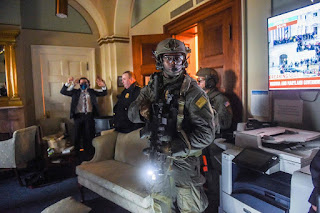 “The story is, that Leontius, the son of Aglaion, coming up one day from the Piraeus, under the north wall on the outside, observed some dead bodies lying on the ground at the place of execution. He felt a desire to see them, and also a dread and abhorrence of them; for a time he struggled and covered his eyes, but at length the desire got the better of him; and forcing them open, he ran up to the dead bodies, saying, Look, ye wretches, take your fill of the fair sight.”
Hatewatching was not invented in the clickbait age – as Socrates’ story in The Republic proves. A sensationalist culture has, however, radically increased its reach ever since the newspapers discovered that pics of a lovenest and a corpse – if it bleeds, it ledes – could be a wicked mealticket. Now if it bleeds, it is killed endlessly in zombie movies, action movies, and so on, John Wick without end, amen. Any observer downloading American popular entertainment could predict, I think, that the culture that made it would host beaucoup mass shootings, just as this observer would predict, looking at the impossibly skinny models and pornucopia of ads for burgers, beer and sweets, that the culture would host both obesity and anorexia, locked in struggle. Sensationalism is about dizziness – loosing balance. And so the eyes take over, the appetite is hijacked, and ... we do our bourgeois best to navigate the breaks.
This is an exculpatory opening for my confession: since the Capitol riots, I have been binge hatewatching. The videos, the videos, as endless as the peeps searching to kill journalists, libtards and various and sundry and livestreaming on their handy cells for their friends.
In the aftermath, I’m all on the vigilante, the snitch side. I’m with the sedition hunters, the capitol riot trackers, the people who have slowed down the vids to bring into focus face after face, clue after clue, and turn their guesses into the FBI. I have gone into the circuit of watchers of the proud boys, those who’ve hacked their messaging, their pathetic Parler pics. The announcement that Ethan Nordean was arrested, today, as one of the ringleaders of the riot was no surprise to me- I’ve read the hacked messages about Nordean doing lines in the Capitol.
However, unlike Leontius, I have read me some social theory, so I justify my hatewatching with a quasi-academic purpose – to understand political/criminal groupings. I’ve been writing about 1930s extreme right groups in France, lately, and I am gobsmacked by the continuities. Now is the time for some good publisher to fork over the bucks for my translation of the diary of “Dagore” – a mook who was part of the extreme right Cagoulard group that murdered several people in the attempt to overthrow the Popular Front government – because the similarity of thinking between these groups is amazing, down to sexual attitudes and the anti-semitism.
There was a nineteenth century tradition, on the left, that “politicals” would be separated from the rest of the criminal population in the various prisons in which they ended up; one of the themes of Solzhenitsyn’s Gulag is the breakdown of this noble tradition, a mark of the evil of Stalinism. I’m wondering, myself, whether that separation was ever as ontological as all that. I look at the vids the Proud Boys took of themselves and I don’t think of terrorists – I think of gangs. Specifically, prison gangs. Not enough has been made of the political creativity of jail. The Sunni paramilitaries in Iraq, which eventually formed Daech, started out with a jailbird – and probably more than one jailbird. Jail, which is harshly racially and sexually segregated, is the factory that has produced the avant garde of today’s American petit bourgeoisie. This is a fact I refused to believe all during the Trump regnum – rectum regnum. And it has mostly been avoided by the “resistance”, which much prefers the story that mini Russkies crawled through the facebook cracks and corrupted our neighbors. Conspiracy against conspiracy in this lightweight championship round, which deflects from the deep culture of despair in which our minds are being liquidated.
at February 04, 2021