False flags - the 2020 strategy of tension 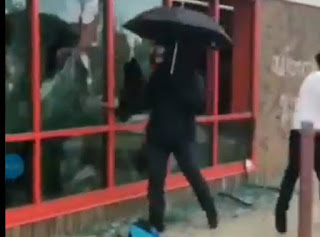 I'm sorta interested in the false flagging, by rightwing groups, of leftwing groups. It has been a common thread in rightwing extremism since at least the 1930s, and flowered into the strategy of tension in Italy in the 1970s. The explosion that destroyed the Bologna railroad station and killed 85 people in 1980 was plotted by extreme righwing groups with the intent that the government and media would blame the left. There has been a long struggle in Italy to hold the neo-fascist perpetrators responsible. In the U.S., the strategy of tension has fallen into the hands of clueless militia members and the like. However, aided by high officials in the Trump administration and rightwing cops, this will eventually work some pissant masterpiece of a massacre here. Starting with the famous "umbrella man" who tried to provoke a looting riot during the protests in Minnesota this summer - who turned out to be connected to a white supremicist group, as was suspected by protesters at the time - to the Boogaloo bois who killed two cops in Oakland with the intent of throwing blame on the protesters to the man who firebombed a police station in Minnesota who, in contact with the Oakland killers, was trying to throw the blame on the BLM - a mini strategy of tension has been going on, favored by conservative media. The intersection between rightwing media and these groups is essential.
The strategy of tension rarely works to achieve the intended coup. In the 30s, the C.S.A.R., a right wing French group, tried to pull this off to overthrow the Popular Front government and failed. However, many of the members of this group got a fantasy chance to do their business once the Nazis occupied France. The people who supervised the blowing up of the synagogues of Paris were ex C.S.A.R. members. After the war, they were given light punishments, and went on to important places in French society - one of them, Mitterand's boyhood friend, Jacques Correze, eventually became the CEO of L'oreal, which was for a while your perfume company to meet all your anti-semitic needs - so heavily did their employee force depend on former collaborators.
That the Washington Times has printed that there were no antifa people among the Capitol incursion group is a real blow for the time being. But the lie that it was really antifa is being shaped right now, and will eventually come out of Donald Trump's mouth.
at January 11, 2021