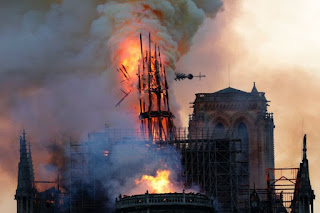 This plague winter, I walk out into the streets of Paris under the semi-permanent concrete of clouds, my mask in place, my glasses steaming up from my warm breath, and I distinctly feel, under my feet, something slippery, something creaking. There’s something precarious, something about the sidewalks, the spotty traffic, the masked pedestrians that have a slightly demoralized look. The closed up windows of the restaurants, the yawning awnings of the cafes, all the sidewalk tables gone, the measured influx of customers in the shops that are open, shops sporting, as jauntily as they can, the marks of the Christmas season – reminiscent not so much of the usual commercial bacchanal as of a retirement home stirring up the ashes of nostalgia. Something. Paris reminds me right now of some scarred old dreadnought heading out into cold and enemy infested seas. This is all my illusion, but illusion with a respectable geneology – for one of the staples of modernity is the image of Paris in ruins, another capital city undone: Ninevah, Jerusalem, Rome. There’s a fine line in French literature, going back to the some of the minor writers of the Enlightenment, like Mercier and Volney, who dreamed this dream. Giovanni Macchia, the great Italian scholar, wrote a book about it, Paris en ruines, which, in the French translation, was prefaced by Italo Calvino – a connoisseur of cities, visible and invisible, and an inveterate refugee in Paris. Calvino’s essay is very much part of its time – I believe the late eighties – casting its eye over the changes wrought in Paris by the great commandatore of the seventies, Pompidou and Giscard d’Estaing, symbolized by the Beaubourg, on the one hand, and the destruction of Les Halles, on the other. Speaking of the radical writers who subjected Paris to their scrutiny, like Zola, Calvino unleashed this fine parenthetical remark: “and it is not by chance, we can add, for even in May 1968 the barricades were given birth like an evocation of the topography of the old districts, the same as for the revolutions of 1830 and 1848, which confirms how much the mythological and archaeological  element is inseparable from the idea of revolution.”

The barricades haven’t risen up this year, in response to the Macron government’s massive incompetence. We have, recently, had cars burned, and policemen doing their usual job of beating random innocents. The revolt of the base level of the French population, the gilets jaunes, has been put on hold. Even when it was going at full throttle in 2019, there was not much barricade action, just a little graffiti, broken glass and some bits chiseled off the Arc de Triomphe, truly horrifying the bien-pensants: is this the way we treat the cash cows of tourism?

If we were superstitious, or sensitive readers of signs, like the medievals, we would have been more alarmed by 2019’s omens. Not just the post-modern jacquerie – for didn’t the cathedral itself, Notre Dame, burn? What was this a sign of? It seems, now, so utterly appropriate. You can walk across the Pont Saint Louis and get a hinder glance of the old thing, all its charred flying buttresses and exposed gargoyles – the passer-by’s instinctive gaze upward is greeted by what any sensible person up until 1700 would see as an indictment of the social order.

Ah, there it is again: the creaking.

Sometimes, I wake up at 3 or 4 in the morning. And I swear I hear something.

If you haven't yet read it, may I recommend Bruno Jasieński's utopian bioterrorist I BURN PARIS? https://www.twistedspoon.com/I-Burn-Paris.html