ORWELL AND THE 1619 PROJECT

The disputes about the 1619 project, which claims that the American republic from the beginning was about slavery and the suppression of Black humanity, has been whirling off and on in the background lately. Tom Cotton, the Arkansas senator who proclaimed that slavery was a “necessary evil”, has proposed a law defunding the teaching of the 1619 project – which is all, of course, in the name of canceling evil cancel culture – a sort of absurd ending to the absurdities of the moral panic among the unfireable portion of the commentariat. Sean Wilentz, a strong Clintonite and liberal, was dismayed to be yoked into Tom Cotton’s crusade, and has spent some time distinguishing his brand of history – which sees the constitution as a marvelous instrument that cleverly avoided the topic of slavery and was thus objectively anti-slavery –from Cotton’s.

For those interested in the older, liberal American historiography, where the faith is that America has from the beginning been a nation tending towards progressive moral values, it is interesting to see the mishmash the old school Americanists have to make of the obvious, the moves to avoid what stares you in the face: the U.S. was originally a nation with millions of slaves, owned by millions of whites, with Northern states adopting an anti-slave and pro-segregationist position regarding African-Americans. I’d recommend a thread by Nicholas Guyatt, who gave Wilenz such a hard time in his review of No Property in Man in the New York Review of Books. https://twitter.com/NicholasGuyatt/status/1291724388174385152  In the thread, Guyatt connects Madison’s conviction that slavery was wrong (in spite of the fact that Madison was a slaveowner) with Madison’s conviction that black Americans had to be shipped back to Africa – the latter being Madison’s condition for “emancipation”.

All of this is part of a larger emergence from the Cold War myth of the “free world”. The dawn of democracy in America didn’t happen until the 1960s, with the fall of Jim Crow restrictions on black voting and political participation. In France, it wasn’t until the 1940s that women could vote, and there was no voting rights for citizens of French colonies. Similarly, the UK was an empire that basically ruled India as it wanted to until 1947, Kenya until 1956, etc.

Orwell, in from one of his less quoted essays, Not Counting N***, written in 1939, made the same point. Orwell takes on the idea that the alliances shaping up are between “democracies” and the fascists. He is ostensibly reviewing a book by a Mr. Streit, advocating a union of the Western Democracies: 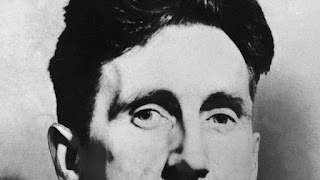 “Mr Streit himself is not a hypocrite, but his vision is limited. Look

again at his list of sheep and goats. No need to boggle at the goats

(Germany, Italy and Japan), they are goats right enough, and bilhes

at that. But look at the sheep ! Perhaps the USA will pass inspection

if one does not look too closely. But what about France ? What about

England ? What about even Belgium and Holland ? Like everyone of

his school of thought, Mr Streit has coolly lumped the huge British

and French empires—in essence nothing but mechanisms for exploiting

Orwell had a blind spot about America, which he often confused with the country in Mark Twain’s Tom Sawyer. He knew and sometimes gestured at the apartheid, but he never really had a clear vision of how central it was to the United States – a vision on par with his clear-sighted view of the meaning and function of the colonies. Until a couple of years ago, Orwell’s view that the Democracies were props for a race-based oligarchy would not have found any space in the New York Times. Now, with the 1619 project, it has: with significant upset to the heirs of the Cold War anti-communist coalition.

These larger forces are what connect the diverse, rather manic responses of the Never-Trump crowd, the 90s liberalism crowd, and the anti-cancel culture crowd. It is one thing to call the Iraq invasion a mistake, but to doubt that the United States is a nation animated by a moral call – rather than just a nation – really seems, to these people, a plunge into relativism and nihilism.

Email ThisBlogThis!Share to TwitterShare to FacebookShare to Pinterest
Labels: Orwell