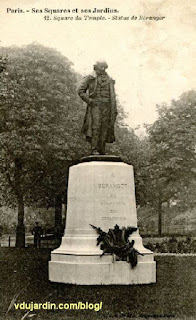 “A girdle of orange, Puritan-pumpkin colored girders
braces the tingling Statehouse,
shaking over the excavations, as it faces Colonel Shaw
and his bell-cheeked Negro infantry
on St. Gaudens' shaking Civil War relief,
propped by a plank splint against the garage's earthquake.”
Thus, Robert Lowell in For the Union Dead, a poem which centers a monument. Among the army of statuary that occupies America’s cities and parks, this is one of the rare statues that is signed by an actual famous artist: Augustus Saint Gaudens. In the later nineteenth century, he was the most famous American sculptor. It was Gaudens as well who made the famous tomb to poor Clover Adams, Henry Adams’ wife, in the Rock Creek Cemetery in D.C.

In the most recent overthrow of a buncha statues of unworthies, one argument is oddly missing: that these things are valuable art pieces. Not a peep is uttered about their artistic worth – it is all a question of history. It is unlikely that anybody knows the names of the sculptors who created their equestrian visions of Robert E. Lee or Stonewall Jackson which gallop across Richmond Virginia or Stone Mountain, Georgia. These sculptures were by contract and design of an extreme banality. There was no Greek nonsense – nobody even thought about showing, say, Stonewall’s dick, a la Greek Olympic sculpture.
Evidently, these statues are ways of monumentalizing a race hierarchy – or racism. But I want to poke along in another, related direction and ask about their social existence as objects.
One thing is certain: when you have a mass social phenomenon, you have a system. The question is: what is this system about? If we have read our Barthes, the first thing we want to know is: how substitutable are they one with the other, this banal troop?

If I substituted, say, a statue of Ulysses Grant for Robert E. Lee in Richmond (under cover of night, and carefully keeping the sign that read Robert E. Lee) would anybody notice?
I would imagine the answer is yes. But the substitution would have respected the system’s rules, and helped us think through the limits of substitution – limits within the statuary universe. Here, I would tentatively claim, we get to the totemic limits defining these things in the urban space. For surely these sculptures are rooted in the white culture’s fetishes.
There is a school of cultural studies that has been here. Inspired by such figures as Louis Marin (notice how my reference here itself erects a statue, a fetish, how I am caught within the system I critique), historians have long been fascinated by public “objects”, from stamps and coins to statues. In Paris, which is a city of statuary, I am surrounded by a violent history sedimented in statues and bas-relief whereever I turn – and I love it. I love it as a walker. Statues are simply another set of blurs to the car driver, but to the walker they are presences. Unsurprisingly, historians have picked through the statuary history of Paris for clues to the meaning of these totems. Here’s a nice paragraph from Victoria Thompson’s essay, The Creation, Destruction and Recreation of Henri IV Seeing Popular Sovereignty in the Statue of a King

"At the moment of their creation, public monuments are typically designed to reflect and communicate a single meaning. In reality, they often reflect competing values. This is perhaps most evident in efforts to commemorate some of the major events of the late twentieth century—the Holocaust, the Vietnam War and the fall of the Soviet bloc. The intense conflict generated by these attempts has allowed scholars to better under-stand how difficult it is to establish a stable and unifying meaning of an event using a public monument.4 In societies where diverse constituen-cies have a voice, debates over public commemoration reveal how various groups imagine their community and its history.5 And even in societies where the state determines what to commemorate and assigns monuments an official meaning, that meaning is subject to contestation by populations who vandalize, make fun of, or otherwise subvert the official meaning of a structure constantly in public view.6 The destruction of a public monument can similarly elicit diverse reactions, and the traces of its memory can exert an influence over communities long after it has disappeared.”

Thompson’s essay is concerned, in part, with the politics of revolution and reaction – revolution knocked down the statues of kings and saints, and reaction re-erected them. I live within a couple of blocks from the statue of Henri IV (an assassinated King) and a couple of blocks, as well, from the Parc du Temple, which is a third Republic park, a park designed under Napoleon III but really instituted by the Republic that came after Napoleon III’s overthrow. As a sign of the Republican ideal, a statue of Pierre Jean Béranger was erected, by popular subscription, in the park. Béranger lounges, now, in the limbo of forgotten celebrities – in his life, he was famous as a people’s poet, a maker of extremely popular songs with a democratic bent. His statue had a political meaning that was strong enough to incite a symbolic gesture when Paris was occupied by the Nazis – the statue was taken down and melted (it was made of bronze). That bronze then was recast for a statue in honor of the Nazi victories by Arno Breker, Speer and Hitler’s favorite artist. That monument, in turn, was destroyed by the Red Army.

That the fetish is fated to destruction is one of the unconscious principles of modernism. The alternation between the invention of universals and the destruction of people is the fort/da of the bit of history I have experienced, that little chunk of time, 20th/21st century.

Incidentally – two years ago, when I was in Berlin, I went to Treptower Park. There is an astonishing collection of statues there, built by the Soviets, to commemorate World War II. It is as impressive as, say, the statue of Liberty. Those statues are bronze. I wonder if Beranger’s statue, which was melted down to become part of Breker’s statue, which was melted down by the Red Army, didn’t end up there. The metempsychosis of statues – a subject for some Kleistian tale. 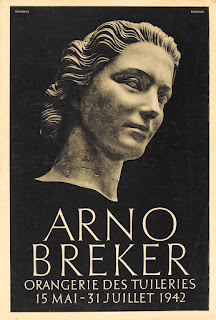