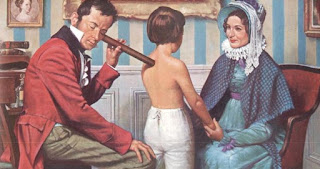 In his book, Bad Medicine, David Wootton makes an interesting remark about the symbolism of the stethoscope. It was invented in 1816 by René Laennec out of a problem in gender politics: the norm for female patients of the all male doctor fraternity was to be examined with their clothes on. Thus, the doctor could not lay his head against the chest of the patient and listen to the sound of what was going on inside. Laennec was concerned with phthisis, a nosological category that has now been subsumed as tuberculosis. The stethoscope was a true advance: doctors became much better at diagnosing phthisis. But therein lies the historical burden of Wootton’s book:
“Phthisis no longer exists as a disease: we now call it tuberculosis because we think of it as an infectious
disease caused by a specific micro-organism. The same sounds in a stethoscope that would once have led to a diagnosis of phthisis now leads to tests to confirm tuberculosis. But there is an important difference between our diagnosis of tuberculosis and Laennec’s diagnosis of phthisis: we can cure tuberculosis (most of the time), while his patients died of phthisis––he died of it himself. Until 1865 (when
Lister introduced antiseptic surgery) virtually all medical progress was of this sort. It enabled doctors to get better and better at prognosis, at predicting who would die, but it made no difference at all to
therapeutics. It was a progress in science but not in technology.”
The gap between the ability to diagnose and the ability to cure, or even to understand the cause of a disease, or its etiology, is easy to forget. I often edit articles about medicine, or public health, in the pre-twentieth century period. Some of these articles concern the medical culture of native peoples. And even with the best anti-colonialist will in the world, often the authors simply assume that there is a contrast between a rational and curative Western medicine and a ritualistic and non-curative folk medicine. In fact, folk medicine was medicine up into the twentieth century, and often continues to be today.
The older regime of treating a disease for which there was no certain cure has been much studied, and, contrary to all the bullshit about building up "herd immunity" (by letting the herd be culled of its weak members) was highly successful by stopping infection. To take tuberculosis, one of the great scourges of the 19th century, as an example - a classical example - we assume that this scourge was defeated by streptomycin, one of the miracle drugs of the 50s. But as was pointed out long ago by Rene Dubos, who was a major player with the Rockefeller foundation in finding a cure for tuberculosis, the decline in the mortality from tuberculosis long preceded the cure. Dubos was a pioneer of the ecological school of medical history - recognizing the vast importance of infrastructural factors in the recent surge in the health and wellbeing of human beings. Tuberculosis, in the nineteenth century in the U.S., was responsible for a fourth of all deaths. By 1940 it had plummeted to a 20th of all deaths. A large share of the increase in longevity in the 20th century was due to the decline of tuberculosis. Some doctors estimated that a third of the deaths of the middle age cohort in Europe in the 19th century were tuberculosis related.
If the same anti-virtue ethos was in place in the nineteenth century, instead of public money being spent on sewage systems, the government would have encouraged each individual to dispose of his or her sewage - although the "progressive" 19th century version of the neoliberal would have encouraged safety through a tax break of some kind. The late twentieth and early 21st century witnessed a shocking dectline in the public health structures of most of the "advanced" Western economies. And this is what we get.
at May 13, 2020