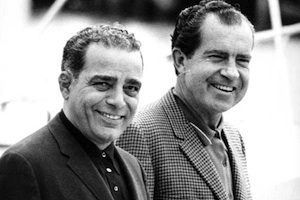 As the Watergate scandal started to kick into high gear in the spring of 1973, the Village Voice published a story about Nixon on the run with his friend, Bebe Rebozo, in Miami during a vacation. They spent almost two days at Grand Key island, which was owned by Nixon friend Robert Alplanalp, the inventor of the aerosol valve – every time you spray something from a bottle, you can thank Nixon’s buddy.
The VV story by Craig Karpel speculated that “he is said … to have built some sort of orgone box on Grand Key, an accumulator which gathers the particularly rich geomagnetic energy of the zone which abuts the Gulf Stream and focuses it, like a laser beam, on him. It was word of the power of this concentrated geomagnetic flux, transmitted by the Lucayan and Arawak aboriginal inhabitants of the islands to those of Cuba, which reached Don Juan Ponce de Leon in garbled form as bruit of a “River Jordan”, immersion in which conferred eternal youth.”
Ah, the early seventies, when Hunter Thompson was considered a bit on the drag side for a journalist. Another Village Voice article about Watergate meditated on the spiritual reality of that name, viz the waters of life being locked up from the people, and the key to unlocking the gate promising to drown us all in Aquarius.
I’ve been thinking about Watergate and its drama in contrast with Trump and his reality show. Trump really does share certain personality traits with Nixon – certainly the overmastering ressentiment – but doesn’t have the dark glamour. There was something in Nixon’s depths, while Trump’s dad had his depths surgically removed when Trump was seven, along with the tonsils. Yet it is much easier to think of Trump spending time in an orgone box. He is definitely using the White House as an accumulator of rich geomagnetic energy, although since Trump is ever the materialist, he wants to see that energy monetized and he wants it now.
I was around 15 when Watergate became TV. I was brought up in a conservative Republican household and considered myself a very conservative little chirp, so much so that Nixon’s trip to China made me think he was a bad man – China was communist! I hadn’t yet shucked all of that bullshit, although by the end of my teen years I was a Marxist – so there you go. I was helped on the way, though, by Watergate. The President (back then, it was in Capitals that I thought of the mook) had so obviously and painfully lied, lied, lied – and I swallowed the press narrative that this was the worst crime a President could commit.
Later, however, I began to see that there was, to say the least, some disproportionality here. The lie that the president told that resulted in the secret bombing of Cambodia and the horrific spread of the war was skipped over nimbly by the press. The lean towards Pakistan that encouraged a genocidal civil war in which a million were killed in Bangladesh was also as nothing. It was the coverup of the break-in to the Dem headquarters (and not, say, the eternal spying and placing of agents provocateurs with the Socialist Workers Party, which, as Noam Chomsky pointed out back then, was simply considered normal and unscandalous by the press) that undid him. Undid him for months and months of wonderful worldtheater.
History, like all cold cases, depends a lot on trivia. As I grew into your average paranoid loser leftist, I began to get this. I also began to get that conspiracy theory might not be true, but it was a great vehicle for spotlighting the weirdness of ordinary life among the American elite – and even among the American lumpen. Whether Oswald was or was not a lone assassin is one thing – but the very social possibility that was inhabited by his friend, the hairless David Ferrie, was a more important other, at least as far as the American circus was concerned. The Watergate scandal was absolutely full of kooks and eccentrics and wheeler dealers. As well, it ultimately made no sense. 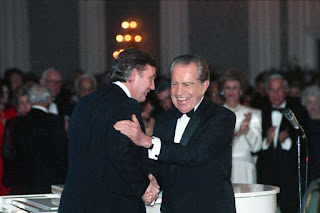 Just as, really, Trump shaking down Ukraine for info makes no sense. I mean, he really needs facts, suddenly, to jam up Biden with his vile son? Has Trump ever needed facts to do anything? Just make shit up. I thought that was the motto.
Nixon, who came to prominence as a conspiracy theory politician – getting Alger Hiss with papers improbably hidden in a pumpkin patch, and going on against the great Communist conspiracy for years and years – was himself a natural conspirator. Trump is too, but unlike Nixon, he isn’t a very good one.
What he is best at – what made him president – was firing people on a reality show. The psychopathologically cruel boss – his core group loves this. Because they want all the black people and the uppity bitches fired. The moment of firing gives them goosebumps. The American psyche can be divided neatly into two halves – the one half that longs to fire, and the other half that longs to quit. Nixon sprang from a more complex and deeper psychosis. He was an American Manichee. He might not have called upon our better angels, but his career was definitely in converse with the spirits, whether orgonally charged or not.
Trump on the other hand is just the kind of dismal loser/boss that the fire groupies love. His impeachment is turning out to be much simpler, but also, alas, much less fun.
at October 18, 2019