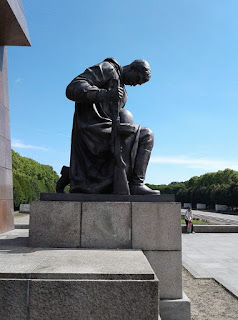 We went to the Soviet war memorial at Treptow Park expecting Soviet kitsch. It turned out to be a curiously moving site. The memorial is most noted for a giant statue depicting a soldier with a sword, holding a baby, or being held by a baby, which surmounts a smaller stone space, a sort of hypertrophied hut.  The soldier faces (at a field’s distance) two pinkish red marble walls, which are separated by a space. There is a series of steles depicting various scenes of war and peace that make their way on the edge of the field between the wall and the giant statue.
None of this seemed in bad taste, or in some non-synchronicity with the event commemorated – the massive war between the Soviets and Nazi Germany that ended in the ruins of Berlin in 1945, when the German army finally surrendered.
In the 90s, it was considered in bad taste to prefer the Soviets to the Nazis. The moral equivalency argument, which had started on the far right in Germany, triumphed after the wall fell.
Of course, that is utter bullshit.
I’ve been reading Anthony Beevor’s account of the final push and the “battle of Berlin” since I’ve been here. Beevor’s account is famous for finally putting into the scales the massive number of rapes committed by the Soviet troops. This was a moral advance in historiography: military history has almost completely avoided the subject of rape, even though rape has been weaponized in all wars.
However, along with the moral enlightenment comes a certain puzzling moral blindness. While fully willing to lay the blame for the rapes on the Soviets, Beevor doesn’t spend much time pondering the terror bombing of the German cities, and in particular, Berlin. In the moral calculus, the Nazis and the Soviets get very bad marks, while the allies fall back into that comfortable category of military history, the advance of a number of divisions. In fact, though, those Allies were advancing through civilian casualties of at least 600,000; they were advancing through the deliberate destruction of cities, and their residences, which were all openly part of the Allied war plan, much more so than the Soviet quasi-approval of rape.
I myself have no doubt that the right side won in WWII. Whether it should have been fought at all is a question that goes back to WWI – the truly unnecessary war. If Vladimir Lenin had been the head of Russia in 1914 rather than Czar Nicholas, or if the governments had listened to the socialists, led by Jaures, and its radical wing, led by Trotsky and Lenin, WWI would never have happened – which would have meant that WWII never would have happened. Instead, the momentum of the 1900s and 1910s, which was with the Left, was broken, never to be fully recovered again.
Beevor, I should make clear, feels that the campaign of rape is morally important without feeling, therefore, that the Soviets and the Nazis were morally equivalent – which I take to be, logically, the idea that it would not have made a moral difference if the Nazis had won.
Of course, the argument that the radical right made in the 70s in Germany, which you can now see casually sprayed across the New York Review of Books, as if it were obvious, was the argument of America First in 1939/1940. A group with which, I believe, Trump’s father was involved. But the same bien-pensant liberals who find Trump shameful have gone along with finding Trump historically justified. Such is the price of keeping in place a neo-liberal order that has to justify itself with larger and larger historical revisions. Otherwise, one has to question how we came to a place where the top ten percent own more than the bottom seventy percent, and how the top 1 percent own more than the next nine percent, and so on. Put it on a graph and label it: world-historical fuckup.
But I digress. The Soviet memorial is a quiet place, much quieter than the argument I am making above. There is something to be said for the aesthetic continuity of muscularity between the fascists and the communists. In the U.S., we confine the bulging muscles to the comic book and to action movies. But the monumentality, the bowed heads, the sense of human waste and exhaustion – this is what the memorial, in its entirety, conveys well. I expected something triumphal. What I found was something elegiac.

One of the more memorable spots in Berlin.