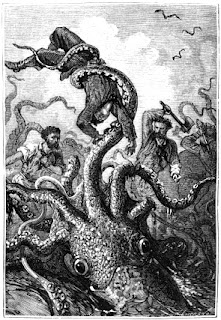 The consequence of the non-positivist line is that we work outward from what the discipline said about itself at time x, and what was assumed about it at time x, instead of working inward from an exterior view about what we know, now, at time y, about the supposed contents of the science. The advantage of the first view is that we can catch in our net many, many connections that have been pruned away as the dominant episteme changed. And we become more aware that the conceptual oppositions that are assumed in positivism are products of a teleology rather than of an immersive reading of the sources.
Take, for instance, materialism.
It is often assumed that a great leap forward in the sciences occurred in the 17th and 18th century as a materialist program was organized to delimit and define acceptable explanations of natural phenomena. In opposition, there was a supernatural program that looked around to transcend the mere causal schema.

In fact, this view of the materialist program is very much a product of late nineteenth century positivism. The oppositions, in the eighteenth century, was much mushier than this. One of the problems that thinkers – the zemstvo, the intellectuals in the field, the doctors, lawyers, notaries, teachers, as well as writers – faced was that they grew up in a world of certain beliefs that seemed not to be absolutely unfounded. Their grandparents believed that certain people could, through sacrifice to the devil, transform themselves into beasts – and their parents definitely believed that certain people had the gift of finding water or treasure using a kind of cleft stick. They knew their parents, and some of them knew their grandparents, and they weren’t insane. They weren’t even stupid. So what was going on?

Materialism, far from opposing these beliefs, helped to explain them. Of course, certain superstitions were rejected – the belief in werewolves for instance or vampires required a very complex explanation, and usually the thought was: this is the delusion of ignorant peasants. But certain superstitions, properly understood, revealed a primitive grasp of material connections. Just as the sun’s gravity – that invisible force – explained the rotation of planets around it, so, too, astrology, properly considered, was all about cosmic forces that were material things, and could be discovered empirically.

Or, to put a point on this: the demystification of superstition did not lead to the rejection of those things we might think of as “superstition”, but rather their re-enactment in other terms.