on belief and practice 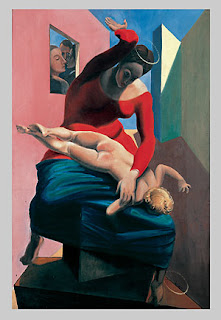 In the History of Oracles, Fontenelle – with his native deadpan delivery, a style that had more in common with Defoe than with the salon - describes Cicero’s criticism of the theory of sacrifice propounded by some of the stoic philosophers: that in the moment of sacrifice, the oracular portion – the heart, the liver, etc. – was changed by the god, depending on the sanctity of the sacrificer, or the favor a particular priest had with the gods. Of course, this passage contains a muffled echo of Fontenelle’s own times – it is the choked laugh that makes for the deadest of deadpan styles. Fontenelle indirectly acknowledges the obvious parallel between the stoic theory and the theory of the transmutation of the host only by making a point about Cicero’s ability to get away with criticizing the terms of sacrifice without being regarded ‘with horror’ by the people. “There is reason to believe that, among the pagans, religion was only a practice, to which speculation was indifferent. Act like the others, and believe what you wish. This is a very extravagant principle, but the people, who did not recognize its impertinence, were happy with it, and the gens d’esprit submitted to it easily, because it barely restrained them.”

Oh the deadpan regard that marks the witticism. Fontenelle, France’s most ardent propagandist of the new science, was aware – was more aware than perhaps he wanted to be, as Nietzsche later astutely understood – that the spirit of enterprise and science for which he stood was slowly but surely diverging from the croyance in the tenets of religion. The instant of their separation had suddenly become a speck, a distinct speck, a very distant point, on the horizon.

Yet, more than a polemical irony can be extracted from under the impenetrable mask. Fontenelle is making a real historical point, in line with his ambition to read history as the philosopher would read the results of an experiment. When a social fact presents itself that does not elicit the social reaction that the presence of such a social fact would cause in the historian’s own society, one can trace a certain lack – as Sherlock Holmes would put it, the significant fact is that the dog did not bark. And that lack of an expected fact must, itself, be subject to the same causal inquisition – the non-lieu is an effect in its own right.

Of course, the presupposition here – the White Mythology – is that the historian’s own society is, as it were, full – it is the most ‘advanced’ society. It would be easy, though, to turn around the historian’s assumption and ask about the lacks in that advanced society.

The lack of a certain collective passion, then, one that led, in Christian Europe, to the burning of Bruno, allows us to retrospectively suppose a certain tolerance. The indifference of the people that he condemns might, actually, be something he works towards.

But such is the dead weight of the masked language that this has to remain speculation.

Still, it is easy to assimilate Fontenelle’s remark to the coming program of the Enlightenment without really looking at its paradoxical nature. Surely, the idea that a collective practice does not reflect a collective belief is a startling anthropological speculation. It might have been devised precisely to counter, or at least question, the passage about divination in Vico’s New Science.

From Fontenelle again: “Thus we can see that the entire pagan religion only asked for ceremonies, and no sentiments of the heart. The gods are irritated, all of their lightning bolts are about to fall: how will we appease them? Do we need to repent of the crimes that we have committed? Is it necessary to return to the paths of natural justice, which ought to be among all men? Not at all: we need only to take a calf of such and such a color, born in such a such a season, cut its throat with a knife, and this will disarm the gods. And still you are permitted to mock the sacrifice inside yourself, if you wish. It won’t make anything worse. Apparently, it was the same with the oracles; let he who wished to believe do so; but one does not give up consulting them. The custom had such force on people that it had no need to be supported by reason.” [Chapter 7, my translations]
at September 18, 2010

QWERTY 9160 = THE THIRTY-SECOND SPIRIT IS ASMODAY, OR ASMODAI. HE IS A GREAT KING, STRONG, AND POWERFUL. HE APPEARETH WITH THREE HEADS, WHEREOF THE FIRST IS LIKE A BULL, THE SECOND LIKE A MAN, AND THE THIRD LIKE A RAM; HE HATH ALSO THE TAIL OF A SERPENT, AND FROM HIS MOUTH ISSUE FLAMES OF FIRE. HIS FEET ARE WEBBED LIKE THOSE OF A GOOSE. HE SITTETH UPON AN INFERNAL DRAGON, AND BEARETH IN HIS HAND A LANCE WITH A BANNER. HE IS FIRST AND CHOICEST UNDER THE POWER OF AMAYMON, HE GOETH BEFORE ALL OTHER. WHEN THE EXORCIST HATH A MIND TO CALL HIM, LET IT BE ABROAD, AND LET HIM STAND ON HIS FEET ALL THE TIME OF ACTION, WITH HIS CAP OR HEADDRESS OFF; FOR IF IT BE ON, AMAYMON WILL DECEIVE HIM AND CALL ALL HIS ACTIONS TO BE BEWRAYED. BUT AS SOON AS THE EXORCIST SEETH ASMODAY IN THE SHAPE AFORESAID, HE SHALL CALL HIM BY HIS NAME, SAYING: "ART THOU ASMODAY?" AND HE WILL NOT DENY IT, AND BY-AND-BY HE WILL BOW DOWN UNTO THE GROUND. HE GIVETH THE RING OF VIRTUES; HE TEACHETH THE ARTS OF ARITHMETIC, ASTRONOMY, GEOMETRY, AND ALL HANDICRAFTS ABSOLUTELY. HE GIVETH TRUE AND FULL ANSWERS UNTO THY DEMANDS. HE MAKETH ONE INVINCIBLE. HE SHOWETH THE PLACE WHERE TREASURES LIE, AND GUARDETH IT. HE, AMONGST THE LEGIONS OF AMAYMON GOVERNETH 72 LEGIONS OF SPIRITS INFERIOR. HIS SEAL IS THIS WHICH THOU MUST WEAR AS A LAMEN UPON THY BREAST, ETC = WE HAVE NOW COME TO THE LAST YEARS OF THE EIGHTH CENTURY. THE EASTERN EMPIRE, DELIVERED FROM COPRONYMUS AND HIS SON LEO IV., BREATHED AGAIN UNDER THE REIGN OF CONSTANTINE AND IRENE. CHARLEMAGNE REIGNED IN FRANCE, ADRIAN I. WAS BISHOP OF ROME; TARASIUS, A GREAT AND SAINTLY PATRIARCH, RULED AT CONSTANTINOPLE. BEFORE CONSENTING TO HIS ELECTION TARASIUS ADDRESSED TO THE COURT AND PEOPLE OF CONSTANTINOPLE A DISCOURSE FROM WHICH WE QUOTE THE FOLLOWING PASSAGE: "THIS IS WHAT I PRINCIPALLY FEAR, (IN ACCEPTING THE EPISCOPATE:) I SEE THE CHURCH DIVIDED IN THE EAST; WE HAVE DIFFERENT LANGUAGES AMONG US, AND MANY AGREE WITH THE WEST, WHICH ANATHEMATIZES US DAILY. SEPARATION (ANATHEMA) IS A TERRIBLE THING; IT DRIVES FROM THE KINGDOM OF HEAVEN AND LEADS TO OUTER DARKNESS. NOTHING IS MORE PLEASANT TO GOD THAN UNION, WHICH MAKES US ONE CATHOLIC CHURCH, AS WE CONFESS IN THE CREED. I THEREFORE ASK YOU, BRETHREN, THAT WHICH I BELIEVE IS ALSO YOUR WILL, SINCE YOU HAVE THE FEAR OF GOD: I ASK THAT THE EMPEROR AND EMPRESS ASSEMBLE AN CUMENICAL COUNCIL, IN ORDER THAT WE MAY MAKE BUT ONE BODY UNDER A SINGLE CHIEF, WHO IS JESUS CHRIST. IF THE EMPEROR AND EMPRESS GRANT ME THIS REQUEST, I SUBMIT TO THEIR ORDERS AND YOUR VOTES; IF NOT, I CANNOT CONSENT. GIVE ME, BRETHREN, WHAT ANSWER YOU WILL".

QWERTY 469 = IT IS THE CHOKED LAUGH THAT MAKES FOR THE DEADEST OF DEADPAN STYLES = FOUR SPIRITS: ARSENIC - AMMONIUM CHLORIDE - SULPHUR - MERCURY = INNER RESOURCES AND CAPACITIES REQUIRED FOR ACTUALIZATION (PHASE 15 - The Waxing BiQuintile).

North, I've been missing your cyber-webs! Penelope at the loom, weaving and re-weaving.

the thing i love about you roger is i can dump shit on you. cry on your shirt, as it were.

give me a couple hours and check your email.

QWERTY 2215 = WE HAVE NOW COME TO THE LAST YEARS OF THE EIGHTH CENTURY. THE EASTERN EMPIRE, DELIVERED FROM COPRONYMUS AND HIS SON LEO IV., BREATHED AGAIN UNDER THE REIGN OF CONSTANTINE AND IRENE. CHARLEMAGNE REIGNED IN FRANCE, ADRIAN I. WAS BISHOP OF ROME; TARASIUS, A GREAT AND SAINTLY PATRIARCH, RULED AT CONSTANTINOPLE = FONTENELLE INDIRECTLY ACKNOWLEDGES THE OBVIOUS PARALLEL BETWEEN THE STOIC THEORY AND THE THEORY OF THE TRANSMUTATION OF THE HOST ONLY BY MAKING A POINT ABOUT CICERO'S ABILITY TO GET AWAY WITH CRITICIZING THE TERMS OF SACRIFICE WITHOUT BEING REGARDED 'WITH HORROR' BY THE PEOPLE = VINGE'S "WALL ACROSS THE FUTURE," WHAT HE AND SCIENTISTS ARE CALLING THE COMING TECHNOLOGICAL SINGULARITY. VINGE WAS THE FIRST TO USE THE MATHEMATICAL TERM "SINGULARITY" TO DESCRIBE THE POINT IN HISTORY WHERE ACCELERATING TECHNOLOGICAL PROGRESS BECOMES NEAR INFINITE AND THUS UNKNOWABLE.