an ass festival to start things off 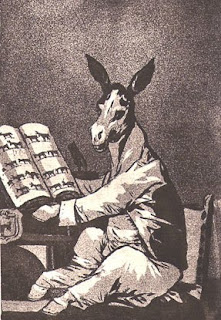 Oh – if only I had the wings of angels, which are made of gold and good for purchases in most shopping centers and stores! But I have human limbs, and flesh is worth shit, so I bend over texts and correct them. I make suggestions. I must slave and bugger my own imagination, and fall behind every 8 ball that I set up. I would like to be the blogger equivalent of Babe Ruth, pointing to the stands, waiting for the next pitch. But this is not going to happen. I am, rather, the equivalent of some Pinter vaudevillian, full of bile and tags.

Still, I am a Sagittarian, and thus stubborn as a mule – or a jackass. I do want to keep going in this thread. And jackasses are, as a matter of fact, the subject of this post.

I have already written about asinine philosophy. The thread I am aching to pursue – the growth of police forces in the nineteenth century – should start, I think, with the story of a jackass.

The year is 1793. In Lyon, the forces of counterrevolution briefly seized the city. French soldiers loyal to the Convention have brought that freshet of the ancien regime down. During the brief period of white rule, some of Lyon’s most prominent Jacobins were cut down. The Convention sends two representatives to oversee the punishment of the town – Joseph Fouché and Collot d’Herbois, who take the post together to Lyon on November 7, 1793 (17 Brumaire).

Who were these two? Although Fouché had cast his lot with the Jacobin, he was not an enragé. In Nantes, where he grew up, he was trained in theology – which meant, in 1789, that he believe in precisely nothing. His real passion was balloons – but the revolution was at the door in Nantes. As Louis Madelin notes, he first thrust himself into prominence by communicating with Brissot – who, as we observed in last week, was almost certainly, at one time in his life, a police informer. But Brissot was now, of course, a power – forming a clique, with Condercet and Paine, among others. Brissot had particularly come out against slavery:

“The president of the club of the friends of the Constitution believed he was able to felicitate Brissot in the name of the society. Great movements in the city, where the trade in blacks constituted for many of the merchant marine a lucrative commerce; where – on the other side, more than one bourgeois – including Fouché – had plantations in Saint-Domingue, or counted friends there among the colonists that emancipation ruined. Before the general emotion, Fouche didn‘t hesitate: he retracted…”

And so Fouché, with the soul of Julien Sorel, advanced in the network of the Jacobins. Collot d’Herbois was different. Fouché’s biographer is suitably scathing about this character:

"An old actor, Collot had retained that character of noisy vanity, yet earth to earth, applied to little things, capable of a sensibility ceaselessly shocked by things, those manifestations of violent sentiments, often false, but sometimes so tragic, that he ended up, like a good ham, imposing on his own self, no longer discerning in himself the true from the false and the mask from nature. For the rest, a histrion as much as a tragedian, he passed from tears to laughter, amusing himself by terrifying the Jacobins by his indignant arias and turning about and making everybody laugh with his routines in bad taste. In the end, a middling ham, thrust into too vast a scene with a role in which they left him to figure out for himself his miserable improvisations. Add to this that he drank and ate, amused himself vulgarly, always drunk, quickly becoming an alcoholic, entertaining himself, as a stylish amateur of the backscene, with gourmet meals after playing the great scenes, and mixing with the drunks from capital wines the applause of the common seats.”

The French revolution, like all true revolutions, effortlessly created myths. -Or no, not effortlessly - but the effort is hidden behind the libidinal tugging on events, as in an animated cartoon in which, from an inkwell, there emerges a potent drop, that shakes itself into a figure, who takes up a pen and draws in all the parts of himself that he needs after fining his hand. As we have been emphasizing, the zone of adventure - not defined or captured by the grid of vocations or classes - exists as the reservoir of the modern, even as the modern devotes an increasing amount of time trying to repress that zone. And so these two, like Hermes and Dionysos, came to Lyon. The secret policeman and the actor – a couple that has had such a long, long career in our very lives! Haven’t they masturbated and betrayed us until we hardly exist any more?

But I wanted to get to the jackass. The government in Paris had made a few helpful suggestions about razing Lyon to the ground – but the secret policeman was certainly not going to do that. Fouché was the first in a long line of modern secret policemen who preserve, behind a career of crime, certain scruples. Beria, according to legend, finally pulled the plug on Stalin. And what better tool to do down a tyrant than his secret agent? That is, from the point of view of Nemesis. What eventually happened, as we know, was a horror. At a certain point, they simply lined up Lyonnais, in chains, and plowed them down with cannonshot – because there were too many to exterminate via firing squad.

Fouché’s biographer insists that, at first, Fouché thought he had devised a middle way.

"Before the ceremony, prelude ordered by the ex-oratarien [Fouché], one saw the two proconsuls go through the town, followed by a group armed with axes and picks, attack.. the crosses and statues, to disinfect the churches one by one, chasing out the constituional clergy and pillaging the altars. The old cult abolished with its relics and signs, one saw it emerge once again. The bust of Chalier [a murdered Jacobin], a savior god, appeared carried on a tricolor palanquin, flanked by an urn in which, by a pious illusion, one pretended to carry his ashes. The group stumbled along surrounded by a cohort that shouted to all of terrified Lyon, down with the aristos! Up with the republic! Up with the guillotine! Patriots followed carrying urns and chalices rifled from altars, and an ass covered with a cape and crowned with a mitre. Tied to his tail was a crucifix, a bible and the gospel. The three representatives of the republic were there, Collot, Laporte and Fouché, giving an official air to this irreligious ceremony. They went through the devastated religious city, and came to the place de Terraux. There they knelt before the bust of Chalier, then they spoke. Collot, swollen and solemn, mewed out a honorable amends, of which the originality was disputable. Savior God, see at your feet the nation lying on its face, asking for your pardon for the impious assassination of the best of men…. Manes of Chalier, be venged!… Fouché wept, you are no longer here, Chalier… [Laporte] was not used to either the stage or the podium, hesitated, and then said, death to the aristos. After this debauch of eloquence, a brazier was lit, a crucifix and a gospel was burnt, and the ass drank out of the calice extended to him.”

After this, the ass festival in Zarathustra is the height of sanity.
at September 19, 2009