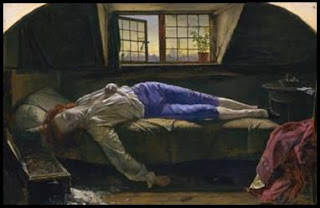 The suicide note is an enlightenment genre. Werther, before he died, burnt many of his papers, and sent others to his friend Wilhelm, who – completing the exchange of friendship – then published all the notes and letters as “The Sorrows of Young Werther”. But, of course, as a man of fashion – so fashionable, in fact, that he is concerned with that the clothes he wears into the grave represent his look – Werther was not going to lose the occasion to write a last letter. And so he writes it to his “dearest one” – Charlotte.

As I’ve pointed out, love and suicide in the Sorrows of Young Werther overlap, in a way – they both are imagined in terms of circles, and those circles in turn are the forms in which something is distributed to elements that are substitutable – variable places, in fact. However, Werther’s suicide itself is told in terms not of a circle, but of a line. Werther sends his servant to borrow the pistols from Albert, Lotte’s husband, who is in a foul mood – and we do remember that among the first things Werther says in his early letters was that he could not abide a foul mood. Albert is suffering from problems at work and from Lotte’s relationship with Werther. And of course by this point he knows that Werther is a drinker who talks about suicide a lot. So what does he do? He loans the pistols. And who gives the pistols to the servant? Albert tells Lotte to take the pistols down from where they are hanging, on the wall. So the pistols pass through Lotte’s hands. She even wipes the dust from one of them. She, too, knows that Werther has talked about suicide. And she has reproached him for drinking. But she gives the pistols to the servant without saying anything to Albert. In a sense, the scene in which Lotte gives the pistols to the servant is a scene of judgment: Werther has finally been thrown outside of the circle, into which he entered knowing that Albert existed as Lotte’s fiancé.

The suicide note left by Werther is, then, a letter from a man who has been excluded, and who is about to take that exclusion and embody it in a bullet to the head. In it, he alludes to the first night he met Lotte, and the scene in which, after the counting game broke up, the two of them watched the storm out of a window and communed with each other over some verses from Klopstock. In this, Werther’s suicide note is not of the usual type:

“I step to the window, my dearest one. And look and look through the stormy clouds flying overhead at the individual stars of eternal heaven. No, you will not fall. The eternal holds you in its heart, and me.”

Studies of the suicide note first started appearing in the nineteenth century. But the modern study of the suicide note took a giant leap forward in the twentieth century, when Edwin Schneidman found files of them in the Los Angeles police department archives in 1944. Schneidman and his associate, Farberow, published a paper on the notes in 1957, using a “control” – simulations of a suicide note. The Schneidman Farberow method even has its own acronym in suicidology – the SSN (Simulated Suicide Note).

“A simulated suicide note (SSN) is a communication written by someone who is not suicidal but who has been instructed to write a note as if they were. These notes are matched according to demographic variables and compared with genuine suicide notes. Any differences that emerge are attributed to differences in suicidality and characteristics that discriminate between these two groups are warranted in any explanation of suicide.” [Understanding Suicidal Behaviour, O’Connor, 81]

Goethe’s Sorrows of Young Werther – LJW – could be considered an SSN. Although as has been noted, literature – that social stain which seeps through everything! – has contaminated the genuine suicide note from the beginning.

Schneidman wrote that his ideas about the suicide note have changed. At first he thought that it would do for him what dreams did for Freud – provide him with the royal road to the heart of the suicide consciousness. But over the course of time, he has moderated this view. What the simulated suicide notes brought out was the length of the genuine note, the fact that the genuine note is more often dated, and that it has more factual statements in it.

Schneidman was interested in what he called “risk writing” – that is, the relationship between writing and suicidal ‘mentation’ – and wrote a study of the "suicidal logic" of the Italian writer, Cesare Pavese, who committed suicide. Schneidman quotes a remark made by Pavese about his early fascination with suicide – which he first attempted at the age of 19 – as his “syphilis.” Interestingly, he had, according to Schneidman, some very highly wrought sexual relationships with women – he often felt inadequate (oh, this language! How dick and pussy are processed through the mill!) because he was impotent, or prematurely ejaculated. Pavese noted in his diary: “A man, unless he is a eunuch, can always achieve ejaculation with any woman… and a man who ejaculates too soon had better never been born. It is a failing that makes suicide worthwhile.” (August 3, 1937) That is not a pleasant thought to carry about in one’s head – besides, of course, being entirely ludicrous. But – as Kafka intuited – the higher judgments, the judgment that condemns you to death, is ludicrous in the extreme.

Schneidman is very good about this. He quotes Von Domarus and Arieti, who wrote that the patients they dealt with – schizophrenics – often mutilated logic by shifting the deductive focus in sentences from the subject to the predicate. The subject of the premises is how we understand the workings of the standard syllogism: All men are mortal, Socrates is a man, therefore Socrates is mortal. But in schizo-logic, the focus shifts to the predicate. “An example: Certain Indians are swift; stags are swift; therefore, certain Indians are stags…. Another example. The Virgin Mary was a virgin; I am a virgin; therefore, I am the Virgin Mary.” Schneidman finds this kind of thinking showing up in Pavese’s diary. He uses the word catalogical – “because it destroys the logician” for this kind of thing.

You must confess you have thought and written many banalities in your little diary these past months. I agree but is there anything more commonplace than death? A lover’s reasoning: If I were dead, she would go on living, laughing, trying her luck. But she has thrown me over and still does all those things. Therefore, I am as dead. (February 25, 1938)

The argument embedded in this paragraph contains a blatant logical error – and gets Pavese into deep trouble. He reasons himself into hopelessness: Therefore I am as {good as) dead (and might as well be really dead). It makes as much logical sense as his saying that he is Switzerland or the Virgin Mary. One has to watch carefully how one uses the word ‘therefore’..

Pavese’s catalogical reasoning style – I call this pattern of thinking catalogical because it destroys the logician – linked suffering with death, death with suicide, and therefore the presence of suffering the (the necessity of) suicide. … From clinical experience we know that committing suicide is often reduced to the need to do something – anything – to stop the flow of unbearable mental anguish.” [Schneidman, Suicide as Psychache 124-125]

To do something – this is doing without any subject. And – by catalogical inference – suicide operates here as the essence of the dread possibility that lurks at the bottom of this infinite freedom to do something else. It is symbolic of the dark side of the world of abstract labor, a world in which all connections are inessential.
at November 18, 2008