the point outside the painting 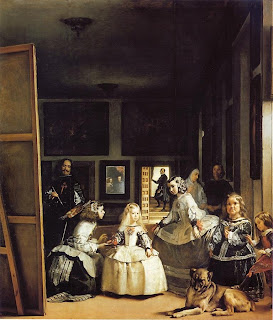 LI is like ‘poor Atabalipa’, the Inca emperor. When we open a book, we want to hear voices: hints, whispers, cries, the banjo opera, and every sigh, and every sudden silence. We want something to arise from the pages.

So, when we began this series of posts about 17th century figures, some of whom – Mothe de la Vayer, for instance – might not be today’s headliners, we went looking to one of our long time favorite books, Foucault’s Les Mots et les Choses, thinking that our theme – the failure of an ethos of volupté to move from the hypocognizable to the hypercognized – or, in plain English, the failure of a lifestyle oriented around volupté to accrue a fully ethical standing under capitalism – could settle, so to speak, within that text, find a niche there. Roberto Calasso, in The Ruins of Kasch, alludes to a marvelous word – intersigne – to refer to coincidences in the social world. Out of such coincidences, the paranoid weaves his dreams. Gravity’s Rainbow is, for instance, premised on the mad pursuit of intersigne. Well, LI originally thought that there was an intersigne between what we are doing and what Foucault did.

So far, however, this hasn’t proved to be the case.

In Les Mots et les Choses, one of Foucault’s games was to show how one could talk about “dominant ideas” within dominant forms of governance without using Marx’s notion of ideology. And, of course, Foucault’s notion of dominant ideas are ideas that explain, classify, describe – in a word, these ideas form an epistemological apparatus. In the famous preface, Foucault makes the tentative claim that the Classical era’s epistemological center is all in the play of representation. In the introduction, that long, lingering close up of Velasquez’s painting, Las Meninas, Foucault finds an objective correlate to make his point:

This center is symbolically sovereign in the anecdote, since it is occupied by King Philip IV and his wife. But principally, he is it by the triple function that he occupies in relation to the painting (tableau). In him there comes to be superposed exactly the gaze of the model in the moment in which he is painted, that of the spectator who contemplates the scene, and that of the painter at the moment he composes his tableau (not he who is represented, but he who is before us and of whom we speak). These three “looking” functions are confounded in a point exterior to the tableau – that is to say, ideal by relationship to what is represented, but perfectly real insofar as it is by way of it that representation becomes possible. And yet, this reality is projected into the interior of the tableau, projected and diffracted in three figures who correspond to the three functions of this ideal and real point. These are: to the left the painter with his palette in his hand (selfportrait of the author of the tableau); to the right the visitor, a foot on the step, ready to enter into the setting (la pièce); he takes in all the scene in reverse, but sees the front of the royal couple, which is the spectacle itself; at the center at last, the reflection of the king and the queen, decked out, immobile, in the attitude of patient models.”

Foucault has marvelously followed the arrow of sight, here, to diagram the intersection between power and knowledge – and the first stage of knowing is seeing, even though – the logic here is gone over and over again by Nagarjuna – one can’t see the seeing. But as we reduce the painting to relations between audience, painter, and the royal couple, we allow the ‘subject” here to become the total product of these gazes. Yet of course they aren’t. Foucault is evidently avoiding the attitudes implied by the Marxist formula that the dominant ideas of an epoque are the expression of the dominant class. Yet he has not emerged from the spell of that formula altogether. The paintings real structure, in terms of whose gaze counts, subtly excludes certain of the court retinue - namely, the dwarves, who take up as much facial space in this painting as anyone else. Of course, they are intruders on the royal scene – and yet they still exist within it, expressing another exteriority that isn’t counted by the gaze. The mechanism of hierarchy that is presumed here has, after all, to perform two functions, one of which is separation, and the other of which is connection - for the court could not exist for a second without its multitudinous contacts with the classes below it. These dwarves have wandered out of the enclosures that Foucault has so expertly described in Histoire de la Folie dans l’Age classique. Is it by accident that Foucault chose this painting to linger upon? Yet, the culminating point of the lesson of Las Meninas, for Foucault, brackets them. This makes me wonder if there is room in Les Mots et les Choses for the adventure and its social importance, as I am conceiving it. For, in other words, the traversing of social spaces. Surely those dwarves are intersignes: erudite and popular culture are separated by a gesture of erudite culture, and that gesture has generally been believed - but shouldn't one ask whether erudite culture can really judge itself that well? And whether its audience - which is erudite culture as well - is not just as prejudiced, or blind? In terms of emotional customs: is it true that mapping the epistemological machinery of a social space and time gives us the fundamental determinant of that space’s passional customs? Is it true that the epistemological machinery, during this era, successfully purges itself of rites de passage, substituting for it autonomous scientific methods, among which, Foucault claims, is pre-eminently, in the early modern period, the method of representation?

I think he noticed the gap between the life order of the passions and the epistemological machines himself, which is why, at the end of his life, he turned to the disciplines of the self.

But still – LI will not underestimate the possibilities that rise out of Foucault’s book.
at June 12, 2008

Ah, I should have included the name of the dwarf - Maria-Barbola.