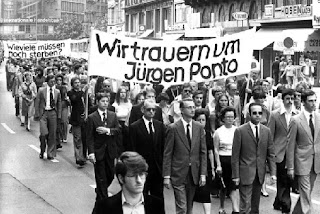 It is thirty years. Thirty years since the Deutsche Herbst – the attack by the RAF in Germany that was meant to free their imprisoned members. Spiegel, which is falling all over itself with nostalgia and comparisons to 9/11, labels it the war of “six against six million”. The fall brought the assassination of General Siegfried Bruback, an attack on the government offices in Karlsruhe, the kidnapping and execution of Hanns Martin Schleyer, the head of the German Employers Association, and the hijacking of Lufthansa Flight 181 in which the hijackers coordinated their demands with the Schleyer kidnappers. The airplane eventually landed in Mogadishu, after the hijackers had killed the pilot. The plane was stormed by a special commando force from the BDR and all of the hijackers were killed. That night, Death Night, Andreas Baader, Gudrun Ensslin and Jan-Carl Raspe supposedly committed suicide. The one survivor, Irmgard Möller, who nearly died of stab wounds she supposedly inflicted on herself with a regulation piece of cutlery – a butter knife - has always denied that they committed suicide. You can read her side of the story in this interview. The laborious inquiries set in motion by the state came to the suicide conclusion in spite of the fact that the story is, even on the face of it, preposterous. Myself, I don’t believe that Andreas Baader had a gun smuggled into prison so that he could shoot himself in the back of the head. According to the official account, they were able to communicate with each other, in spite of the prison’s attempt to stop them communicating with each other, by wired together their radios and turning them into transmitter/receivers, although they had been caught at this before, and - as Moeller points out - their cells were often searched. A lot of wire was definitely ‘found’ in their cells, enough for Gudrun to hang herself, the next morning. However, the wire and smuggled ammo stories never did become believable. Yet the press accepted it, mostly without question – since to question the story would be to admit that the State operated outside the law in crushing a Revolutionary group that claimed that the State’s laws themselves were a form of violence. 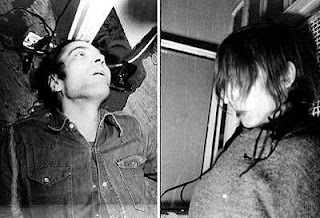 LI has written other posts on the RAF. We admit to a fascination. The RAF communiqes of the time have changed from the late sixties and early seventies. In the beginning, the RAF was communicating with a sizeable outside group of potential sympathizers. By 1977, the audience had dwindled down to two groups: the cadre and the cops. Similarly, the RAF was no longer striking to bring down the system, but merely to rescue its people. It isn’t the dull Marxist jargon that makes the communiqués so sad, but the dwindling of their scope. In 1977, remember, the Western world was going through the kind of crisis that offered a number of different possible futures. The neo-liberal path was merely one of them. Rüdiger Safranski, the biographer of Nietzsche and author of a new book defending the Romantics, points out in this interview that the RAF had a certain glamor rooted in the romantic culture :

S: How much of the great and beautiful in literature, in music has arisen out of the aetheticization of death? what would literature and art be without the glorification of violence? without the celebration of martyrs? But in politics one doesn’t want that – for good reason. There, we both want and need a system that carefully filters out these aspects.

q: The We of which you speak doesn’t include the Rüdiger Safranski of 1968. At that time Safranski propagandized the the “Dionysierung der Politik”.

S: Yes. “Imagination in power” Thus, at the end of my Romantic book I become ganz cool and say that that has never been a good idea. 68 was for me, strongly, a romantic movement, all the way up to the RAF. The described their struggle internally, in reference to Melville’s novels, as one against the white whale. This way of blending political action with literary images and thus giving political business a deeper meaning has been described by Novalis: "When I lend the common object a higher sense, the usual a secret aspect, the known the value of the unknown, the finite an infinite semblence, I romanticize it.”

I think Safranski seriously underestimates the social root that binds the artist to the politician, which was so clearly seen by Weber. Both are types which were freed, in the early modern era, from the system of patronage – it is one of those fine, archaic nuances about Goethe that he actually returned to the system of patronage, in Weimar, making himself the last kept artist, in a sense – and both unconsciously reflect that act of emancipation in everything they do. The idea that we have found an ideal political system and can now all go to sleep, in the era of Bush and the criminal war in Iraq, is one that LI rejects, of course.

I had not know about the RAF’s appropriation of Melville. So I went to an interview with Stefan Aust, which was also pointed to, last month, in Harpers by Scott Horton Horton quotes this part of the interview:

Q: In the language of the RAF [Rote Armee Faktion] the state was not just “the pigs,”[the pig system] but also Leviathan, the Great White Whale, Moby Dick. Why did the RAF members use code names taken from Moby Dick?
A: Gudrun Ensslin had this idea, in fact she thought up code names for the group members, in order to mislead those who were conducting surveillance. She took almost all the names from Herman Melville’s novel Moby Dick. The demonic, mono-maniacally crazy captain Ahab meant Baader, Starbuck was used for Holger Meins, the Carpenter for Jan-Carl Raspe, Quiqueg for Gerhard Müller, Bildad for Horst Mahler, Smutje for Ensslin herself. The whale Moby Dick, who appears in the book as a parable, a deeply coded complex of symbols, was taken yet again as a code. The whale is Leviathan, and Leviathan is a symbol for the state, a state whose papier mâché mask of deceptive appearances the RAF was committed to smashing. “For by Art is created that great Leviathan, called a Common-Wealth, or State (in latine, civitas), which is but an artificiall Man,” that’s the opening sentence of Hobbes’s Leviathan, which is quoted in Melville’s Moby Dick. This Leviathan-State, this white whale, was the object of the terrorists’ pursuit. That’s why this was an extremely appropriate parable for what the terrorists did. The figures that appear in Moby Dick correspond in fact very closely to the individual figures of the RAF. “

He didn’t translate the next part:

Q: Let’s stop for a second with Ahab as Baader.

A: Listen to this about Baader: „Nor will it all detract from him, dramatically regarded, if either by birth or through his particular circumstances he have what seems a half willful overruling morbidness at the bottom of his nature. All tragical greatness rests on a certain break in their healthy nature, of that you can be certain.” [this last sentence doesn’t accurately translate the passage in Moby Dick, by the way] So writes Gudrun Ensslin, citing Melville over Captain Ahab, to Ulrike Meinhof about Baader. Actually, this says a lot. Ensslin was actually a great psychologist. She was on the trace of the fact that Baader’s struggle against the state bore features of a metaphysical end struggle, similar to that which ruled Ahab against the Whale.
…
“I would even strike the sun itself if it offended me,” says Ahab about himself. And further on. “How can the prisoner be free, if he hasn’t broken through the wall? For me this white whale is the wall, close before my face. Behind it, I often think, there is nothing.” You cannot better formulate the transcendental self-styling of the RAF.

You will even find this when you look behind the other code names. As I said, Starbuck, the chief mate, was Holgar Meins. About Starbuck Melville writes in Moby Dick: Sie werden das auch finden, wenn Sie hinter die anderen Decknamen schauen. Wie gesagt, Starbuck, der Erste Steuermann, war Holger Meins. Über Starbuck heißt es in „Moby Dick“: „Starbuck’s body and Starbuck’s coerced will were Ahab’s so long as Ahab kept his magnet at Starbuck’s brain; still he knew that the chief mate, in his soul, abhorred the captain’s quest, and could he, would joyfully disintegrate himself from it.“ Yes, this was exactly what it was like between Holger Meins and Baader.”

For the standard view of the deaths of Baader, Ensslin and Raspe, you can read this LBR article, focused mainly on Gerhard Richter’s paintings. You will notice that the state's version of those deaths and the smuggled in guns is accepted without a whimper, or even noting that the one survivor disagrees absolutely with the account.

Surely some of this stirred Delillo to make one of the characters in Falling Man an art dealing sympathizer with the RAF.
at September 20, 2007

"It is thirty years."

Some mistake, surely? The RAF hasn't carried out an attack in Germany since VE Day. In fact, the rest of the article doesn't seem to be about the RAF at all but about the Red Army Faction, which cannot be rendered as an acronym because the acronym is already taken.

Ah, Mr. Lawrence, if you look at the Spiegel link, you will see that Spiegel uses RAF as the acronym for the Red army faction. That generally seems to be the case in Germany. Now, who am I to butt heads with a media monolith?

He is a German, of whom little better can be expected. He is entitled to abuse his own language and conceal the very large part the real RAF played in its history, but we should not condone it by repeating the solecism any more than we should allow the Dutch in their irredentism to misaproppriate the term "the Netherlands" (which includes present day Belgium) and apply it where we have the long established usage "Holland".

Basically, he should not be so up himself as to seek to impose his own narrative, nor should you fall for it.