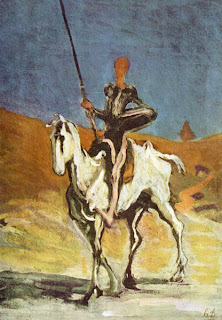 Usually, histories of the radical enlightenment wind through the philosophers and the natural scientists. May LI suggest another path? A primal scene of resistance, no less – which, like all primal scenes, begins with the opening of the eye – although in this primal scene, there are only shadowy proxies for Daddy fucking Mommy. It begins like this:

“Don Quixote raised his eyes and saw coming along the road he was following some dozen men on foot strung together by the neck, like beads, on a great iron chain, and all with manacles on their hands. With them there came also two men on horseback and two on foot; those on horseback with wheel-lock muskets, those on foot with javelins and swords, and as soon as Sancho saw them he said:

"That is a chain of galley slaves, on the way to the galleys by force of the king's orders."

"How by force?" asked Don Quixote; "is it possible that the king uses force against anyone?"

"I do not say that," answered Sancho, "but that these are people condemned for their crimes to serve by force in the king's galleys."

"In fact," replied Don Quixote, "however it may be, these people are going where they are taking them by force, and not of their own will."

"Then if so," said Don Quixote, "here is a case for the exercise of my office, to put down force and to succour and help the wretched."

This is from Chapter 22 of the first book of Don Quixote. It is a key chapter, for it provides the motor that ties together the first book. By freeing the prisoners, Don Quixote and Sancho Panza become, themselves, outlaws. This provides the loose plot into which Cervantes can fit his episodes – a blessed structure, that shows up, in variations, throughout the succeeding centuries of the European novel.

Blockhead!" said Don Quixote at this, "it is no business or concern of knights-errant to inquire whether any persons in affliction, in chains, or oppressed that they may meet on the high roads go that way and suffer as they do because of their faults or because of their misfortunes. It only concerns them to aid them as persons in need of help, having regard to their sufferings and not to their rascalities. I encountered a chaplet or string of miserable and unfortunate people, and did for them what my sense of duty demands of me, and as for the rest be that as it may; and whoever takes objection to it, saving the sacred dignity of the senor licentiate and his honoured person, I say he knows little about chivalry and lies like a whoreson villain, and this I will give him to know to the fullest extent with my sword…" – Chapter 30

The relationship between the intellectual and power has always fascinated intellectuals, who like to think that they are the repositories of true power – the poets will always trump the legislators in that long run where we are not, contra Keynes, all dead – some of us live on in books. But the line of philosophes, sages and, I’ll admit, buffoons who represent LI’s notion of the intellectual elect spring out of that twenty second chapter of Don Quixote.

It is much to my purpose, here, that the whole of Don Quixote can be read as a comically misshapen imitatio. Indeed, Don Quixote is just at the right age – middle age – to have his head so addled by romances that the traditionally strong urging of the middle aged heart in the pre-capitalist world takes its shape not through a meditation on the savior, but through a meditation on the knight redeemer.

Cervantes does not present his knight as a completely deluded man in this chapter. In fact, he raises the moral risks by having Quixote talk to the prisoners. Each confesses to his crime, and one of the criminals is “the famous Gines de Pasamonte, otherwise called Ginesillo de Parapilla,” whose feats have apparently entered into common lore. Unlike the headlong charge against the windmills, here there is no case of hallucination, even if there are comic verbal confusions. At the end of learning that one man is a thief, another a pimp, another a committer of incest, Don Quixote still tells the chief guard to let the men go free – and when he refuses, Don Quixote attacks. Later, in chapter 29, a curate, who has been told of the action by Sancho Panza, will supply the liberal voice of conscience that tells us of the consequences of our knightly acts. Of course, the consequences, as described by the curate, are entirely fictitious:

"I will answer that briefly," replied the curate; "you must know then, Senor Don Quixote, that Master Nicholas, our friend and barber, and I were going to Seville to receive some money that a relative of mine who went to the Indies many years ago had sent me, and not such a small sum but that it was over sixty thousand pieces of eight, full weight, which is something; and passing by this place yesterday we were attacked by four footpads, who stripped us even to our beards, and them they stripped off so that the barber found it necessary to put on a false one, and even this young man here"—pointing to Cardenio—"they completely transformed. But the best of it is, the story goes in the neighbourhood that those who attacked us belong to a number of galley slaves who, they say, were set free almost on the very same spot by a man of such valour that, in spite of the commissary and of the guards, he released the whole of them; and beyond all doubt he must have been out of his senses, or he must be as great a scoundrel as they, or some man without heart or conscience to let the wolf loose among the sheep, the fox among the hens, the fly among the honey. He has defrauded justice, and opposed his king and lawful master, for he opposed his just commands; he has, I say, robbed the galleys of their feet, stirred up the Holy Brotherhood which for many years past has been quiet, and, lastly, has done a deed by which his soul may be lost without any gain to his body."

According to Roberto Gonzalez Echeveria’s Love and the Law in Cervantes, the 1560s saw a typical modern response to a military and economic crisis: the state swelled the numbers of prisoners, who could then be used on galley ships. To do this meant expanding the number of offenses and expanding the role of the police, such as they were, much as such things have been done for twenty years in the U.S. The crimes, of course, are all individual, and fill, link by link, the prison factory space, while the larger crime – a system of criminal law that constitutes itself a crime – is committed by nobody. Don Quixote, charging against the proxy person of the king in attacking those raffish guards on the open road, makes himself a criminal, and turns Sancho Panza into his accomplice. Yet according to his own standards, he remains evermore the loyal knight to a king whose real traits are supplanted by romantic ones.

Without the outlaw knight, the radical enlightenment would be a legalism. With it, it becomes a rich drama of false starts and causes. A true outlaw knight ventures even outside that law which the intelligentsia now imposes on itself – the law of the smart. The law of the test. The law of the grades. The insane chain gangs of meritocracy. It is colder outside, and you might work in a gas station or a grocery store, but … this is where the knights are.
at September 18, 2007

LI, this is such a great post in so many ways, it seems shabby to spoil it with a quick comment. Even saying this could come across as empty and tiresome praise, but I do want to salute the post, if nothing else, though in doing so, I cannot but salute those in the cold outside, where the knight-errants are

Thanks, Amie! I am not exactly a philosophically rigorous thinker - something hits me on the head, and I start obsessing about it, and finally I figure a few things out, if I am lucky. It is more poetry and guessing and farting around than thinking. But anyway, that comment of Mann's about the imitatio has been growin' and growin' inside me, and surely it hooks up to this knight, this prophetic knight, grown mad with his books and chivalry - grown mad in between one system of imitatio and a system of ... self-invention.

Maybe a bit like Amie, I also wanted to let you know that lately I'm enjoying your posts too much to comment on them, so I'll just say thanks!