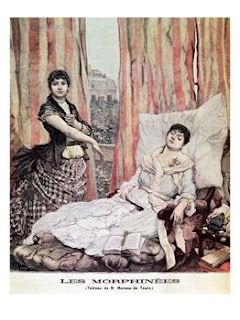 Okay, we’ve seen Barthes, we’ve seen Mallarme, is it time yet to go to the concession stand and buy the kids peanuts, and what does this have to do with our Bush era beeswax anyway, honey?

Let’s turn, shall we, he said medically, to this essay by Dominique Kalifa, a French historian very interested in the symbiotic relationship between crime and the press. Kalifa pushes back to the 1830s the “mediatic era”, seeing three things come together then: a cheap, mass circulation press; second, a press in which more can be printed (the initiative comes here from the editor Gervais Charpentier, who lead his« révolution » in 1838. Thanks to the technical possibilities opened by the mechanical presses, he created a new format, the so called « in-18 jésus » (18,3 x 11,5 cm), which permitted the offer of much more text for a price reduced by half: 3,50 francs au lieu de 7. The totality of bookstores were constrained to align themselves, engaging from than on, little by little, in the path which lead to the cheap book). And finally, another technical innovation, the illustration, where engravings, vignettes and lithographs became more and more numerous, doing their working on the writing of the text itself.”

Kalifa then jumps to the 1860s, the decade of decay (and as I’ve pointed out before, Louis Napoleon’s era holds eerie resemblances to our own – down to the coup that began it all. Henri Rochefort said, about Napoleon II, that there was a curious enthusiasm for him in prisons, among thieves. I do wonder if thieves or conmen look at Bush as a brother). Napoleon II began lifting censorship rules on the press. Thus, more radical press popped up and like that. The working class got to speak out and like that. But a funny thing happened on the way to the revolution.

“But the initiatives of the 1860s were not limited only to the universe of reading. Modernisation touched the world of spectacles (spectacle I translated, in that Mallarme piece, as side show), which entered into the industrial regime under the Second Empire. This is the case of the café-concert, which is structured in a hierarchised network of programs and venues, and it is also that of theater, of which the production diversified, attaining in 1867 an exceptional level of grosses. In the remodeled, hausmannized city, a new social spectacle outlines itself, the strolls of loiterers, the rushes on the boulevards or the refluxes of the crowd coming out of the department stores in which is specified that public taste for reality that the cinema is going to soon capture. But the most significant expample is without doubt that of the 1867 l'Exposition universelle, which welcomed to Paris 11 million visitors, the double of that of 1855. It is besides there, in that curious enterprise which conjoins social pedagogy and industrial exhibition, mixes commercial, political and aesthetic functions, where W. Benjamin wanted to see the christening of the spectactle industry.”

Which brings us up to the case of Tropmann, the famous murder whose crimes and execution were considered symbolic of the sinister atmosphere of Second Empire decay and corruption. And which we consider to be among the most significant of private murders for merging the political and the sensational in a way that was felt, even then, to be new.
at March 29, 2007

North, I hope you are keeping track of the bee strike on your site. It isn't that the bees are dying - there are no bodies. They are DISAPPEARING. The strike is finally on. There was a story about the elephants going on the rampage in the nyt magazine last year, now the bees. The earth spirit has about had it with human crappiness:

"His situation mirrors that of beekeepers around the nation. Upon inspecting their hives, they are finding that large numbers of bees have disappeared or died.

It appears that they leave the hive and are unable to use built-in “GPS” to find their way back, said Donna Brahms of Cumberland, president of the Iowa Honey Producers Association."

The GPS theory sounds like the rationalistic crap that the scientist in the zombie movie pompously proclaims before the night of the living dead claims him. Wake up!the bee gods are giving us fair warning.

No bees - no pollination - no plants - no animals - Soylent green time

ps - other fun bee spirits facts:
Democritus was buried in honey.
The old Russian bee god was named Zosim - see father Zosima in the Brothers Karamazov.
And according to an old Polish tale, when God made the bees, the devil tried to imitate him, and made flies.

Oh, you all and your bees! Cheer up! Look, the so-called "Killer Bees" are doing fine! It's the sissified left wing bees that are dying. Admittedly, the flourishing and utility of the Killer Bees probably sucks if you're afraid of being stung to death by them. Several minutes of helpless terror followed by fatal anaphylactic shock is unpleasant, I'll concede, but market efficiencies guarantee an affordable remedy -- just as they did for improving the stock of the now wussified commerical bees.

Do you know who's to blame for this? I do and I think it's time for the recriminations to begin. So I'll tell you who. It's the envirowhackos and Rachel Carson. If they hadn't driven a nail through the invisible hand -- crucified it, if you will -- the market would already have a solution and we wouldn't be talking about Soylent Green ("green", get it? Heh).

Living in the Killer Bee Red Zone, Mr. Scruggs, let me tell you something - contrary to what you may have seen on the freedom hatin' CNN, I can walk down any neighborhood in Austin without being attacked by killer bees. The killer bee threat has been decisively met.

Of course, in some of those neighborhoods, crazed packs of squirrels do seem to gather out of the shadows and attack old ladies. But you know all about that.

Are you saying Man and Bee can coexist peacefully, Roger? We can, I suppose, as long as we stand ready to pump their hives full of soapy water. It would also make a certain amount of sense to breed the more placide bees back to a modest size. But as I'm sure you know, I reject those options. I think a moral panic, pundit-bleated stupidity and a vendetta against the environmentalists offers a more lasting solution. You don't change horsemen mid-apocalypse, after all.