Roger Gathmann December 31, 2006
Nuccio Ordino, in Giordano Bruno and the Philosophy of the Ass, riffs as follows about asses: 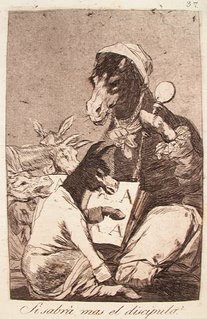 – three asinine spirits whose adventures are associated with water-purification rites – join the ass in the cycle of Dionysian myths. The ass of Hindu myth, apart from being a great seducer, is the guardian of the waters and of riches. The ass’s relation to fecundity is legitimated also by fables and myths that associate it with feminine deities; it is sacred to Vesta, mother and nurse; to the Phrygian goddess Cybele; and to the powerful Isis. In this regard, apart from asses having sexual relations with women, there is no shortage of references to cosmetic and pharmacological uses for certain of the ass’s organs as aids to many of the functions involved in childbirth and breastfeeding.

The reverse of the coin also reveals man examples in which the ass appears linked to death and the demonic. In his tale of Psyche’s descent into Hades, Apuleius only mentions the presence of an ass and its driver. Aelianus recounts tht the ass is the only animal able to resist the dissolving action of the waters of the Styx. Indeed, tradition has it that the devil is powerless against those who take an ass with them to Hell.”


In a comment on my Tom Paine posts below, faithful reader Amie has pointed to the relative philosophical neglect of birth, as opposed to the industry around death. Now, it is our opinion that LI is – however deficient in actual, concrete offspring – a big birth man. We are all for birth. And, being all for birth, we have been thinking that for this new year – the year that will spring, full grown, out of the travail of the wristwatch tonight – we wanted to dedicate the year, our year, to the ass: that fecundator, and the defier of the devil. In fact, 2006 has been building, sweet and sour post after post, to a grander vision of, well, something or other. And this is the year we propose to contemplate it – the divine earthly comedy. The anima mundi. The soul of the world. Yes, in this decade of war and planetary wear – it seems like a good time to go back to a notion that excited Giordano Bruno, and that – shrunk to Sedona, Arizona measures and become a New Age plaything – still manages, under the guise of Gaia, to crawl into the mumbles of the spiritual consumer set.

Here’s a quote from Bruno’s Ash Wednesday Supper about the soul of the world. This is more prescient than Bruno ever knew. The “Nolan”, here, is Bruno – Nundinio is John Underhill, an Oxford professor – and the dinner party is set at the house of Fulke Grenville, where it might really have happened. Finally, Pru is Prudenzio, a pedant, and Theo is Theophil, a philosopher :

“Everything is caused by the sufficient interior principle by which it is naturally stirred, and not by an external principle, as we observe occurring to those things which are moved contrary to or outside their own nature. Thus the earth and the other stars move according to the peculiar local differences of their intrinsic principle, which is their own sould. “Do you think,” asked Nundinio, “that this soul is sensitive?” “Not only sensitive,” answered the Nolan, “but also intellective, and not only intellective as our souls, but even more so.” At this point Nundinio kept quiet and did not laugh.

Pru: It seems to me that the earth, being animated, must be displeased when we dig caves and grottoes in its back, just as we feel pain and displeasure when our teeth are extracted or our flesh is pierced.

Teo: Nundinio did not have enough Prudence to think this argument worthy of being advanced, although it had occurred to him. In fact, he was not so ignorant a philosopher that he couldn’t understand that, even if the earth has sensibility, it is not a sensibility similar to ours; if it has limbs, they are not similar to ours; if it has flesh, blood, bones nad veins, they are not like ours; it it has a heart, it is not similar to ours; and so on for all the other parts which are equivalent to the parts of all others which we call animals and usually consider to the be the only animals.”

Who knew that digging enough of those caves into the earth could hurt the gigantic son of a bitch? Only the jackasses.

Anonymous said…
LI, I wish I'd read this post before hanging at the Mars Bar tonight. All I can say, for the moment, is you have to see the film Au Hazard Balthazar, if you haven't already.
I've been thinking of what you wrote earlier: "I emphasize that the living generation has a moral obligation to envision itself as potentially dead in order that the generation after it enjoy life more abundantly, on a planet in which life is to be enjoyed abundantly..."
Amen, I say. Though I feel compelled to add Ah, men...