The expulsion of the giants 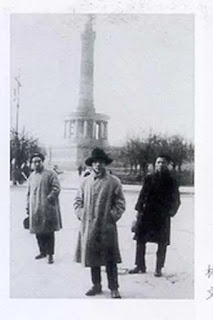 There is a valiant but small tradition of scholars who see the connection between the so called Western tradition and that of the “East”: among whom the most famous is, perhaps, Martin Buber. Before writing his masterpiece in the twenties, I and Thou, Buber published a “translation” of the Chuang-Tzu that was really a translation of the English translation of the Chuang-Tzu made by James Legge. In a wonderful essay by Jonathan Herman, “The Mysterious Mr. Wang: the search for Martin Buber’s Confucian Ghostwriter” (one of those rare academic titles that evokes the Fu Manchu series by Sax-Rohmer), the background of Buber’s effort is exposed. Sinology was constructed in the German speaking countries in the 19th century on terms that were consistent with a long theme in German culture stemming from Herder, which on one reading promoted a basic equality between cultural productions around the globe. The idea that one should accept the Chinese philosopher as an equal in the dialogue of philosophy is still more valued in theory than in practice. Few really put in that work. But in the German countries, perhaps partly due to German imperial designs on China after the Boxer Rebellion, Chinese studies held a special place. One remembers that Canetti’s Peter Kien, the protagonist of Auto-de-Fe, is a Sinologist. It is through these grids – Sinology and Hassidic Tales – that Buber was enabled to think through the metaphysics of communication that is at the center of the I – thou book. Kafka, too, in The Great Wall of China, sees China through - perhaps - Buber's eyes.

This direct link, in the early twentieth century, and other links going back to Leibniz, should be backgrounded by a certain community of motifs. For instance: the giant. A too often forgotten figure in Western philosophy.

The first chapter of the Chuang-Tzu consists of a comparison between the giant and the small, beginning with the famed fish, K’un: