The air loom gang and our present emergency 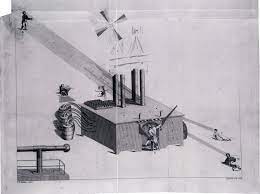 Mike Jay is an interesting writer. He gets ahold of fascinating topics, but sometimes this means he gets ahold of a drawerful of research notes and throws them in the public’s face, like in his last book on Mescaline. Excellent topic, excellent intro, and then a march through historical particulars as arid as spray on deodorant.

My favorite of his books is a more Shandian venture, illustrated beautifully, about a lunatic assassin, one James Tilley Matthews. Jay goes into the nitty gritty of this story from the 18th century – 1796, to be precise, with a story that goes on into the early 19th century – with a much more able touch. The book is entitled The Air Loom Gang, for it is this gang that had entranced and imprisoned the mind and body of James Tilley Matthews, with an intricate demonology worthy of one of  Blake’s longer poems. Matthews went mad, it seems, in the Paris of the Terror, where he was confined to his apartment and suspected of being an English spy. What he was really doing in Paris, and whether he was, indeed, a secret envoy from the British government, is one of those questions that were solved in one of those Sherlock Holmes cases that Watson was always going to publish, but never got around to.  Matthews’ lunatick ideas was that of an airloom machine, by which a 'magnetic gang', working in the bowels of London, was able to exert control over the thoughts of the powerful. Matthews lunacy was, in its way, epic, peopled by such as the Glove Woman and Billy the King, all endowed with what we would now, after a century of comic books, call “superpowers”.

Matthews was arrested in the House of Commons for making a scene. He’d screamed “treason” at the Prime Minister and seemed to be in a state of agitation – he was of unsound mind. He was condemned to be treated in Bedlam. There he was treated by John Haslam, published a full account of Matthews case, including illustrations of the Air Loom gang, thus enshrining Matthews in the Pantheon of the Schizophrenic, then Psychotic, the Paranoid – up there with Schreber and the Wolf Boy.

Jay contends that Matthews stories about being a spy were true. But he is not enshrined in the Pantheon of spies. What he came up with was a vision of a machine that emanated rays, waves of air – as well as odors – that controlled his mind, and that of others.  well, was possibly a spy.  Haslam ‘s account is the first detailed one we have of a motif that crops up over and over again.  Mind control machines – ‘Beeinflussungsapparates’, as Victor Tausk called them – appear as a standard delusion among the paranoid schizophrenic. Tausk found this out in WWI, when he worked in clinics in Slovakia. In his most famous paper, “On the origin of the influencing machine in Schizophrenia”, in 1919, he discusses the pattern and its meaning. He introduces a very famous case to the literature in this passage: “In machine dreams, the sleeper awakens, more often than not, with her hand on her genitalia, after having dreamed of manipulating the machine. It may, therefore, be assumed that the influencing apparatus is a representation of the patient’s genitalia projected to the outer world, analogous in origin to dreams…. … The patient is Miss Natalija A., thirty-one years old, formerly a student of philosophy. She has been completely deaf for a number of years, due to an ulcer of the ear, and can make herself understood only by means of writing. She declares that for six and a half years she has been under the influence of a machine made in Berlin, though this machine’s use is prohibited by the police. It has the form of a human body, indeed, the patient’s own form, though not in all details… The trunk (torso) has the shape of a lid, resembling the lid of a coffin, and is lined with silk or velvet.” Matthew’s fits came almost ten years after Thomas Paine’s The Rights of Man, but I think we can already discern something like Matthews notion of an underground Airloom in that wonderful work. The Rights of Man begins with a full court assault on Burke’s Reflections on the Revolution in France. The first issue that Paine takes up is Burke’s insistence that, in England, the right to revolution had been signed away in 1688: “…That men should take up arms and spend their lives and fortunes, not to maintain their rights, but to maintain they have not rights, is an entirely new species of discovery, and suited to the paradoxical genius of Mr. Burke. The method which Mr. Burke takes to prove that the people of England have no such rights, and that such rights do not now exist in the nation, either in whole or in part, or anywhere at all, is of the same marvellous and monstrous kind with what he has already said; for his arguments are that the persons, or the generation of persons, in whom they did exist, are dead, and with them the right is dead also. To prove this, he quotes a declaration made by Parliament about a hundred years ago, to William and Mary, in these words: "The Lords Spiritual and Temporal, and Commons, do, in the name of the people aforesaid" (meaning the people of England then living) "most humbly and faithfully submit themselves, their heirs and posterities, for EVER." He quotes a clause of another Act of Parliament made in the same reign, the terms of which he says, "bind us" (meaning the people of their day), "our heirs and our posterity, to them, their heirs and posterity, to the end of time." Mr. Burke conceives his point sufficiently established by producing those clauses, which he enforces by saying that they exclude the right of the nation for ever. And not yet content with making such declarations, repeated over and over again, he farther says, "that if the people of England possessed such a right before the Revolution" (which he acknowledges to have been the case, not only in England, but throughout Europe, at an early period), "yet that the English Nation did, at the time of the Revolution, most solemnly renounce and abdicate it, for themselves, and for all their posterity, for ever."”

This is a mind control machine indeed. And I believe, from a psychoanalytic perspective, that it is very much present in conservative thought. That a document – square pieces of paper in a book – could bind future generations for ever is, of course, a commonplace not only in the discourse of evangelical literalism, but in its twin, judicial strict construction. Here is an object that takes over the mind and the subject. Here is an objectification of all our sexual anxieties, and the solution to same.
In a peculiar way, Paine sees in Burke’s logic something like Natalia A.’s coffin double: this is a coffin double of England, constructed by the dead to control the living.  To us, this notion of the claims of the living and the need to ward off the dead casts an ethical shadow insofar as, from the aspect of the imagination, the living, now, are potentially the dead of the next generation. Thus, out of Paine’s idea, we can see an ethics that addresses the question of our limits, as the living – notably, our limits on using up the resources of this planet, or damaging it in some way. That this ethical issue should, on the shadow side, be a struggle against paranoid schizophrenia is … well, something we are seeing enacted before our eyes as the body of women are nailed shut by a supreme court in thrall to the most paranoid reach of Burkean conservatism.