From the now defunct willetts site: 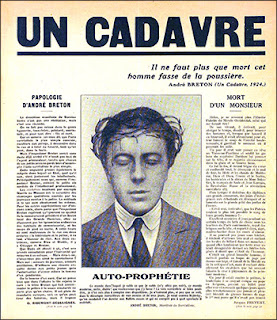 Cancel culture was born on October 18, 1924, when a pamphlet was thrust upon the world entitled: A Cadaver. The subject of the pamphlet was Anatole France, a Nobel prize winning author whose death, on October 12, 1924, was announced on the front page of the New York Times under the headline: Anatole France Great Author dies … Author of “Thais” and “Le Jongleur de Notre Dame” Classed as Leader of Modern Stylists”. The writers of A Cadaver (Andre Breton, Louis Aragon, Paul Eluard, etc.) were having none of this. The pamphlet was a surrealist action of the most violent and definitive kind. Breton classed Anatole France with the “cops”, and wrote: “With Anatole France, a little human servility goes out the door.” Eluard, under the heading, An Old man Like the Others,  wrote mockingly to France: “The harmony, ah, the harmony, the knot of your tie, my dear corpse, your brain on the side, everything arranged beautifully in the coffin and the tears that are so sweet, aren’t they?” But it was Louis Aragon who really ripped poor Anatole France’s corpse another asshole. Under the heading: “Have you ever slapped a dead man?” Aragon attacked the whole idea, the stink and the shallowness of “beautiful writing”, and wrote: “I declare that every admirer of Anatole France is a degraded being.” It is polemic in the highest ranting style:

What flatters you in him, what makes him sacred, please leave me in peace, is not even the talent, which is arguable, but the vileness, which permits the first louse that comes along to exclaim : How is it that I never thought of this before !

“Today I am in the center of that mildew, Paris, where the sun is pale, where the wind entrusts its horror and its inertia to the smokestacks. All around me I see a dirty, poor busy-ness, the movement of the universe where all greatness becomes an object of derision. The breath of my interlocutor is poisoned by ignorance. In France, they say, everything ends up as a song. Let he who dies in the heart of the general beatitude go up in smoke in his turn! There is little that remains of a man. It is even more revolting to imagine that one, who was, in any case, a man. On certain days, I dream of an eraser that could wipe out all of this human stain.”

This is how you do cancellation, my droogs.

In this case, the surrealists succeeded beyond their wildest dreams. By 1930, literary lights like Blaise Cendrars were claiming that France was “boring,” and Andre Gide put in the boot by saying that his oeuvre was “not considerable”. Yet when he was alive, Anatole France held a position in the overlapping worlds of literature, culture and politics that was similar to that held by, for instance, Saul Bellow in the U.S. It is hard to imagine Saul Bellow being spit on to this enormous extent when he died…

Except that Bellow did, in a sense, imagine it. Bellow sampled his own heckling by students in 1968 by working up a similar scene in Mr. Sammler’s planet:

“A man in Levi's, thick-bearded but possibly young, a figure of compact distortion, was standing shouting at him.

In the silence, Mr. Sammler drew down his tinted spectacles, seeing this person with his effective eye.

"Old Man! You quoted Orwell before."

Sammler could not speak.

"Orwell was a fink. He was a sick counterrevolutionary. It's good he died when he did. And what you are saying is shit." Turning to the audience, extending violent arms and raising his palms like a Greek dancer, he said, "Why do you listen to this effete old shit? What has he got to tell you? His balls are dry. He's dead. He can't come."

At the time Mr. Sammler’s Planet came out, George Orwell had already assumed a rank at the top of the pantheon of brave “truth-tellers”, so the cancellation of Sammler and of Orwell together in one taunt – such a bearded and testosteroned one too! - was loaded with voltage. Of course, Bellow’s characters are always haunted by a ghost at the heel, taunting them with the idea that they are only ham actors, all of their beautiful thoughts only occasions for various big wig louses to say, how had I never thought of that before! Charley Citrine has Von Humboldt Fleisher, and Herzog of course is in flight from Valentine Gersbach. But in this gallery Sammler is special, since his cancellation moment is so entirely public, and so entirely on terms that Bellow felt were the only real terms – such was Bellow’s problem with women.

Twitter has become, for the media establishment, what the heavily bearded young man was for Artur Sammler – an emblem of the end of the world in sheer barbarism and blasphemy and insulting of George Orwell. Of course, in the media establishment, it is very hard to get canceled. Noam Chomsky managed to do it by criticizing American foreign policy after the Vietnam war, when the wound was healed and all bien-pensant American “thought leaders” agreed that America had the most adorable and charming plans for the rest of the world (and was only being misunderstood as it spent trillions on the military and put these plans into effect by invading Panama City here, helping the stray Salvadorean death squad there, droning (accidentally!) some Yemeni wedding over in the corner, and so on). Otherwise, you will never find the deck chairs changing very much on the opinion pages of the great dailies, nor will you find Meet the Press or that ilk of tv inviting on anybody ‘foreign” or really anybody except its usual quota of great white male politicos and pundits. Even when a figure, like Mark Halperin, is discovered to be a serial groper and goes down, his media friends have a hard, hard time letting him go – as do his friends in both party establishments – and they keep campaigning to uncancel that pitiful mook.

Of course, the media establishment does not extend this courtesy to the rest of toiling humanity. The NYT business page looks on with equanimity when a corporation, stuffed to the gills with cash, decides a mass layoff is just what they need. You will never hear the words “cancel culture” applied in such cases. Rather, it is a matter of cash flow. When Uber recently “downsized” its work force, this is how the New York Times reported it:

“In response, Mr. Khosrowshahi has shaken up Uber’s top ranks and tried to cut costs. After cutting jobs in the marketing team in July, he instituted a monthlong hiring freeze and instructed executives to re-evaluate the size of their teams. In addition, he pushed out top executives, including his chief operating officer and chief marketing officer. Uber’s board has also undergone some turnover.”

When, on the other hand, a twitter user made a joke about Bret Stephens being a bedbug, the NYT not only permitted Stephens to write a whole column about it in which the great Stephens compared himself to all those who suffered at Auschwitz, but various member of the media, who gathered around Bari Weiss at her recent coming out party, sniffed loudly about the de-platformin’, generally wrong-headed youth, spiritual descendants of Louis Aragon, louts all:

MSNBC anchor Stephanie Ruhle, who has frequently hosted Weiss on her morning show, deplored “cancel culture.” “On a regular basis,” she said, “people say to me, ‘I wouldn’t say that in public.’ As soon as people start to retreat and not share their views, it’s bad for society and culture.” – from Boris Kachka, New York magazine http://nymag.com/intelligencer/2019/09/bari-weiss-book-party.html

Times, admittedly, have changed since an Anatole France could be celebrated as a master “stylist” on the front pages of great American newspapers. Bourgeois society’s need for intellectual legitimation – for a certain protective, brainy smugness – is now supplied by a legion of pop scientists, mostly white, male, and willing to consider the tough questions: such as, why does nature shower white males (such as me) with such genius and brilliance and money? And the answer they come up with is – it must be the genes! The function, though, is the same. Anatole France, it must be said, was not as much of a smug idiot as our current iterations of Steven Pinker. His reputation went into a tailspin, but one has to say that a man who could attract kudos from such various sources as Edmund Wilson, who devoted a chapter of Axel’s Castle to him, Ford Maddox Ford, who named Conrad, James and France as the great novelists of his younger days, and Kenneth Burke, was not a total loser. Proust took certain elements from France’s life and made him into the character Bergotte, which is, sadly (for France, at least), how he is best remembered in the Anglophone world.

Still: hooray for the surrealists! And hurray for the twitter mob! There is something so, well, right about Stephanie Ruhle’s friends whispering their sweet little bigotries in her ear and then admitting that they are afraid to say them in public. Not, of course, that they won’t – to the chauffeur, to the maid, to the clerk at the store, or to any unfortunate who serves them at a restaurant, over and over again.

The hallmark of cancel culture is the fact that the firing, the layoff, so admired in America – Trump is, literally, president because he starred in a reality show that was all about firing people – has now been seized by the fired. They are, as it were, firing back. Louis Aragon, at least the Louis Aragon who, as a mere cricket, shit on all the literary bigwigs, would be pleased.