the dystopia of police unions 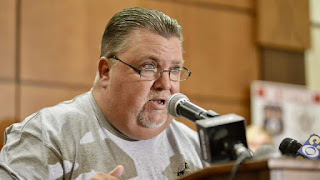 The question of the police and policing is confused at the outset by the terminology of the tool, the instrument. Even those criticizing the police – such as myself – have a tendency to portray them as the tool of the upper class. In a sense, the tool image is ingrained deeply into the discourse the police have woven about themselves, the discourse of serving the public, or protecting the public.

This misses the crucial political agency and power of the police. It is not simply the selectivity of enforcing the law, the choice made to, say, arrest the black consumers and sellers of illicit drugs and to let white prosperous neighborhoods slide, although it is easy to imagine the police pulling no knock searches on penthouses and mansions in Beverly Hills or NYC’s West side and finding hella cocaine to rock those people to pleas in court. It is also the pressure put by police and their unions to pass certain laws, to create certain immunities, to imagine the community according to police interests. In Minneapolis, a midsized Midwestern town, one can trace a history from Charles Stenvig in the sixties to  Rich Stanek in 2018 to Bob Kroll, the current head of the Police Officers Federation of Minneapolis.

This is Bob Kroll:

“There’s been a big influx of PTSD,” Kroll said. “But I’ve been involved in three shootings myself, and not one of them has bothered me. Maybe I’m different.”

“… local protesters had employed a new tactic, turning up atthe home of a Philly cop who in June had fatally shot a fleeing black man inthe back.
There had been just 10 or so protesters, one wielding a megaphone, but it was enough to disrupt an otherwise quiet Bustleton neighborhood and rattle police, who’d never been confronted at their homes before. Now McNesby was getting his turn at the podium. A measured approach could have smothered the smoldering tension in the room; instead, McNesby doused it with gasoline. “When you go work each day,” he spat into the microphone, “you shouldn’t have to worry that a pack of rabid animals will suddenly show up at your home. … ”

The Phillymag article is one of the rare ones that actually focus on the driver of police activity and politics, instead of on the windowdressing of police commissions. Here’s another graf:

“Some greatest hits here locally: In June 2010, McNesby declared stringent new rules regarding police misconduct “would be at the bottom of a litter box pretty soon,” then successfully challenged them before the Pennsylvania Labor Relations Board. In 2012, McNesby mocked the civilian-run Police Advisory Commission, stating: “No one pays any attention to them.” And in 2015, McNesby declared the mayoral candidacy of former DA Lynne Abraham — a longtime tough-on-crime, pro-cop politician — to be over after she spoke to FOP members about pension changes and progressive reforms.”
Because the discussion about “ending policing” is probably not going to result in “ending policing”, I would think a better direction to take would be – curbing police unions. For instance, making sure that policemen who shoot or taser or maim and then cost the city’s thousands in civil suit damages are fired. Simply that. Why should cities be drained to support employees who wild? But even something as simple as that is not going to happen as long as police unions, interlocked with the Republican party and various rightwing organizations, have the upper hand.
It is rather amazing that the dream of a society in which the worker, through unions, has parity with Capital was only realized by… the police. But here we are, in the era in which past utopias are transformed into dystopias right before our eyes. This doesn’t have to be like this.