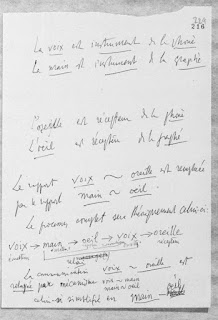 I don’t remember my first writing lessons. The bubble and squeak of my first letters, those wobbly circles and jerkily disproportionate lines which flowed out of my pencil onto the cheap, thick, lined paper – I can only envision them through their descendants, the degenerate scribble of my declining years, where the bubbles are less bubblicious and have been through the rat race. But I can remember the devises that went into writing – that paper, the thick lines spaced just so and the dotted line between them, the thin, bright yellow pencils with the little intaglio number near the metal band the holds the erasor, and the sharpeners. The little oblong plastic box with the hole in one end for the pencils and the two evil little blades that would bite into the cedar-y matter of the blunt end and shave off perfect little fans of thin thin wood. As well as a dusting of pencil lead, which would somehow get on my fingers.
There was a subtle competition, I remember, between the brilliant hand pencil sharpener and the noiser larger unit you would usually find at the front of the classroom, bolted to a corner of the teacher’s closet. That was crank run, which meant using your whole arm to turn it. It had a thick plastic disc with different sized holes through which to stick different thicknesses of pencil. Somehow, I associated that pencil sharpener with industry – with steel mills and tanks and such. It would make much more racket, which would draw attention, especially if you were sharpening a pencil during a test.
This, then, was the entourage, the court around the monarchical activity of calligraphy. In my case, mere graphie – I have never been a beautiful writer. In the third grade, when we started having spelling tests, I did poorly – it was my poorest subject on the report card. For one thing, I had a sovereign contempt for the homework, which bored me. Lists of words to spell seemed infinitely less interesting than lists of words, such as you would find in the dictionary. I was always a dictionary stan. I don’t remember any real problem with my handwriting as far as teachers were concerned. But it didn’t satisfy me none, as I got older. I wanted to be able to write the address on an envelope with a real piss elegance. I wanted my various scribblings to look more intense in my notebooks. I wanted some famous dead writer’s handwriting, but I only ever have had my own.
In France, I am discovering, handwriting is not dead. One of the standard thumbsucker topics in the U.S. is: Is the computer killing handwriting? The wee-est toddler in Manhattan, we are assured, knows her way around the keyboard. There are keyboards in Paris, even portable phones, but the school system is curiously centered on handwriting. I’ve been assured that Adam must practice his handwriting if he is to get anywhere in the terribly hierarchic French school system. Parents even show each other specimens of their children’s handwriting, worriedly.
I worked, as a grad student in philosophy, on Derrida – but it has only been in the last few years, experiencing the French education system, that I quite understood the social context of Derrida’s emphasis on writing and the place of logocentrism. For the French, the dictée is at the heart of the curriculum. There really is no American equivalent. Teachers in my elementary school never gave us set speeches that we were supposed to listen to and write, that I can remember. Of course, I recognize in the dicteé a genealogical kinship with the classical educational system of the Greeks and the Romans, but the American school system broke away from that family tree when Ben Franklin invented the lightning rod – or something like that. Americans have always been, they like to think, practical.
This has lead to a curious neglect of the oral-to-hand culture in the States. I am rather pleased with the ingrained habit of the dictée and how it organizes, subtly, the whole French system. The hand, here, still leaves its mark on the text. But try as I may, I can’t get too anxious about Adam’s handwriting. I’m just too American.
at June 29, 2020