on sebald's vertigo: an article at Willett's Magazine 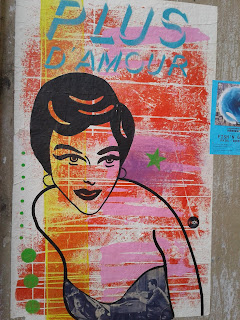 In 1821, Stendhal was on his downers. He had fled Italy on the advice of certain authorities, who knew he was in line to being scooped up by the cops because of his association with certain  revolutionaries. His hated father had died – on the bright side – but his inheritance was paltry – on the down side. So he was in Paris, making the rounds of the salons of the opposition, and writing journalism for the English papers from the scoops he’d gather. It was in these conditions, between brilliant banter and nostalgia, between personal penury and the hôtels of the bourgeois grandees, that he  sat down and wrote his first book – which was also the first tryout of his pseudonym (his real name was Henri Beyle). On its publication, Love [De l’amour] was received, even among his friends, as a puzzle or a mystification. In an essay on Stendhal in the London Review of Books, Tim Parks noted that Etienne-Jean Delécluze, in whose salon Beyle met the leading lights of the liberal opposition, “wondered whether the pages might have been bound in the wrong order.” Beyle claimed that the book only sold seventeen copies. The feeling of being wrong-footed by this book is often shared by contemporary readers, who find in the book a confusing mixture of aphorisms, anecdotes, and the dry remains of a treatise on passion within the framework of Beyle’s creaky old master, Cabanis, the inheritor of the enlightenment sensualist tradition that reduced all claims, transcendental or aesthetic, to the hedonic facts of human physiology – that is, to pleasure and pain.  This seems a framework ill suited to Beyle’s attempt to show that love of a certain type – passional love, which seems to find pleasure in its pain, and pain in its pleasure – is the true measure of human elevation, but such is the course he lays out for himself. It even becomes his measure for assessing the level of cultural liberty within the different societies of Europe.

One hundred and sixty nine years later, W.G. Sebald published his first “novel”, Vertigo [Schwindel. Gefühle], also a wrong-footing book in as much as its tone and subdued narrative – if narrative there is – seem contrary to the canons of fiction in our time. The first chapter is entitled “Beyle: or love is a madness most discrete.” Sebald, drawing largely from Love  and other autobiographical writings, constructs a portrait of Beyle  that, behind the reader’s back,  employs certain fictional slights of hand, displacements of fact, distortions of context, amalgamation of incidents, to produce a Beyle who corresponds in some larger recognizable sense to the historical figure, but in the narrower sense corresponds to that figure very much caught in the narrator’s filling in, for his own purposes, of the historical lacuna. His very use of “Beyle” instead of “Stendhal” has a de-familiarizing thrust, in as much as it points to the duplicity of “Stendhal”: one of the affects of a pseudonym is the feeling it gives of making the bearer of the real name something of an imposter, a fake, a counterfeit, a parvenu in the domain of his own fame and reputation.
Sebald wrote his book in the 1980s – which was a time, not unlike the 1820s, when the predominant political tone was one of restoration, with the power in place (Thatcherism, Reaganism) overtly working against the democratic socialist ideals of the period between 1945 and 1980. The latter had legitimated itself, vaguely, with reference to the ideals of the Atlantic revolutions, and not surprisingly the French Revolution was busy being “re-evaluated” by conservative historians during the 80s, and blamed for all the evils of totalitarianism.  Yet Sebald’s work is usually not connected to this background, but rather to World War II. Born in 1944, Sebald carried with him a certain cloud of melancholy that was all about the Nazi era that he never really experienced, but that marked all the adults around him in the Germany in which he grew up. It was like he was born on the exitus of some black hole. There are accidents you keep looking back on all your life, and understandably, for a European, the meat mangle of World War II is one of those kinds.  This motif pervades one of Sebald’s most important essays, History and Natural History, an essay on the literary description of total destruction…, which was published in 1982 and caused a large and continuing controversy in Germany, because of the weight it put upon the air bombardment of Nazi Germany – which struck some people as an apologetic and nationalist move, even though Sebald was neither a nationalist nor particularly into any school that made Germany a “victim”. In that essay, Sebald asks how one can create an “authentic literary reflection” about the “extreme reality of our time”  – which is a question that is partly answered in his series of novels, beginning with Vertigo.