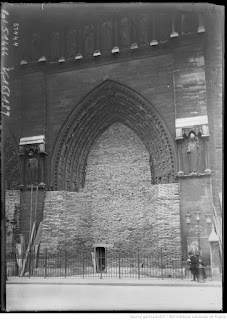 The nineteenth century went crazy about architecture. As Haussman went about bulldozing the ancien regime in Paris, the gothic craze and statuemania made Paris streets into a spectacle for stone eyes. Ruskin in England had an influence that it is now difficult to understand: his melding of architectural critique and red Toryism – an aristocratic anarchy, protesting against the industrial age as a huge smudge enveloping human life – was so important to Gandhi that he made the anti-industrial, home cottage message into a program of independence. Viollet-le Duc made the case for restoring the gothic cathedrals of France – and even if restoration here sometimes seems like vampirism, it did succeed in making France aware of its vast fleet of stone spires and towers. Perhaps the last architectural critique with this popular pull was Adolf Loos in Vienna, whose pamphlet about ornament kicked off a functionalist revolution – a sort of anti-statue mania.

The esotericists were as busy with the newly discovered cathedrals. Employing the archeological method – the digging up of old writing systems and the translating of them – the esoteric interpretation of cathedrals was a sort of popular sport among Rosicrucian fans. The standout text in the 20th century is by a pseudonym, whose identity is disputed to this day: Fulcanelli.
Fulcanelli wrote two books: One with the very fullbodied title,  Les Demeures Philosophales Et Le Symbolisme Hermetique Dans Ses Rapports Avec L'Art Sacre Et L'Esoterisme Du Grand-Oeuvre, which I’d translate and truncate as Philosophical dwellings and hermetic symbolism; and the other, The mystery of the cathedrals. The latter was translated into English and published by an organization based in Las Vegas called “The Brotherhood of Life”. This ain’t no Dan Brown mismash, but the real goods, on the Gurdjieff level. Whoever Fulcanelli was, he knew his literature, and he knew the key principle: by indirection find direction out. Whoever he was – the cloud of unknowing around Fulcanelli served its purpose well, in the shadowy channels of “secret knowledge”. He presented himself, in the texts, as an alchemist. Certain occultists – the kind that show up in Gravity’s Rainbow at the White Visitations – claim to have known him.  In the 1920s, philology started to become modernist. Instead of reading poetry as the inspired expression of the poet, one began to read it as a machine in which the standardized parts functioned quite apart from the individual variations of the makers, even as those variations produced the real cultural value of the machines – the machine, as it were, churns out the poet, rather than the other way around. This form of reading, which sometimes seems to be a reading against the grain of the text (the key terms here are irony and ambiguity), was employed as well by the esoterists and alchemists – in fact, surely the New Criticism has certain occult roots. What doesn’t?

Mediapart made fun, today, of the proliferation of Hugo references – although the citations of Hugo are rarer. As one who tried to leap into Notre-Dame de Paris myself, a few years ago, and was defeated about the time the gypsy queen saved the poet, I can understand not digging through that gargoyle strewn text. Huysman, who went from Satanist to Catholic ultra, was converted as much by the cathedral itself, and its messages, as anything in the Gospels. And me? I am not a Christian, but a Spinozist, or perhaps no -ist at all. To me, the cathedrals and the pictures I have seen of Hindu temples in India at the same time are amazingly alike – buildings that are forests. And I believe in forests.