the NYT in the "I DONT CARE. DO U?" era, Yemen atrocity edition

In the "I don't really care. Do U" era of American history, there is so much to note! So much gets away, as worse things come faster and faster. But nevertheless, when the NYT opinion page writer Roger Cohen makes a special effort to justify the genocidal war being waged in Yemen, I think it deserves some mention, don't you? 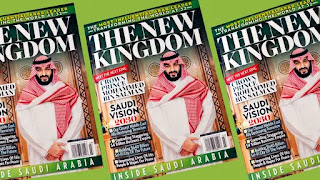 American media has a tendency to simply copy the rhetoric of the Saudi dictatorship as it praises its new dictator, Muhammed bin Salmon. The publisher of National Enquirer actually flooded grocery stores with a grotesque travesty of Saudi propaganda recently entitled "the New Kingdom". The Daily Beast had a fun time slice and dicing it:
"The New Kingdom doesn’t feature any salacious gossip about MBS, but its coverage is just as breathless. “Our Closest Middle East Ally Destroying Terrorism,” the cover coos, sidestepping decades of Saudi Arabian financial support for terrorist groups and ideologues. It Disneyfies Saudi Arabia as “the Magic Kingdom.” It’s easily the most uncritical encomium to MBS since Thomas Friedman."
The reference to Thomas Friedman, the prat whose column about the Saudi dictator did perhaps one of the most thorough jobs of kissing ass ever known (you will not find a porn film that thorough, I guarantee), is of course a columnist for the NYT. Now, the NYT has pretensions, one of which is that it is some degree better than the National Enquirer. Thus, its would never do anything so undignified as present a thirty page gaudily photographed paen to Muhammed bin Salmon. No, it presents instead a two page thumbsucker, balancing the view that he might be the greatest Middle Easterner since Jesus Christ with the view that um, he might have a few flaws. This was penned by Roger Cohen, another of the predictably neo-lib foreign policy "analysts" that the NYT keeps around to remind us that free trade and pro-US authoritarianism are what makes the free world sing.
In the course of Cohen's asslicking, he does bravely approach the Yemen war.
(Brief reminder: Yemen over the past year has suffered around a million cases of cholera. And as the Saudis have been blocking Yemeni ports for the past two years, it is estimated that 50,000 kids died from starvation there last year. You wanna quick rundown, go to wikipedia  Go fast, cause in the age of net non-neutrality, it will probably be hard to find stuff like this about countries rich enough to stamp it out.)
So what does Cohen say about those 50,000 children?
"Most Saudis view it as a war of necessity; Prince Mohammed could not accept a surrogate of Hezbollah, itself an Iran surrogate, on his southern border. That’s a legitimate strategic objective. But absolutism in foreign policy tends to be self-defeating."
Ah, of course. Most Saudis were just aching to attack Yemen. Cohen has very fine x ray vision. He has talked with Saudis far and wide, in his excellent Arabic, he has - oops, the record is scratching, take the needle off! Cohen, it should be said, knows as much about what most Saudis think as he knows about how to cure hoof and mouth disease. As for the Hezbollah comparison, it is too funny. You mean, the Saudis couldn't accept a popular Shi'ite group that provided rudimentary social welfare in Yemen?
The moral flailing of the NYT when it comes to crucial U.S. allies - crucial, that is, if U.S. is to continue to be a plutocracy - is pretty easy to attack. But I did think there would be some modicum of shame. There isn't. Cohen talking of Muhammed bin Salmon as a "reformer" rather than a dictator like Assad, willing to wade through any amount of blood to keep power, is a spectacle to make the angels weep. But whenever the new edition of the NYT comes out, in the morning, the angels weep. The angels are getting tired of it. So am I.
at June 22, 2018