toy story 2 and the communist manifesto 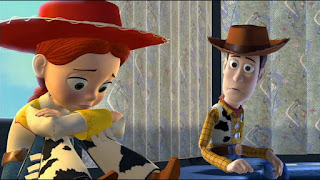 Not having children in the 1990s, I looked down with complete disdain at kid’s movies. Or, actually, I didn’t look at them at all, but I’m sure I would have shown some sort of snickering adolescent attitude towards them, and covered it up with a buncha five dollar words.
Now, of course, I am immersed in children’s movies, videos, tv shows, and general Youtubealia. Which brought me with a bump of recognition to Toy Story 2. I promised Adam we’d watch it, and we did, Saturday.
It surprised me. Talk about a savage attack on capitalism!  For those who haven’t seen it, the toys are dream figures of the proletariat. On the one hand, for capital, represented in the movie as white kids and parents, toys are lifeless. Whenever the gaze of some parent or adult is present, the toys fall into a dead faint, in poses characteristic of toys that are scattered across the floor on a Saturday evening (insert here picture of our floor after Adam has finished with it). In reality, though, they have a separate life of their own, a life of precarious solidarity.  Yet that toy life is riven by the attitude towards Capital.
Interestingly, in the 90s, the upper administration decided that the work force needed the inspiration of new age therapies and Harvard business school lingo to “incentivize” them.  In the Working Life, Joanne Ciulla cits a study  which polled managers about the most efficient incentives for building employee commitment: "The researchers found that most senior managers believed that celebrations and ceremonies and non-cash recognition were the best incentives for non-managers... But for senior managers, they responded that the best incentive was cash rewards tied to quality performance." The heartbreaking thing about celebrations and ceremonies is that they substitute for an intangible yet evident cure for alienation that long frustrated Marxists in the 20th century: employees really do become loyal to their companies.  As witness the phenomenon of 401ks, in which employees, given choices to invest across the spectrum, have a distinct preference for investing in the companies they work for – in touching contradistinction from their CEOs, who as often invest betting against their companies, if they aren’t loading them up with debt in order to LBO them. Similarly, the toys confess to each other that when they are selected by the kids, when they are “loved”, they feel alive. Of course, the only time they are alive is when they are with other toys. Such are the cultural contradictions of late capitalism.
Two sequences in particular have a startling realism. In one of them, Woody the cowboy toy is torn by his “owner” – in much the way say Monsanto carelessly poisoned its asbestos workers, then sold that division to haliburton. Woody’s owner is bummed about the torn arm: he drops Woody to the floor, and all sick at heart, leaves him behind as he goes to Cowboy camp. Which, it is easy to see, represents Davos. Woody, falling asleep, has a terrible dream in which his owner – Capital – tosses him in the garbage, along with all the other wounded toys, who drag him under as he is calling to his owner. Of course, here, in living color, is the whole reserve army of the unemployed,  demonized by Capital and viewed with loathing by the same workers who are simply a drop away – a profit loss away, or an “efficiency” away – from joining them.
The second sequence even gets a song. Here, the gender note is struck. Jessie the cowgirl lived in perfect love and harmony with her owner, Emily. Obviously, she thought of them as bound up forever, such is the burden of the song. But Emily turns out to be intent on cracking that glass ceiling. Yes! Instead of shaking up the patriarchal order, she’ll simply assume a higher function in it and pretend that this is equivalent to shaking up the patriarchal order. In order to make cruelly clear how this works, Emily doesn’t just throw Jessie away – she stores her in a box labelled “donations”. Of course, it is a good work, giving little Jessie to charity. One imagines Jessie will be one of the lucky “poor” people uplifted by our trade treaties so that she can go to a dangerous factory, work 16 hours a day for 18 cents an hour, and whip inflation now in these here states. This sequence is such a painfully accurate satire of Clintonism that I am surprised the film made it past Pixar’s censors.


When the film was over, Adam pronounced it his favorite movie. Mine too, for the moment.
at January 17, 2017