signifyin comedy, or the tale of a melon 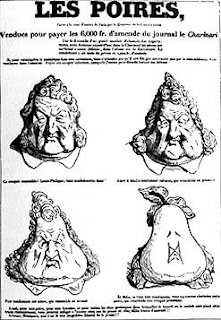 André Gill was one of the great caricaturists under Louis Napoleon. He begins his posthumous autobiography, Twenty Years in Paris, thusly: “One beautiful morning in the month of August, 1868, my best friend, he who shares all my pains and joys, and – to put it all in a word – also my underclothes, stopped, at the corner of Rue Vavin, in ecstasy before a melon.”

That Gill begins by describing himself as his ‘best friend” is perhaps a little less funny than eerie, considering that this autobiography was written, apparently, in Charenton, the madhouse where Gill had been committed – and where he died. The melon story is funny, however. Gill buys that wondrous melon, and then decides to he must draw it. Gill, by this time, had already gotten into trouble with Louis Napoleon’s censors for his drawing of Rocambole, the gentleman thief – a drawing that looked oddly and coincidinkily enough like Louis Napoleon. The censors had closed down Gill’s outlet, La Lune. But surely nobody could find a drawing of a melon subversive…

Except perhaps those who remembered a certain spate of drawings depicting pears. Under Louis Philippe, caricaturists had captured a certain pearness to Louis’ face – and, under a censorship that had eliminated Louis Philippe from the repertoire, had contented themselves with drawing the pear itself. This wondrous multiplication of pears put the censors in a ridiculous position – they faced, here, that French ‘gaiety’, or Baudelaire’s significative comic. And yet, what is a pear? A pear is the apotheosis of the banal. The reality of Louis Phillipe’s face, its soul, so to speak, was a pear.

Gill – and surely the censors – remembered the pear.

So L’Eclipse published the drawing of the melon. It was a drawing of the melon split open. The split made the melon like a puppet face, one with a big slash for a mouth. The censor originally passed it, but when the melon was published, the state, in its infinite wisdom, decided to get out from under the ridiculousness that haunted Louis Philippe’s censors by accused the paper not of a political crime, but of obscenity.

The state bureaucracy, that product of the highest rationality, is also – as Gogol knew well – always on the edge of a dream. Or rather a nightmare. And by that logic, censoring the melon as a caricature of the head of state would be worse than allowing the caricature of the head of state, since the main and important thing was not to connect Louis Napoleon’s court with a melon. As Gill said, this was pretty stiff on the part of the authorities:

‘As the scribble [croquis] didn’t represent anyone, it was easy to apply the intention to to anybody, and each for himself made the reference for his “bete noir”. “

And Gill references one of the names that were thrown out: Delesvau, the president of the sixth chamber. Famous for currying to the court by making a series of ‘wicked arrests”.

Gill had the happy thought of procuring another melon, that he took to court with him, with the intent to prove that there was nothing obscene about a melon. The judge, however, merely looked at the drawing of the melon, and looked sadly at the defendant, and dismissed the case.

Such is the power of ridiculousness in a falling regime.
at January 12, 2010