Gundling, saint and martyr of all tenure track positions 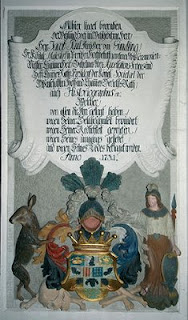 On her blog, IT has often complained about the how academic departments are sliced, diced, roasted and toasted until all inspiration and genius are squeezed out of them and a tepid mediocrity, suitable for children and all future consumers, can be safely served up in Intro class dollops.

On the way back from Chicago, we were reading The Rise and Downfall of Prussia, and we came upon the story of Jacob Paul von Gundling. Gundling should surely be the patron saint of all oppressed assistant professors, lecturers and grad students, as he died for y'all's sins. So here is his story.

Gundling had worked himself up to a pretty sweet position as the official historiographer for Frederick I, a man who loved nothing more than French ceremony. Alas, when Frederick died, he was succeeded by his son, the surely half mad Frederick William I, Frederick the Great’s Pa, who hated culture and all its accoutrements. Gundling scrambled, being in debt there in Berlin, and Frederick William soon had him working on economic policy. But he also decided that Gundling, being a prof, made an ideal court buffoon. Which entailed things like:

Having to deliver a lecture on the existence of ghosts while being forced to take regular draughts of strong drink – and as Gundling got too drunk to stand, he was frogmarched back to his room where he shrieked in drunken terror as one of the court retinue visited him in a white sheet;

Confinement in a chamber with a number of young bears, while fireworks were rained down upon his head;

Being forced to dress in a caricature of Louis XIV’s court fashion, including wearing a towering wig that used to belong to Frederick I;

Being force fed laxatives and locked in a cell;

And finally – “Gundling was forced to tolerate the presence in his bedchamber of a coffin in the form of a varnished wine barrel with a mocking verse:

Here there lies within his skin
Half pig, half man, a wondrous thing
Clever in his youth, in old age not so bright
Full of wit in morning, full of drink at night
Let the voice of Bacchus sing
This, my child, is Gundling...” (82)

When the poor Gundling died, he was propped in the barrel dressed in a wig hanging down to his thighs, and turned into a spectacle, briefly, that people could pay to look at. The funeral address was given by one of his bullies at the court.

So, consider Gundling, all ye who suffer from tenure anxieties, toil and spin in departmental meetings, and are heavy burdened with academic ennuie, and remember that it could be worse!
at August 07, 2008

I think to gundle should be a verb. It means to make the life of an academic miserable. Thus, They gundled me, My department is in gundling mode, etc., etc.

Word up. *Pouring a drink out for my new homie, G-Money.*