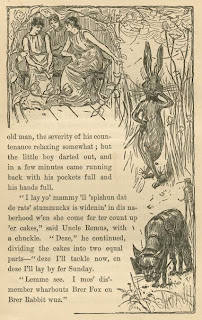 Many a reader of Plutarch’s Lycurgus must have been struck by the resemblance between Sparta’s lawgiver and Br’er Rabbit. At least I was, last night. 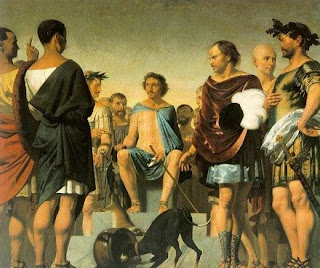 In Kautsky’s book on Thomas More’s Utopia, he listed Lycurgus as a fore-runner of socialism. Kautsky said nothing about Brer Rabbit, however. Lycurgus got on the short list because, as Plutarch’s life shows, he imposed an apparently radically egalitarian ideal on the Spartans. Save, of course, for the helots. Myself, I think it is important to see this ideal for what it is: it is animated less by egalitarianism than for a hatred of the effects of wealth.

However, to continue along the traditional lines of telling the story: Lycurgus did create an egalitarian state. The way he did it was Brer Rabbit like. For instance, here is Lycurgus, solving the perennial problem of wealth inequality. First, he solved it for immovables (Henry Maine claims that the primal category of property is into immovables and moveables) by creating a new, equal division of land between all Spartans and all Laconians.

Then he moved onto moveables.

“Not contented with this, he resolved to make a division of their movables too, that there might be no odious distinction or inequality left amongst them; but finding that it would be very dangerous to go about it openly, he took another course…”

In order, Plutarch claims, to complete his radical egalitarian program, Lycurgus had to attack both the possessions and the private life of the Spartans. The first he did in the following way:

“… he commanded that all gold and silver coin should be called in, and that only a sort of money made of iron should be current, a great weight and quantity of which was but very little worth; so that to lay up twenty or thirty pounds there was required a pretty large closet, and, to remove it, nothing less than a yoke of oxen. With the diffusion of this money, at once a number of vices were banished from LacedÃ¦mon; for who would rob another of such a coin? Who would unjustly detain or take by force, or accept as a bribe, a thing which it was not easy to hide, nor a credit to have, nor indeed of any use to cut in pieces? For when it was just red hot, they quenched it in vinegar, and by that means spoilt it, and made it almost incapable of being worked.
In the next place, he declared an outlawry of all needless and superfluous arts; but here he might almost have spared his proclamation; for they of themselves would have gone after the gold and silver, the money which remained being not so proper payment for curious work; for, being of iron, it was scarcely portable, neither, if they should take the pains to export it, would it pass amongst the other Greeks, who ridiculed it. So there was now no more means of purchasing foreign goods and small wares; merchants sent no shiploads into Laconian ports; no rhetoric-master, no itinerant fortune-teller, no harlot-monger or gold or silversmith, engraver, or jeweler, set foot in a country which had no money; so that luxury, deprived little by little of that which fed and fomented it, wasted to nothing, and died away of itself.”

What Lycurgus is aiming at is luxury –luxury is the vice of inequality, the effect of wealth, the thing that brings in itinerant fortune-tellers, harlot mongers and gold and silver smiths. The attack on wealth is an attack on the effect of wealth. And though it seems to be an attack levied for the sake of equality itself, it turns out that it is a way of clearing out unnatural hierarchies so that natural ones can flourish. The natural ones will be of the healthy and the strong over the weak – the good fuckers and good bearers of children over the degenerates – the silent, or plain speakers over the garrulous – the spending of words being parallel to the spending of money – etc.