controversial opinions: if Julius and Ethel Rosenberg were guilty, they are heroes 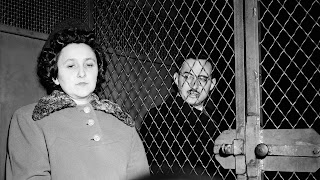 John Quiggins at Crooked Timber published a post last week about controversial opinions. He describes tweeting two of his controversial opinions, to see what response he would get. The two opinions are: there should have been more nuclear power plants built over the last 50 years, and less coal used; and two, world war 1 was a useless waste of life.

Although I disagree with one, as Quiggins presents it, and agree with two, both of these opinions do not seem that far off the track.

I have an opinion that is further off the track, I think. I think that if Julius and Ethel Rosenberg really did steal the "secret" of the atom bomb for the Soviets, then the world should name a holiday for them. That was one of the most humanitarian acts of the twentieth century.

I'd backup my argument by saying: the U.S. showed an incredible moral blindness, or perhaps immorality, with its turn from the thirties - when the official American position decried bombing civilians as a war crime - to the forties - when it made bombing civilians a pillar of its military strategy, up to and including the bombing of Hiroshima and Nagasaki. Further, as the Korean war shows, unlimited targeting of civilians through airpower was the standard operating procedure for the American military.

Given that mindset, if the U.S. had the monopoly of the atom bomb for another decade, it is probable they would have used it, perhaps extensively, against the Soviets, China, and perhaps in Korea. We would be living in a pretty awful world right now.

So, god bless Julius and Ethel Rosenberg. Or Julius - even the crank right that has howled about how Julius was guilty throws in a crumb that yeah, frying Ethel was a little overthetop, seeing as she was innocent. But you gotta break some eggs to make an omelette. And now, onto condeming moral relativism!