A ticklish situtation: me and clever Hans 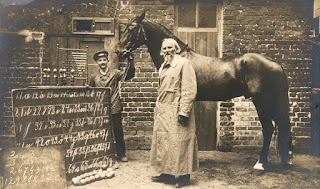 “A well regarded psychologist once wrote down the proposition: ... for the animals are not capable of smiling and laughing.” – Robert Musil, Can a horse laugh?

When I was a kid, I was subject to a peculiar syndrome. Kids all laugh, of course – or at least this is true in the normal course of events, social and neurological. And I laughed, too. But unlike most of my friends, I was sometimes truly overcome by laughter. A joke, or something that I found funny, if nobody else did, would sometimes set off an almost epileptic series of laughs. I would begin to choke on laughing, and then that I was laughing and choking would itself seem funny. Soon I was panting between laughs, crying, walking around, rolling on the floor. I could not stop myself. Every time I did, every time I was able to make myself pause, something would happen – my parents or my friends would say something, or I would, fatally, think something – and I’d be off again. This didn’t happen all of the time, thank God, but it happened enough that I got a reputation for being an easy laugher. My friends, sometimes to target me, in a teasing way, would tell me a joke at the wrong time – like when I was drinking milk in the school cafeteria – which would have a disastrous effect on me.

Over the years, I stopped having these fits of laughter – for the most part. I have had them a few times since I got married. For instance, last night. We were playing a dice tic tac toe game with Adam. And arguing about rules. Games are fun, but arguing about rules is divine. I’ve always thought, which is why few people volunteer to play games with me. Anyway, one thing led to another and that we were arguing about the O or the X seemed funny to me, and then funnier, and then the funniest thing that ever happened, and I could not stop laughing. Luckily, I was not eating. This went on for five to ten minutes, alarming my wife and delighting Adam.

Perhaps I was laughing at the whole year.

In the Posthumous Papers of a Living Author, Robert Musil collected a lot of his ephemera – and Musil’s ephemera is worth the collected works of most authors. One of the essays is about a laughter and the beast – the beast in question being a horse. This was in the days before World War I – “since the war, horses have stopped laughing”.  According to Musil’s biographer, Corino, in August 1913 Robert and his wife, Martha, took their honeymoon in Italy. The countryside was very close to Rome at that date – Italy was where Europeans from France and Germany went to enjoy a vacation from modernity, which of course made all the Italian futurists spit. The horse in question was a workhorse – no pony, and no battle or police horse, but a fine young beast on a fine sunny day. Musil observes that horses, who have four “shoulders” and so four armpits, are approximately twice as susceptible as human beings to being tickled in these vital areas. A boy was petting the horse, “... this horse seemed to have a particularly sensitive spot on the innerside of the shoulder, and everytime when it was touched there, it could not keep from laughing.”

The boy, of course, decided to stroke it just there with the grooming comb, and predictably the horse tried to get out of being tickled: it wiggled away, and it tried to butt the boy away with i “its nose, but it was no use.

I recognize this tickle situation – who doesn’t? “And when he came close to the armpit with the comb, the horse could no longer stand it: he turned on his legs, his whole body shuddered and he drew his lips back from his teeth, as far as he could. He acted, for several seconds, exactly as a person does who one tickles so much that he can no longer laugh.”

The mysterious connection between the tickle and the laugh – the pleasant torture of the whole thing – is a strong element in our natural histories, I think. It extends from sex, with its masochistic properties,  to the whole general humor that makes up “being happy” or “being unhappy.”

p.s. Musil, according to Corino, was a school friend of the psychologist Oskar Pfungst, best known for his work on “clever Hans”, a horse who could supposedly add numbers and distinguish colors. Pfungst showed that Hans were really just responding to unconscious signs made by his owner – which, in my opinion, is much more impressive than adding up 2 plus 2, although it leads only to Houyhnhnm sociability instead of accounting.