the stub principle: there has never been a Truth era 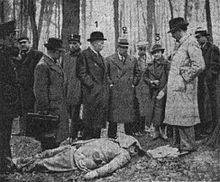 We are not living in a post-Truth era, for the simple reason that we have never, ever lived in a Truth era.
We are living in the era of data availability. For instance, I don’t know whether it has quite been realized in the social sciences that when archives and libraries throw unimaginable masses of texts – books, newspapers magazines - on line, and subject them to the search engine, we have a very interesting means of catching the way histories have been written – and have overwritten troubling details. I’ve been working on a non-fiction/fiction story about the assassination of Dmitri Navachine, a minor figure, cut down in 1937 in Paris. And I’m seeing how from the get go the assassination was lied about, Navachine was lied about, specific parts of the whole scene were taled and re-taled like some chromosomal code gone awry, with mutations galore, and how this seeped into almost every historical account of the 30s in France written by historians, many of them Anglophones. Navachine is supposed to be part of a series of the minor lives of the Cold War – I’ve already written about X, a real figure whose murder was solved, but never prosecuted. Navachine is a variation on this theme. The one and only certainty I go by is the stub principle. Stub was the word introduced by William Gibson to designate alternative time tracks – pasts that don’t converge on one canonical past. The reviewers all reference multi-universe theory and what have you, when they could just reference our common past, our twentieth century past, where stubs proliferate. The thirties were an intense time – a low decade, as Auden put it – as compared to, say, the fifties. Or so it might seem looking back. But once you dive into the huge datapile that the internet has made available, you find out that it is stubs all the way down.
I suppose the hope is that at some point, the violence leaks out: that the I – you relationship is re-established. In Lucretian terms, ultimately love rules the universe. I think that is in fact a better account than one that relies on the truth. The truth is a cold thing, as cold as a clue, while love is an organic thing, and warmth is not just its milieu but its essence. We can’t live in a truth era, ever; we can’t suppress the stub principle. The dream should not be everybody agreeing on one canonical version of the world, but rather, a polis in which the citizen is taught to sublimate the violence inherent to their stub – to live in it with the appropriate humor.
IMO, as the kids text.
at November 17, 2020