The police function in a system that reaches beyond the police. 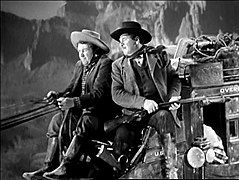 Cast your mind back to every Western you have ever seen. Most of them, I’d bet, featured or included a sheriff. The sheriff “kept the peace” but, if you think about it, never stopped a single wagon, carriage or horserider for speeding. Consequently, the sheriff never examined a single wagon, carriage or saddle bag for “contrabrand” material.
In Sara Seo’s Policing the Open Road, the burden of the narrative is on  the legal construction that allowed police, around the Prohibition era, more power over the car than the Customs officer had over the incoming ship – that is, police were allowed to make reasonable searches of vehicles without a warrant, and with the standard of “reasonableness” amounting to: what the policeman says.
The interesting subtheme, here, is that policing followed technological and legal changes, which intersected with an already existing hierarchy that separated the respectable (white) people and the non-respectable (working class, black, immigrant) people.
“Certainly, traffic laws, like prohibition laws, established mala prohibita—acts that were wrong only by virtue of statute. No inherent sense of morality deemed, for example, driving at the speed of twenty-two miles per hour a per se evil like murder or theft.”
Prohibition and the policing of the automobile came together in court cases that started to allow a growing police force a greatly expanded amount of power not only to regulate the traffic, but to search cars on the instinct of the police.
The addition of police union power beginning with the Civil Rights era added to this police power. Even so, the police would not have become the community’s ruler instead of their servant if the political power of the unions had not been flexed to take the power directly away from local law.
A good example of how the system works is found in Ohio.

On  August 12, 2017. 25-year-old Richard Hubbard III was pulled over on E 228th St. just before 10:30 a.m. for "a moving/traffic violation” by Michael Amiott. “Hubbard was ordered to exit the car and face away so he could be taken into custody. Police say Hubbard refused, and a violent struggle ensued. The video that was captured showed Amiott taking Hubbard to the ground, punching him multiple times.”

Thus far, a typical instance of the combo of race – Hubbard is black – the auto – Hubbard had committed a minor traffic infraction and had an expired license – and police authority – the taking into custody of a person without a licence is extraordinary. I speak from authority, having once been stopped by a policeman for a minor traffic infraction and then being told that I would get a major fine if I didn’t renew my license, which was out of date. At no point did the white policeman think that I was going to go down with him to the police station. Cause I’m white.
The video made Amiott’s action undeniable, although the police issued the standard pr piece about how Hubbard had violently resisted. It did not explain why Hubbard was taken into custody – this was, for the police, a simple norm. They get to decide who to take into custody. That power has been given to them when they were given untrammeled power over the streets.

In the next step in this drama, the town of Euclid reluctantly responded by suspending and then firing Michael Amiott. The mayor referenced further instances in Amiott’s record. Amiott’s case was then taken up by the Fraternal Order of Police, even though the Euclid police department is represented, technically, by another union. See this site for an indepth look at Euclid policing and race, including other violent incidences involving Amiott. (see all parts of Series 3)

In 1983, Ohio – like many Midwestern states with a strong union presence – instituted a  collective bargaining law that outlawed strikes in favor of arbitration. The driver, at that time, was the fear of teacher strikes. But included in that law were all public employee unions – the police unions foremost.

Ohio was once the heartland of American industry, and consequently, of the factory worker unions that allowed the working class to negotiate with Capital. Some leftist economists have pointed to the benefits accruing to public employees from these laws. At the same time, there is a difference between teachers and cops – the arbitrators and judges have myriad links with the police.
A study by Mark Iris in 1998 of arbitration results in Chicago bears out the bias:
“A total of 328 disciplinary actions were decided by binding arbitration during that period [1990-1993]. In addition, under a new process started in July 1993, 205 disciplinary actions have been reviewed by arbitrators for nonbinding advisory opinions as of July 1995. These two distinct data sets demonstrate remarkably similar patterns of outcomes; collectively, the discipline imposed upon Chicago police officers is routinely cut in half by arbitrators. This pattern recurs despite an elaborate, lengthy review process and close scrutiny before the suspension of an officer is ordered.”
This result should not surprise us, given the larger history outlined by Seo: the abdication of a large degree of sovereignty to the police. In a 2016 article by Tylor Adams,  “Factors in Police Misconduct Arbitration Outcomes: What Does It Take to Fire a Bad Cop?”, he summarizes other studies that show the same interventionist tendency. Although police chief, mayors, and the community may want Michael Amiott fired, he does not work at the will of the community: his fate depends on his union and his arbitrator.
Adams remarks that the reason for overturning suspension or firing is most often categorized as a Just cause mistake. “A principal reason why arbitrators overturn police discharges is a department's failure to prove just cause. The meaning of just cause is derived from principles of fundamental fairness that evolved over time through the decisions of arbitrators.” Adams does not question the circularity of this “evolution” through time: a biased system will become more and more biased as precedent is set.

What does this mean? It means that we are depending on the “reasonableness” of cops and the precedents set by police-biased arbitrators. It means that the community needs to take back power. If we dismantle the way the police operate, we have to dismantle  and clean up the system of arbitration that is broken. A simple but effective tool is to take away the “just cause” rationality from arbitrators, and have the legislature spell out very what just cause is. I would think that process would weed out bias from racial and gender causes that might make a mayor fire a police officer;  but it would not allow police judgment about the appropriate use of force to triumph over the community.