The car and the police state - 1 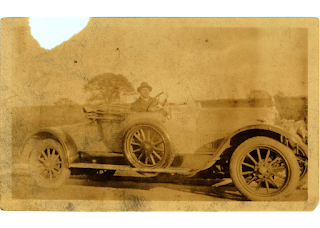 Sara E. Seo bookends her book, Policing the Road: How cars transformed American Freedom (https://www.hup.harvard.edu/catalog.php?isbn=9780674980860 ) between two cases. In one case, Wiley v. State (1916), a Police officer in a car – an unmarked car, as police cars weren’t “marked” until the 1940s – named Wiley called out to a car speeding by to stop. He and the police with him suspected that the car was speeding from a robbery. So, with instincts echoed by every officer related shooting since, they trained their guns on the car and shot it up, killing the passenger, a Mrs. Bates. The court decision in this case went against the police:
“In the case of Wiley v. State, which affirmed the guilt of Deputy Sheriff Johns, whose shot had killed Mrs. Bates, the Arizona Supreme Court maintained that even if the Bateses had heard the shouts and refused to stop, the officers’ manner of pursuit “was more suggestive of a holdup by highwaymen than an arrest by peace officers.”
At the other end of Seo’s history is the case of Sandra Bland, an African-American woman who was stopped because she failed to use a turn signal. From the moment the policeman pulled her over to the moment three days later when she supposedly hung herself in a cell, is the American nightmare that we see all around us.
Seo notices something crucial about Sandra Bland’s life:
The automobile appeared in nearly every significant setback in Bland’s life. Exorbitant traffic tickets that Bland paid for by “sitting out” in jail. Convictions for driving under the influence and arrest warrants for unpaid traffic fines that severely limited her employment options. Charges for possessing marijuana—her lawyer suspected that Bland was self-medicating—that the police discovered in her car.”
How did we go from Wiley v. State to Sandra Bland?
Seo’s story is not only focused on racism and the police, but more generally on how overpolicing and the automobile form a dyad in the United States. It is a topic that cries out for a Ballardian and/or Deleuzian treatment, but Seo remains a calm positivist about it all. Wondrously enough, her thesis has, I think, never really been explored in depth:
"Before cars, American police had more in common with their eighteenth-century forebears than with their twentieth-century successors. What revolutionized policing was a technological innovation that would come to define the new century. This is, therefore, a history about policing cars and, thus, about policing American society as it fast became an automotive society. It is thus also about the practical, theoretical, and legal problems of policing everybody who drove. "
To put this in a crude way that Seo herself would not countenance, the rise of the cop as overseer of traffic spelled the downfall of the 4th amendment to the constitution – the one about unreasonable searches and seizures. The one about having to have warrants. The fourth amendment never applied to slaves, whose own limited travels in the South were overseen by Slave Patrols. The Slave patrols, as Jim Crow kicked in with a vengeance at the turn of the century, were represented, mainly, by legislation degrading African-Americans on public transportation – the kind of legislation later copied by the Nazis and applied to Jews in Germany. The automobile appeared as, at first, a challenge to this.
W.E.B. Dubois, for instance, was an ardent car driver. He was proud of his cars. Since he traveled extensively in the South, being in a car kept him out of the reach of the Jim Crow laws attendant on trains and buses. Although as the history of police – and mob – interactions with black drivers shows, the Slave Patrol system was not that easy to slip.
Seo’s book – which everybody should read – overturns an old intellectual history of jurisprudence that attributes to the Warren court the new enforcement of prohibitions on police abuse – a new national standard for all states concerning the fourth amendment – by showing that the courts, in reality, were instrumental throughout the twentieth century in increasing police power, based in “reasonable” standards of policing automobiles that increasingly made the cops the judge of when and when not to search, when and when not to stop – basically giving them unlimited powers of harassment. And it is a pretty simple matter to see that in an unequal society, the people who would bear the brunt of harassment would be those who were people of color, those who were poorer, those who the respectable – the white bourgeoisie – were most afraid of.
at June 22, 2020