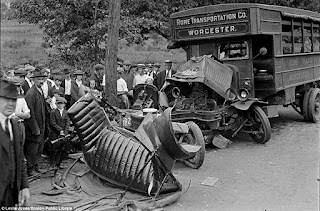 The analogies between the UK election and the upcoming American one remind me of the analogies that used to be tossed around in 2003 between occupying Germany after ww2 and occupying Iraq. They are analogies that simply ignore all the salient factors. In the UK, there is a genuine grievance among Labour's working class constituency about how the EU works, which led to Labour having the impossible task of trying to straddle a fundamental issue, becoming a house divided against itself, running against a flamingo fascist who had been in office all of two months by having to run on the flamingo fascist's chief issue.
In the U.S., on the other hand, there is no Brexit. There is an impeachment that lays out Trump's corruption, which - destined to defeat in the Senate - can provide delightful issues to hammer the Republicans indefinitely. There's the fact that, after four years in office, Trump appeals, massively, to Republicans, and not very much or at all to anybody else. Bush was re-elected with a very respectable 35 percent Hispanic vote, according to exit polls. I doubt Trump gets 20. The local elections earlier this year prefigured Labour's massive defeat, while the local elections this year are a clear signal that the electorate is riled up, and will vote against the Dems - as happened in the Governors' races in KY and LA, and in the Democratic triumph in Virginia, among other races.
The elites in the press have long turned into neolib fanboys. Culturally, this means they really, really despise workers. And fear them - this is a meme that goes way back in the history of capitalism. The neolib trick is to try to meld together, say, LBGT issues and NAFTA, or an economic policy favoring the plutocrats in all things with a cultural shift to the "left" allowing trans-"transgressive" artists space in the Style section. It turns favored marginals into entertainment objects which are mulled over by the kinds of people that worry, otherwise, that the Democrats are getting too "radical". In France, the same chemistry is at work - the "deuxieme" gauche, which isn't gauche at all - the type of "lefties" who accepted minister positions with Sarkozy and now fight to please Macron - has broadly the same op-ed beliefs.
Anyway, given the media peeps that try to "run" the narrative in America (all singing the same, Trump is uniquely awful real Americans love him! song), the Johnson analogy will come out heavily over the next media cycle, but I don't think it will make too much of a difference. The disconnect between the political establishment and the grassroots in both parties is deep and getting deeper. My advice: don't believe the hype!

Here's what I wrote in November, 2003
Historical analogies cannot take the place of historical analysis - Leon Trotsky
Jay Bergman, in an fascinating article on Trotsky published two decades ago in the Journal of the History of Ideas, noted Trotsky's borrowing of terms and phrases from the French revolution, and the way the neurotic recapitulation of this reference misshaped and ultimately falsified his analysis of Stalin. It is Bergman's thesis that one of the intellectual causes of Trotsky's failure on the level of practical politics was his habit of casting the contemporary history in terms of the French Revolution. Marx had already mocked the French revolutionists habit of clothing their every act in the language of Republican Rome, as if they could exchange their button up trousers for togas. Bergman has some fun in showing how the scare-word 'Thermidor' was thrown around in the early years of the Russian Revolution. The Mensheviks, in exile, poked at Lenin's NEP as a pernicious backsliding to capitalist norms. For them, here's the proof that Bolshevism was descending into its Thermidor. When Trotsky was still close to the center of power, he dismissed the analogy out of hand. However, once he was clawed out of the center of power, the old black magic of analogy appealed to his mind like that last pipeful to a pothead. Suddenly, the the Thermidor analogy seemed golden. This was a product of the fateful historical experience of the counter-revolution, i.e. Trotsky's being kicked out on his can, in the Soviet Union. One should always ask, when an historical analogy is offered, who benefits -- for usually it aggrandizes the image of its maker in some way. In any case, as out of Thermidor grew the context in which Napoleon emerged, so too, in Russia, out of the counter-revolutionary bureaucratic forces within the Bolshevik party grew the context in which the Soviet Bonaparte, Stalin, emerged.
There are serious problems with treating Stalin as a species of Bonaparte. Stalin himself thought he was a species of Ivan the Terrible. What is most interesting about the analogy, perhaps, is that both Bonaparte and Stalin came from peripheral cultural zones - Corsica and Georgia - to dominate the hegemonic center. So did Hitler, for that matter. But such insights into historical states of affairs afforded by analogies have to shuck off the analogic form in order to become serious. In other words, suggestion has to cede to hypothesis, and hypotheses are brutal.
Bergman is damningly succinct about Trotsky's problem.
"Trotsky, desperately seeking for something from the past that would make sense of the present and promise vindication in the future, failed to recognize (except on rare occasions) that historical analogies, especially inappropriate ones, can often obscure more than they clarify, particularly when the object of one's analysis - in Trotsky's case, Stalinism - proves to be far more rooted in a nation's history and culture than any transnational comparison or analogy might suggest. Indeed, the categories Trotsky borrowed from the French Revolution - Jacobinism, Thermidor and Bonapartism - were too much the product of one historical epoch and national history to be useful in explaining, or even in helping to explain, the evolution of another."
Given the way in which analogies are usually imperfect or completely fallacious guides to the future, their use as a justification for strategic choices is where the metal hits the road and buckles, crashing the plane into the schoolbus. Bremer, in Iraq, famously disbanded the Iraqi military under the premise that it was exactly like the occupation authorities in Germany disbanding the Nazi army. The insanity of this kind of justification will, I am sure, run rampant in the shop offices of the D.C. election consulting firms. We'll see what Democratic candidate suddenly decides to revamp according to the formula that Trump, like Johnson, is the heavy favorite.

your second paragraph - you write Dems but you mean Rethuglicans

these are just typos - in terms of your analysis i think you are correct - i have given money to bernie this time as well as last even though i feel a pessimism of the intellect - as yogi berra might have said, you never know when something surprising might happen

A comment! It has been years since I've seen a comment. I had resigned myself to broadcasting to a void. And I used to get so many, comments that is.

I don't have much pessimism regarding Trump's defeat. I mean, he can still pull it out, being the incumbent and all, but not since Jimmy Carter has there been a president who so visibly was treading water going into the big one. It wouldn't surprise me if Georgia and Arizona went into the D column, and MI WI and PA look very good for the dems (if you disregard the Firehouse strategies poll - which the media reports barefaced, without noting that they are an explicitly Republican outfit, and are as accurate as a broken barometer). I had high hopes for Warren, and still wonder if she can pull out of her dive - but if not, Sanders is looking stronger and stronger. Who knows, not me. Still, I think there is a liberal freakout about Trump that I've personally witnessed - and which has made me think that some very white affluent liberals only know other white affluent people. Cause he isn't an all powerful dr evil, but an inefficient R prez who is damn lucky to have McConnell as his impressario.