The real in (and out of) realism 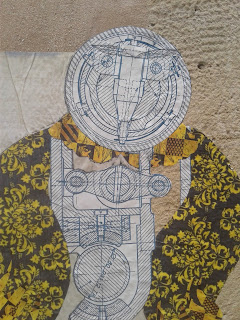 If things are in the saddle and ride mankind, as Emerson said, then let us imagine that things take a break every now and then and let words ride.  It is a 30 – 70 split, perhaps, is what I am getting at. This being so, it is foolish to argue with a word once it has established a claim on mankind.
In fact, this is just the kind of foolishness that philosophers – who at one time acknowledged themselves to be half-fool, although now they more often consider themselves to be half-scientist, a half and half creature that to me is still fool – like to engage in. Thus, I, in my half a fool robes, have always had a steady dislike for the word “real” and its court favorite, “realism”.
Here’s my reasoning. If real is meant to refer to the constitution of reality, then, in my opinion, it can’t go picking out some bits of reality and discarding others. It must be wholly promiscuous, rather than half chaste. It must include magic, dreams, mirages and perceptions as well as carpenters crowns, heaps and pi. In other words, I take real to make the widest of ontological claims. However, in actual use, real has been turned into an ontological grift, setting itself up as something ontologicallly direct as opposed to all those soft ontologically indirect objects. In this way, the real becomes a metaphysical con man, a dealer of three card monte.  The dream, the magic, the realist wants to say, are dependent on  a subjective privilege that takes us out of the real and into the ideal, or the fantastic, or the superstitious – they aren’t “validated” by Science, an institution that is suddenly thrust upon us as our commission of the real.
Here we spot everyday dualism, doing its silent work. And everyday dualism has its advantages, or it wouldn’t hang around. But those advantages, which prime it for everyday distinctions, don’t prime it for metaphysical argument. There, it forgets its place. It rubs up against its own original quantitative claim – that reality is all, whereas non-reality is nothing – and  can only help itself out of its dilemma by silently inserting assumption into the discussion that , indeed, must be discussed before we can have the discussion.
In my opinion, realism is only plausibility writ large: it is a view on what is possible and important that gains its justification from a certain class background. The real itself shouldn’t generate an ideology, an ism, any more than the toe does. Like the toe, the real is simply there, the very thereness of there. But this view of the real, which genuflects to its ontological capaciousness, doesn’t correspond to its social meaning – which is always pulled into the dualism between the human and everything else. Aristotle, in the Topics, speaks of endoxa – credible opinions – that are “accepted by everyone or by the majority or by the wise”. This is the filter through which reality becomes realism. The privileged point of view is given us by the class system in the regime in which that point of view is expressed. The reputable class bears various names, depending on the regime we are talking about, whether it is the middle class in America, or public opinion, or most scientists, or – more commonly – an implied everybody who counts that lurks behind a passive construction (“as is well known,” “as is generally agreed”, etc.). Realism’s affiliation with plausibility, rather than reality, is the secret of why the term seems so indeterminate, when you come to close quarters with it.
This is not simply a matter of aesthetics. It is a matter of ordinary problems. To say that insanity is “real” is one thing, to say that insane ideations are “real” is another thing. This is the whole pragmatics of real, as opposed to its semantic promise – which would leave distinctions of what is natural, plausible, objective, communally accessible, all that, to other words and phases of society and perspectives. The whole discipline of psychology is folded over this problem, with one side contending that “talk therapy” – however that is filled out – doesn’t treat mental problems as “real”, that is, based on the neurochemistry of the brain, which is supposed to be a realer real than talk about our relations, say, in families, in sex, etc. It is not clear why the family is less real than the neuron – the idea is, probably, that the mental problem would express itself in some person regardless of whether that person grew up in family x or y – although, confusingly, the same scientific ideology hold in high regard the gene, which brings us back to social realities that mediate any sex act. It is very hard to understand how a neurochemical problem in the human brain, which evolved in a social animal – as opposed to, say, an aardvark – would articulate itself at all without having strong social links, having ties to sensemaking as the natural activity of the human animal.
The same bend, but with other variables, is found in physics, with the realists versus the Copenhagen interpretation, and may the best physicist win (that is, get the contract to write a pop sci book agented by John Brockman).
The rest is at Willetts.
at October 16, 2019