Anna Burns' Milkman and the Role of Proper names in all histories, sacred or profane 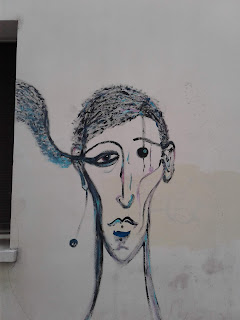 Burns begins her novel with an utter spoiler of a sentence that pretty much states the case:

The day Somebody McSomebody put a gun to my breast and called me a cat and threatened to shoot me was the same day the milkman died. He had been shot by one of the state hit squads and I did not care about the shooting of this man.

Fleshed out, this means that the novel follows a parallel between the events that befall the narrator as she is sexually stalked by a reputed IRA honcho and the events that have befallen Belfast itself in the years of the “troubles”, especially in her Ardoyne neighborhood in Belfast, which is Catholic and working class.  But here I run into a wee problem, because even if I could sum up the book like this, I would have to admit the fact that nowhere does the book mention Belfast or Northern Ireland or the British or  the IRA. All those names are blocked, all those names are not here. Somebody McSomebody is here, but his name is not here. The milkman is here, but his name, at least so far as the narrator knows at this point, is not here. As we will soon discover, the narrator’s name is not here either. This is not a minor detail, this is not something we can read over, if we want to read. So our first order of business to ask the question: why have the names fallen off the map of the territory covered in this novel? Why does Burns give herself the difficult task of creating a story out of a seeming  bonfire of proper names?
To answer this question in part, back up for a moment – consider  the role of the proper name in all histories, sacred or profane. The proper name seems to be unique to human communication, although who knows what goes on among dolphins. Presumably at some point they were invented, just as making fire was invented. One could even say the human comes about with the proper name. Tarzan, even, seems to have a sense of proper names – because if he didn’t, the whole me Tarzan – you Jane schtick wouldn’t make sense. You might be able to train your dog to respond to the sound of its name, but your dog is never going to use or mention your name, or even in the cells of its poochy consciousness think of you with relation to your proper name. All of which makes proper names fascinating to the philosopher, because what is going on here? Why do we need names?
Anna Burns narrator is called variously “middle sister”, “maybe-girlfriend,” “daughter”, etc. Her friends and relatives are similarly dubbed by what Bertrand Russell called “denoting phrases” – and even those with proper names, we quickly learn, don’t bear real proper names, but names denoting the fact that they seem like the type of person who might bear a particular kind of proper name – for example, something very English sounding. Except that, to continue with this and show what semantic quicksand lies within the story of Burns’s novel so that the reader, as well as the characters within the novel, never know whether the next step is going to completely suck them down, Britain and England are not dubbed with their proper names either – they are invariably “over the water” or “the state”. And even Ireland or Northern Ireland or Belfast is not dubbed with its proper name, so that it becomes a linguistic shift – a “here”, a “there”, a “this side of the street”, a “region”, an “our community” and “their community”, gaining its semantic sense from the speakers position within a semantic web (which is technically known in linguistics as a shifter). So for instance when we read that a couple who lives near the narrator’s “maybe-boyfriend” is named Nigel and Jason, we are not to think that they are “really” named Nigel and Jason. The reason that they are named Nigel and Jason is that they have been collecting, for anthropological reasons, names that were “banned” in the “community” – itself unnamed, but obviously the Catholic side of Northern Ireland – which is such a peculiar thing to do that it seems like the kind of thing people over the water might do, and over the water, as is well known, Nigel and Jason are common first names.  Maybe-girlfriend raps out a list of illegitimate names:

The banned names were: Nigel, Jason, Jasper, Lance, Percival, Wilbur, Wilfred, Peregrine, Norman, Alf, Reginald, Cedric, Ernest, George, Harvey, Arnold, Wilberine, Tristram, Clive, Eustace, Auberon, Felix, Peverill, Winston, Godfrey, Hector, with Hubert, a cousin of Hector, also not allowed. Nor was Lambert or Lawrence or Howard or the other Laurence or Lionel or Randolph because Randolph was like Cyril which was like Lamont which was like Meredith, Harold, Algernon and Beverley. Myles too, was not allowed. Nor was Evelyn, or Ivor, or Mortimer, or Keith, or Rodney or Roger or Earl of Rupert or Willard or Simon or Sir Mary or Zebedee or Quentin, though maybe now Quentin owing to the filmmaker making good in America that time. Or Albert. Or Troy. Or Barclay. Or Eric. Or Marcus. Or Sefton. Or Marmaduke. Or Greville. Or Edgar because all those names were not allowed. Clifford was another name not allowed. Lesley wasn’t either. Peverill was banned twice.

“The banned names were understood to have become infused with the energy, the power of history, the age-old conflict, enjoinments and resisted impositions as laid down long ago in this county by that country, with the original nationality of the name not now in the running at all.”

We are only really beginning with the politics of the name, however, when we enumerate which names are and are not allowed, and which gender’s names are politically charged and which one’s are not, for the levels of non-naming are multifold and the the quicksand is deep. It is not simply in the “community” that the name has become a fatal object of conflict: even in the narrator’s own family, names have been stripped off, torn out, left unvocalized. The process was started, paradoxically, by the paterfamilias, the usual legal guardian and carrier of the name, the male namer whose family name is carried by the son and the daughter, who in this case – as in so many in his domestic life – flips the role, becoming the unnamer even as he is, himself, unnamed, abandoning our primogenitor Adam’s perogative in the name business. Which is the point at which we hit our own family unnames, such as Mom and Dad, which are the ultimate psychoanalytically charged shifters since my correct use of “Mom”, for instance, is directed towards a woman who bears another, legal name, and can’t be arbitrarily transferred to other women who have not either borne me or exist as my step-mother.  Except in cases where for one reason or another a woman has become a “Mom” to people outside of the legal and/or biological relationship of motherhood, which is an exception that proves the rule that the rules all have exceptions in a language, as language is, among other things, a huge swap meet.
But to return to middle sister’s Da:

He saw me though, even if unsure which daughter I was. That, of course, could have had nothing to do with dying, because da, when he’d lived, always had been in a state of distraction, spending overlong hours reading papers, watching the news, ears to radios, out in the street, taking in, then talking out, the latest political strife with likeminded neighbours. He was that type, the type who let nothing in except it had to be the political problems. If not the political problems – then any war, anywhere, any predator, any victim. He’d spend lots of time too, with these neighbours who were of the exact fixation and boxed-off aberration as him. As for the names of us offspring, never could he remember them, not without running through a chronological list in his head. While doing this, he’d include his sons’ names even if searching for the name of a daughter. And vice versa. Sooner or later, by running through, he’d hit on the correct one at last. Even that though, became too much and so, after a bit, he dropped the mental catalogue, opting instead for ‘son’ or ‘daughter’ which was easier. And he was right. It was easier which was how the rest of us came to substitute ‘brother’ and ‘sister’ and so on ourselves.