Marx and vulgarity, take one 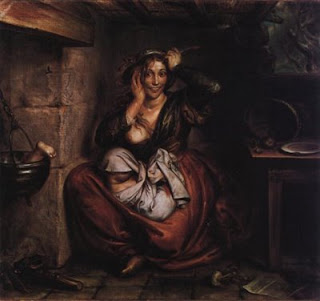 “They ought to take this Kant and give him a three year stretch in Solovki for such proofs! Ivan Nikolaevich plumped quite unexpectedly.”

One problem with trying to deal with Marx in a blog, or in the fragment form of my The Human Limit, is that Marx is a whale and LI, by design and ability, through all possible worlds, is a minnow. Thus, my analysis of Marx takes on the appearance of a conjuring act, similar to Houdini’s legendary trick of making an elephant vanish. A trick which may never have happened, and has certainly never been explained to any magician’s complete satisfaction. The minnow shall, in one tremendous bite, eat the whale, ladies and gentlemen. As a proof positive, we will then x ray the minnow, and you will be able to discern the whale’s peculiar skeleton within its sad little stomach.

So then, to return to the rules of this thread, the goal, here, is to shine a light on Marx’s idea of the romantic viewpoint. He puts it in terms of a nostalgia, of sorts, for the universal individual, the complete human, the Goethe, the Leonardo. In conjuring up this ideal, it posits itself, necessarily, as critical of the bourgeois viewpoint – which wears the complete human down to a useable stub, like a number two pencil. The well rounded individual becomes an Andrew Carnegie at best, a sage of money. Yet these two viewpoints, Marx says, are always linked together, always accompany each other. We’ve taken long hard looks at these adventure stories before – these comedies of the sage and buffoon, the Don Juan and the Sganarelle, Bruno’s asinine wisdom and the infinity of worlds. Are these viewpoints, as Marx calls them, transformations in this series, or something new?

That, at least, was one of the questions we wanted to answer – although the rules of the game require that all answers be posed with the fine irony that slips between the true and the believable.

But speaking of vulgarity – wasn’t I speaking of vulgarity? Yes, I believe I was. Well, as I said to Marx that spring in London, I am not at all sure of that sticking universal history into these notebooks in bits and pieces is the way to go about it. But I’m becoming more convinced, as the centuries wear on, that there is a method in the madness – and that method is precisely the finest form of madness, the flower, so to speak, of dementia. There is a minnow in the whale, there is a midget chessmaster in the Turk, there is, if not a theologian, still an alchemist, a treasure seeker, and Catherine the Great’s shaman behind the curtain of dialectical materialism. Or have I gone too far here?

Anyway, here’s a bit I want to deal with next. In his notebooks, Marx is using a vocabulary that he has already tried out in his political writings; this sets up a field between them of conceptual and semiotic turns; in particular, one feels that the Eighteenth Brumaire of Louis Napoleon breaths down the neck of Marx’s universal history in the Grundrisse. As, for instance, here, in which Marx, with the secret arrogance of a man who understands, on one level, the fallen nobility and fierce regret of the reactionary writers (if on another level he pours contempt on their nostalgia for the irrevocable and the consequent imprecision and mystification that envelops the past from which they have been expelled), sussing out the origin of the peculiar vulgarity of the bourgeois lifestyle. Marx, as we have emphasized, borrows Hegel’s dialectic and infuses it with the Wiccan insight that backward is not merely forward subtracted, but an entrance into the Night, that other order:

“Now, wealth is on one side a thing, realized in things, material products, which a human being confronts as subject; on the other side, as value, wealth is merely command over alien labour not with the aim of ruling, but with the aim of private consumption etc. It appears in all forms in the shape of a thing, be it an object or be it a relation mediated through the object, which is external and accidental to the individual. Thus the old view, in which the human being appears as the aim of production, regardless of his limited national, religious, political character, seems to be very lofty when contrasted to the modern world, where production appears as the aim of mankind and wealth as the aim of production. In fact, however, when the limited bourgeois form is stripped away, what is wealth other than the universality of individual needs, capacities, pleasures, productive forces etc., created through universal exchange? The full development of human mastery over the forces of nature, those of so-called nature as well as of humanity's own nature? The absolute working-out of his creative potentialities, with no presupposition other than the previous historic development, which makes this totality of development, i.e. the development of all human powers as such the end in itself, not as measured on a predetermined yardstick? Where he does not reproduce himself in one specificity, but produces his totality? Strives not to remain something he has become, but is in the absolute movement of becoming? In bourgeois economics -- and in the epoch of production to which it corresponds -- this complete working-out of the human content appears as a complete emptying-out, this universal objectification as total alienation, and the tearing-down of all limited, one-sided aims as sacrifice of the human end-in-itself to an entirely external end. This is why the childish world of antiquity appears on one side as loftier. On the other side, it really is loftier in all matters where closed shapes, forms and given limits are sought for. It is satisfaction from a limited standpoint; while the modern gives no satisfaction; or, where it appears satisfied with itself, it is vulgar.”

PS - Rough Theory has put up the first chapter of her reading of Capital. LI, like all readers of Marx, can only echo her introductory remark: "In this chapter, I explore just how difficult it can be to tell when it is safe to read Capital, by reconstructing what I take to be the main narrative arc for the opening chapter. To anticipate and foreshadow the argument I make below: my central interpretive claim is that this narrative arc is surprisingly difficult to find."
at January 29, 2009

LI, hmm, I am not liking that there is what appears to be an undeleted spam comment to this post. I hope it is not because of the scenario you mentioned earlier concerning your apartment situation.
I do love this post of yours. I'm afraid this comment will not do it justice as it goes wandering along a contre-allée.
Anyway, it made think of a passage in Kant re loftiness and limits. Kant writes that the sublime borders the limit of the monstrous (ungeheur). He also writes, in order to guard off the monstrous perhaps, that "the authentic sublime cannot be contained in any sensible form." But there is a passage where Kant touches or transgresses this limit and prohibition. It occurs in a footnote, a mere supplement. Here it is:

One has perhaps never said anything more sublime or expressed a thought in more sublime fashion than in the inscription on the temple of Isis (mother nature): "I am all that is, that was, and that will be, and no mortal has lifted my veil."

LI, what self-respecting modern has not wanted to lift, raise, tear off this veil - or limit? And to view what? In view of what satisfaction?

Well, I don't want to get all vulgar so let me quote Goethe instead. Who famously said that "Isis has no veil." Who was very interested in science, and owned a painting depicting Isis with multiple breasts and her lower body tightly wrapped and covered. Who wrote this:

Mysterious in broad daylight, Nature does not let herself be robbed of her veil, and what she does not wish to reveal to your mind, you could not constrain her to
do with levers and screws.

I was going to add a Nietzsche passage from #4 of the preface to the Gay Science, but am too tired to translate it right now and its play on Gründe.

I deleted the spam.
Interesting remark from Kant. And that veil. Which, I think can run from the sublime to the burlesque - from Isis to Gypsy Rose Lee, form Goethe to va va va voom - the epitome of vulgarity. I don't have access to Grundrisse in German, so I don't know if Marx used Roheit for vulgarity. But it is a word with a career in the Marxist world, isn't it? Vulgar Marxists, who are always claiming that there is nothing complicated about Marx. Or claiming that this or that interpretation is too fancy, too frivolous, too unrespectful, all of which, of course, might be true.

Still, Marx is using it in the same way that a reactionary like Flaubert would use the word. Or - to get to another theoretician of the sublime - Burke. Although Burke would talk of the swinish multitude, whereas Marx saw the swine transformed into the svelte and sleek bodies of Victorian rentiers and stockjobbers, of French newspaper owners.

Vulva is etymologically related to vulvere, or so I have read - to unfold, a covering - a veil, if you will - while vulgar's root is different, from thronging, pressing. By accident they turn up vul-s.

I found it in German!