Marx and the devil 2 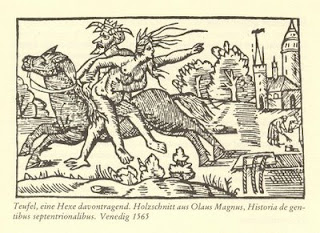 Wendelin: “The devil is not the worst by far, I can deal better with him than with many people. He honors the elderly, his grandmother stands high in his regard, and that is a fine character trait. When he shakes hands he means it, one can see that he has had much to do with knights; he fills his end of the contract much more promptly than many an earthly dirty dealer. Of course, afterwards, on the delivery date, then he comes on the very minute. On the stroke of twelve, he grabs his soul and goes, with beautiful regularity, with it back to to his house in hell. He’s really a proper businessman, he is.”
Pfrim: I am too old, a satanic pact wouldn’t do me any good now, but when I was as young as you – my soul, I didn’t know what to do with my soul. -Nestroy, Hollenangst

What Marx means here by a general commodity is one so purified of its mortal nature, as a use value, that it has been entirely transfigured into a pure commodity, unsoiled by human hands. Particular commodities, on the other hand, like Goethe, have two souls within their breasts – longing to be exchange value, and ending up as use value. In fact, in their end is their justification, at least in one of the social spheres that, altogether, constitute the total society. Yet it turns out that the use value of exchange value embodied in money is involved in a self-referential bind – it can’t quite dematerialize itself. Like the money in Taussig’s story, quarreling in the cash register, money is always in the process of shedding its nature, which is to be an intensional object – dependent for its meaning and existence on a social attitude – and presenting itself as something independent and even autonomous. There have been many dreamers of a utopia of money, in which something would simply be recognized by all as a measure of value outside of all social relations – although, alas, this impossible object would have to fall into the world again if it is actually to be exchanged – that is, if it is actually to be of use. The flies in the spider web dream of the superfly that would deliver them. It is part of the fallen nature of money that, strive as we will to find that unit outside of the social that will operate immaculately inside the social, it always reflects the particular conditions of exchange.

“But on one side, exchange value naturally remains at the same time an inherent quality of commodities while it simultaneously exists outside them; on the other side, when money no longer exists as a property of commodities, as a common element within them, but as an individual entity apart from them, then money itself becomes a particular commodity alongside the other commodities. (Determinable by demand and supply; splits into different kinds of money, etc.)”

When Marx talks like this, of “sides”, what is he saying? Where do these sides exist? This question isn’t impertinent – that is, it isn’t as though the sides are ‘metaphors’ for a logic of, say, the spirit. Later on, Marx will make a note that he has to express these things less “idealistically”. But we can see that these sides are not arising in the kaleidoscopic turns of the Absolute spirit. They are happening in the here and now. They have an actual social existence – that is, the sides are performed. In a sense, this is what is happening in Taussig’s story of baptized money. But it is also what is happening when money exists as, so to speak, an infinitely deferred referent. The wealthy or enterprises concerned with wealth have, so to speak, assets in money, but the real existence of that money is another matter entirely. I’ll earmark, here, a thread I will go into later - I am going to reference another anthropologist, George Marcus, about existences visible and invisible in a future post – Marcus was fascinated by the invisible world of wealth among the American wealthy.

“The dissolution of all products and activities into exchange values presupposes the dissolution of all fixed personal (historic) relations of dependence in production, as well as the all-sided dependence of the producers on one another. Each individual’s production is dependent on the production of all others; and the transformation of his product into the necessaries of his own life is [similarly] dependent on the consumption of all others. Prices are old; exchange also; but the increasing determination of the former by costs of production, as well as the increasing dominance of the latter over all relations of production, only develop fully, and continue to develop ever more completely, in bourgeois society, the society of free competition. What Adam Smith, in the true eighteenth-century manner, puts in the prehistoric period, the period preceding history, is rather a product of history.”

The all-sided dependence of the producers – in this way, the people come into history. In this way, the caterpillars begin to develop wings. In this way, universal history is born. This is one of the contradictions that gets in the throat both of capitalism and Marxism. There is, on the one hand, an all-sided dependence that breaks man out from the condition of idiocy, of private servitude and local superstition, in which he had been bound. But how does this happen? It happens through the division of labor, and the de-personalizing of the routine of labor. Just as with the peasants of the Cauca valley, the dominance of exchange value over all other market systems – of which we now have an extensive anthropology, thanks to Polanyi – produces not the all sided perfect man, using Forster’s capacity for perfection, but an all-sided wage laborer – besieged, as it were, on all sides. Where you gonna run to where you gonna go? Well the rock won’t hide you, and the rivers are bleeding. And after the revolution, what is to become of your all sidedness?

“Just as the division of labour creates agglomeration, combination, cooperation, the antithesis of private interests, class interests, competition, concentration of capital, monopoly, stock companies – so many antithetical forms of the unity which itself brings the antithesis to the fore – so does private exchange create world trade, private independence creates complete dependence on the so-called world market, and the fragmented acts of exchange create a banking and credit system whose books, at least keep a record of the balance between debit and credit in private exchange. Although the private interests within each nation divide it into as many nations as it has ‘full-grown individuals,’ and although the interests of exporters and of importers are antithetical here, etc, etc., national trade does obtain the semblance of existence in the form of the rate of exchange. Nobody will take this as a ground for believing that a reform of the money market can abolish the foundations of internal or external private trade. But within bourgeois society, the society that rests on exchange value, there arise relations of circulation as well as of production which are so many mines to explode it. (A mass of antithetical forms of the social unity, whose antithetical character can never be abolished through quiet metamorphosis. On the other hand, if we did not find concealed in society as it is the material conditions of production and the corresponding relations of exchange prerequisite for a classless society, then all attempts to explode it would be quixotic.)”

Later on, Marx will make a note that he has to express these things less “idealistically”.

Problem is, I'm not sure Marx ever gets around to this :-) - the sheer amount of time I find myself spending in my thesis, quoting some "idealist" phrase, and saying "What Marx means by this is..." - something that sounds like the opposite of the phrase... ;-)

But grounded at the moment from blogging :-) Apologies for the drive-by nature of the comment... :-)

Well, if Marx then wrote a book about what he meant, he'd have to write another one and - well, we'd be in a Borgesian short story!

Myself, I think the whole materialism idealism vocabulary has aged badly. It came out of a philosophical-theological debate, and Marx is never more the grad student than when he is employing that provincial vocabulary. By grabbing materialism and applying it with fine abandon to something nobody had called materialist before, he did a clever outlaw thing - threw his trackers off the scent! - but it wasn't worth it in the end.

This is the absolutely perfect observation! :-)

But yes: a good friend who was looking over my shoulder in the early stages of the thesis kept just ogling over why anyone would say what I claim Marx is saying, in the way Marx is saying it. It's just massively not worthwhile, from the standpoint of communicating the points to any likely audience - but there's a certain inertia to the vocabularies we think with. Marx in his own strange way is consistent to his notion that production only takes place by changing the form of the materials lying around - and these were, I guess, his materials... Given the materials, what he makes is quite clever in a deeply perverse way - but it doesn't translate well for anyone not trying to build with the same conceptual vocabulary ready to hand...

And some of the vocabulary - the inflections of the term "science", for example - has aged badly in ways that are less idiosyncratic to Marx...

As for the risk of infinite Borgesian regress if Marx wrote meta-books: I'd settle for a bit of good old fashioned Hegelian inconsistency in Marx's texts - if prefaces and stage whispers that violate the explicit method are good enough for Hegel, why should Marx pass them by? ;-)

NP - your last graf is, I think, why so many people - why I - like the Grundrisse so much. Because it seems to be full of stage directions. Exit with bear and all that.

As for Marx's vocabulary. I agree, but then I think, he's there at the beginning. He has to make things up as he goes along. So that a century and a half later, I can say, of course, he wants to make the social turn, and smile smugly - although the whole "turn" business might seem pretty odd two hundred years hence. With its idealistic presupposition - so strangely Hegelian - that we are conceptually taking turns, in what? The unfolding of the absolute spirit or something? Or are we turning to, as though we inhabited a "space" - Marx might laugh at this talk in turn, whereever he is now, no doubt drinking a beer...

By the way, I should have linked to your last post, which in a way made me think I should devote a thread to the Grundrisse.