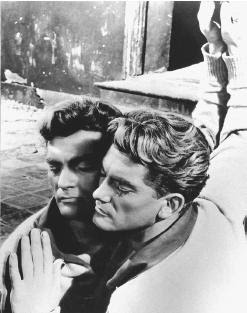 The best thing in the paper is James Glanz’ article about the militias in Basra. It almost counterbalances the incredible load of bullshit dumped by Sabrina Tavernise on the innocent reader who desires some clue as to what is going on in Iraq. Think back to the glory days, when NYT journalists were wondering whether Chalabi would be prime minister, or whether the Iraqis would just, unanimously make him king. Tavernise accurately reflects the policy of disconnect and denial that obviously rules in the Bushian Green Zone.

And talking about disconnect and denial – in the Book section there is an essay that drags literature into the ever disheartening world of the Glamour dating quiz by Rachel Donadio. The blogs will be over this like white on rice, and LI, following our new, Lady Bitch Ray driven sprint for popularity, will join them to say that the interesting thing about the essay is the way it tiptoes around a major issue – the startling decline of intelligence among our former lords and masters, the white American male. Ostensibly about conflicting tastes in books and how this plays out in the Indie movie of Valentine Heart relationships that the NYT so cherishes – its bourgeois breath down your neck, you Lords of Acid scumbags – the quotes make it quite clear that the state of play in America is between Dumb and Despairing:

“Let’s face it — this may be a gender issue. Brainy women are probably more sensitive to literary deal breakers than are brainy men. (Rare is the guy who’d throw a pretty girl out of bed for revealing her imperfect taste in books.) After all, women read more, especially when it comes to fiction. “It’s really great if you find a guy that reads, period,” said Beverly West, an author of “Bibliotherapy: The Girl’s Guide to Books for Every Phase of Our Lives.”

Or this: “Manhattan dating is a highly competitive, ruthlessly selective sport,” Augusten Burroughs, the author of “Running With Scissors” and other vivid memoirs, said. “Generally, if a guy had read a book in the last year, or ever, that was good enough.”

Burroughs, however, shows himself a putz in the next sentence: “As he walked to meet him outside Dean & DeLuca, “I saw, to my horror, an artfully worn, older-than-me copy of ‘Proust’ by Samuel Beckett.” That, Burroughs claims, was a deal breaker. “If there existed a more hackneyed, achingly obvious method of telegraphing one’s education, literary standards and general intelligence, I couldn’t imagine it.”

Unwittingly, Burroughs puts his finger on the reason for the stark, hopefully reversible night of ignorance that has fallen on a way too significant portion of the American Male population: the treatment of books as so much fucking impression management in the always popular "hot or not!" contest our dreamland of American Idol judges has cooked up as a national past time. LI could give a fuck about the number of books someone reads, of course - read one, read a hundred thousand. It is the intensity of the third life that counts, the willingness to lose yourself, and to even ask, in the immortal words of my best friend David: what's so important about your life? If you have never gone, like Orpheus in Cocteau's movie, through the mirror, then fuck you, you a nasty motherfucker - that's our general attitude, copped from Kimberley Jones, and we're stickin' with it. The third life switch from literature to action movies and war games affected by the male population is the vast, social wart on our behemoth Uncle Sam’s body – in fact, the wart has taken over the head. Athena’s curse of ate – blindness – is upon the sex. Remember, the next time you hear some bourgeois idiot like Burroughs make fun of some soul reading a used book, or – dating advice from LI! – the man you are going out with calmly states he isn’t a “reader”, look closely at his mouth. The blood of Iraqis is dribbling from his lips.
at March 30, 2008

She twisted a bottle in the ice.
"It will be cold in ten minutes."
"It's a long time," said Henri.
"Yes, it is a long time."
"The war will also last. We have not finished waiting."

Does genre fiction count? I am re-reading my favorite steam-cyberpunk series by a Marxist economics student in Britain. :) Am I worthy?

Hmm, I published a comment and it hasn't appeared. Who's running this joint, anyway?
Anyway, as we all know, Brian, you have been anointed with holy oil.

It is interesting how farce dogs the critical intelligence in this country, even as that critical intelligence comes down with a bad case of Tourette's - as my own so often does. From the Business section of the NYT comes a story, today, about a male "date blogger", a Mike Cherico, from Glamour who apparently pissed off enough readers to get bounced.

"According to Mr. Cherico, there were plenty of women who wanted to offer him other things. “I would say I wrote a blogging column for Glamour, and actresses and models would give me their number,” he said in a telephone interview. “I’m a decent-looking guy and kind of charming.”

Ultimately, that charm wore thin. ”The majority of the community stopped responding to Mike,” said Ms. Seidman. “They were no longer into what he was saying and posting.” The last straw, perhaps, was Mr. Cherico’s less than gallant account of his relationship with a woman he referred to as Miss Smarty Shoes (1500 SATs and many pairs of footwear).

In response, Miss Smarty Shoes created a blog to take Mr. Cherico to task for his manners, his morals and his failings as a lover, then linked it to his comment board. “That really stoked the flames,” said Mr. Cherico who became an object of derision for media sites like Gawker, Defamer and Jezebel.

“I felt my blog was strictly for entertainment purposes,” he said. “I tried to push the envelope of being edgy, and I think that was my demise.”

Amy Barbee, a psychologist who says she is Mr. Cherico’s off-and-on girlfriend of two years, doesn’t mince words. “Mike can be a real jerk — he deserved some of this,” she said. “But since the blog’s ended, he’s been an angel. If another blog landed in his lap, I’d be out the door.”

Today, Glamour is introducing a new dating blog, Single-Ish, with a man and woman taking turns.

As for Mr. Cherico, he is looking for an agent to represent him for a book “about the rise and fall of a dating blogger.”

Single-Ish. I'm solidly on the side of the combination of black magic and liberalism, but in the face of Single-Ish, I have to bow my head to the forces of white magic. The Dunciad wins another round.

LI, it is strange that the french name for Trier - Trèves - is a word that means "truce" and figuratively "respite", as one is hard-pressed to find any sense of truce and respite in Le bleu du ciel with its dizzying vertigo.

LI, far be it for me to offer advice on “Manhattan dating" which "is a highly competitive, ruthlessly selective sport,” no doubt, though maybe not quite as the good Augusten Burroughs fantasizes.
But I was thinking that “Generally, if a guy had read a book in the last year, or ever, that was good enough” might be too much to ask for, so how about if it is limited to an essay, say the Caillois one on The Praying Mantis.
Would it be asking too much to bring up the french title La mante religieuse, which of course also reads as L'amante religieuse?

Amie, if someone brings up la mante religeuse, dating goes out the door and real life enters with a bang and one wakes up later, the restaurant is closing, the waiter is standing at the table, the walk to the car or the cabstand or the bus is a dream and the object of it may be forgotten in another bar, a park, a Bollywood musical, bed, or you might just end up turning the corner and find yourself in Mexico City.